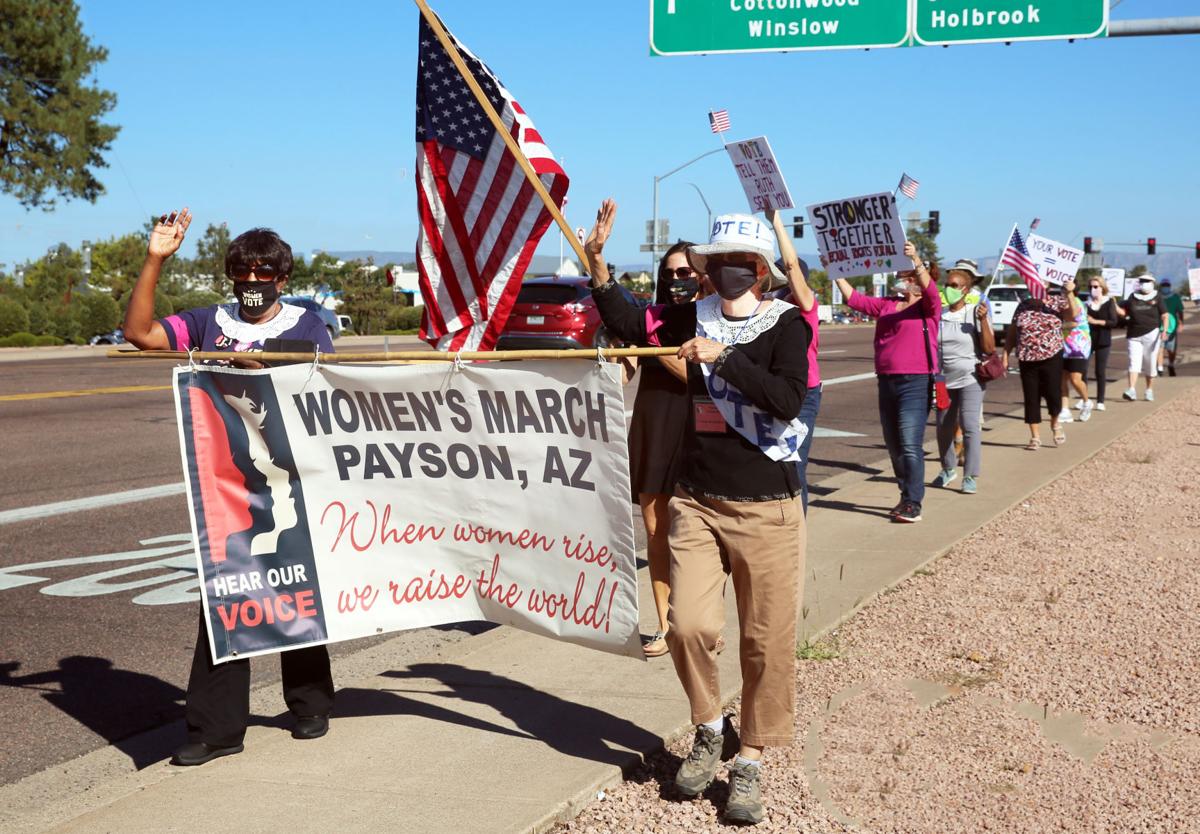 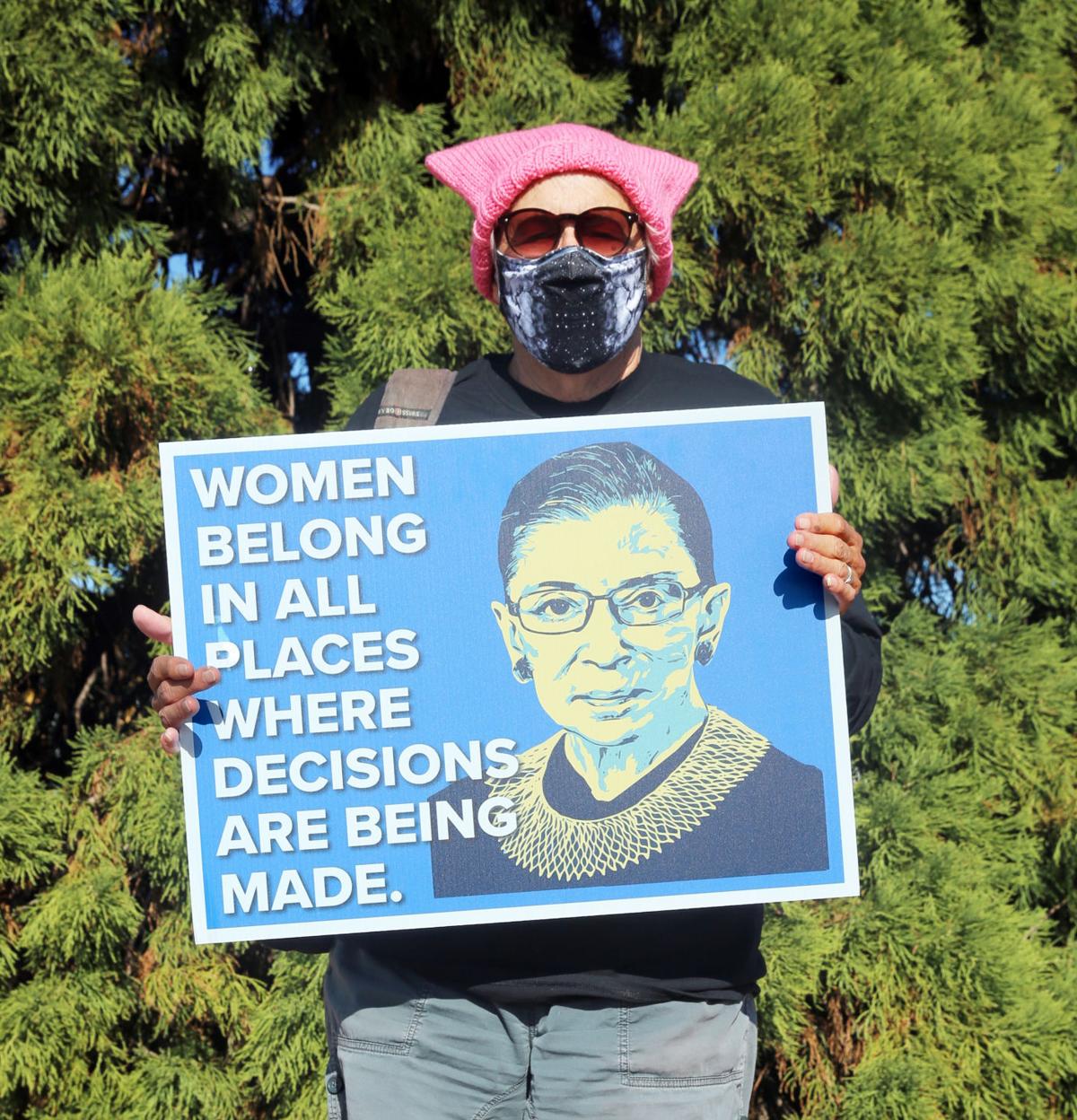 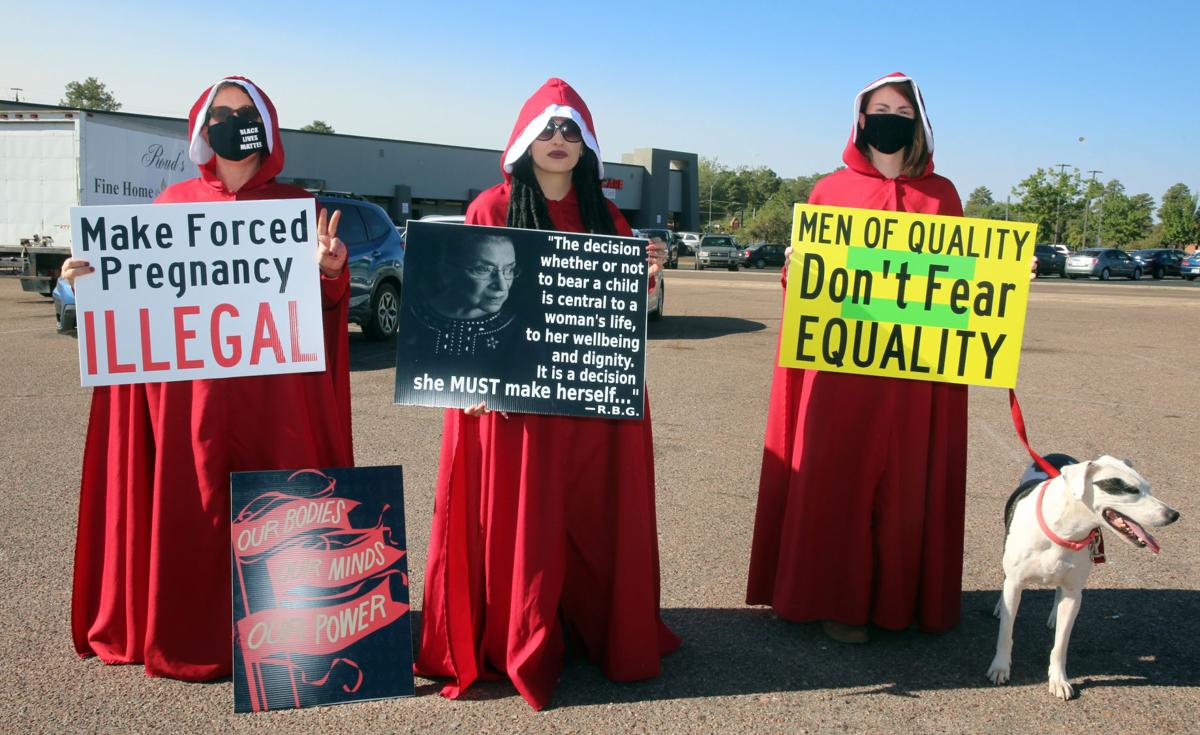 Local women wear “The Handmaid’s Tale” robes to express their fears over loss of rights if Justice Ruth Bader Ginsburg’s seat is replaced before the election. 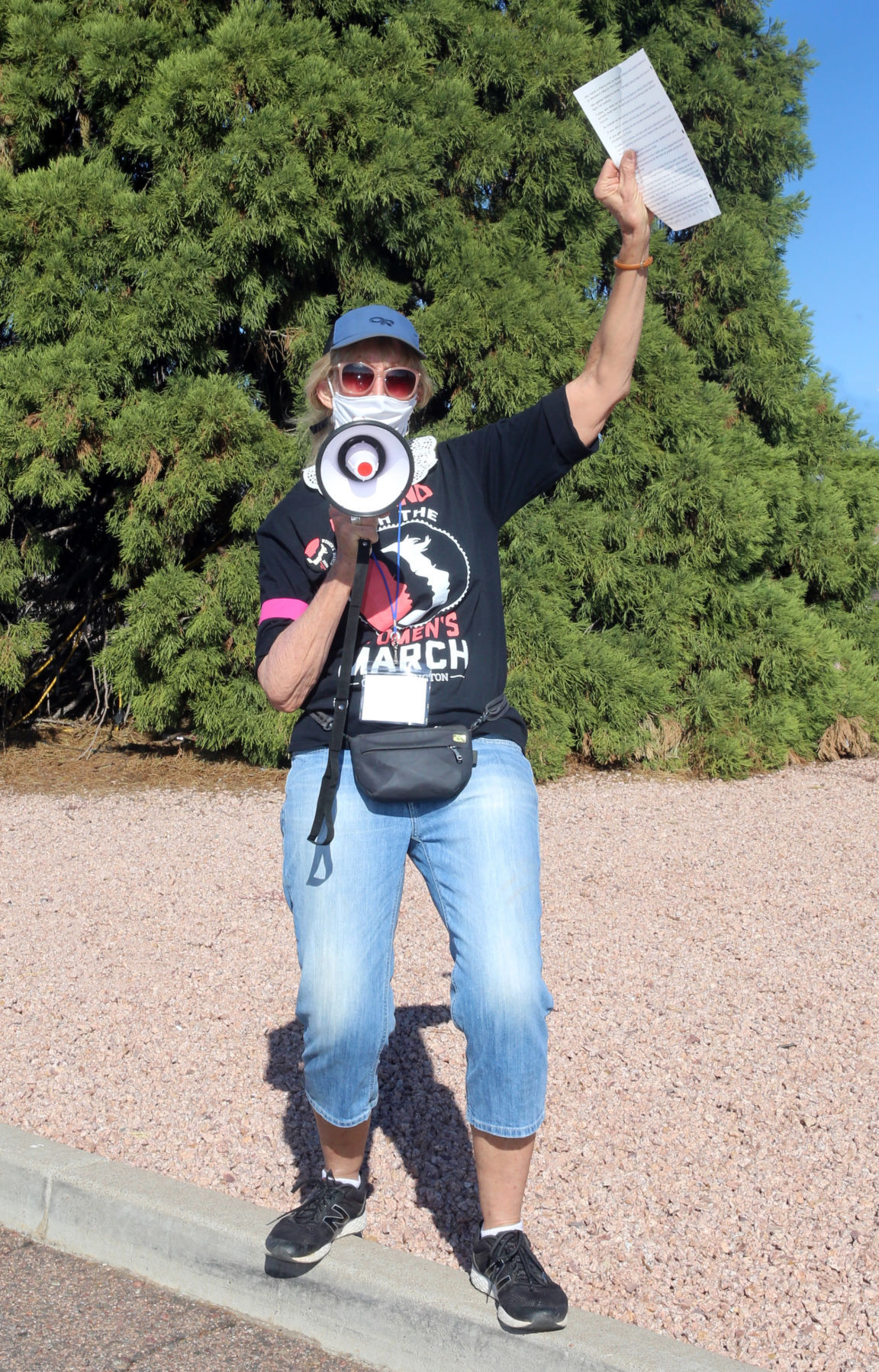 Penny Navis-Schmidt rallies the marchers participating locally in the world wide Women’s Day March before they walked from the junction of Highways 260 and 87 down to Bonita Street. 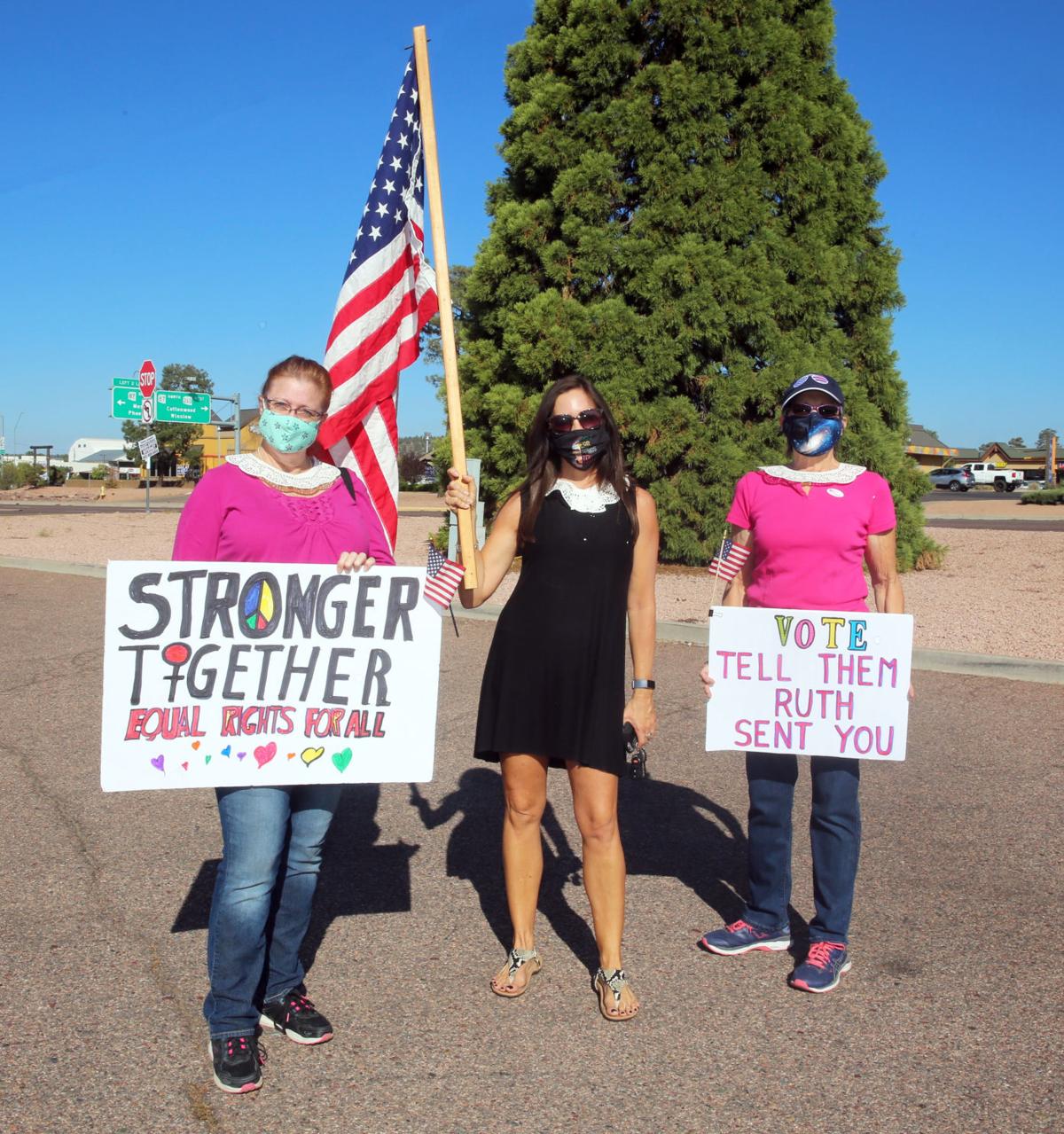 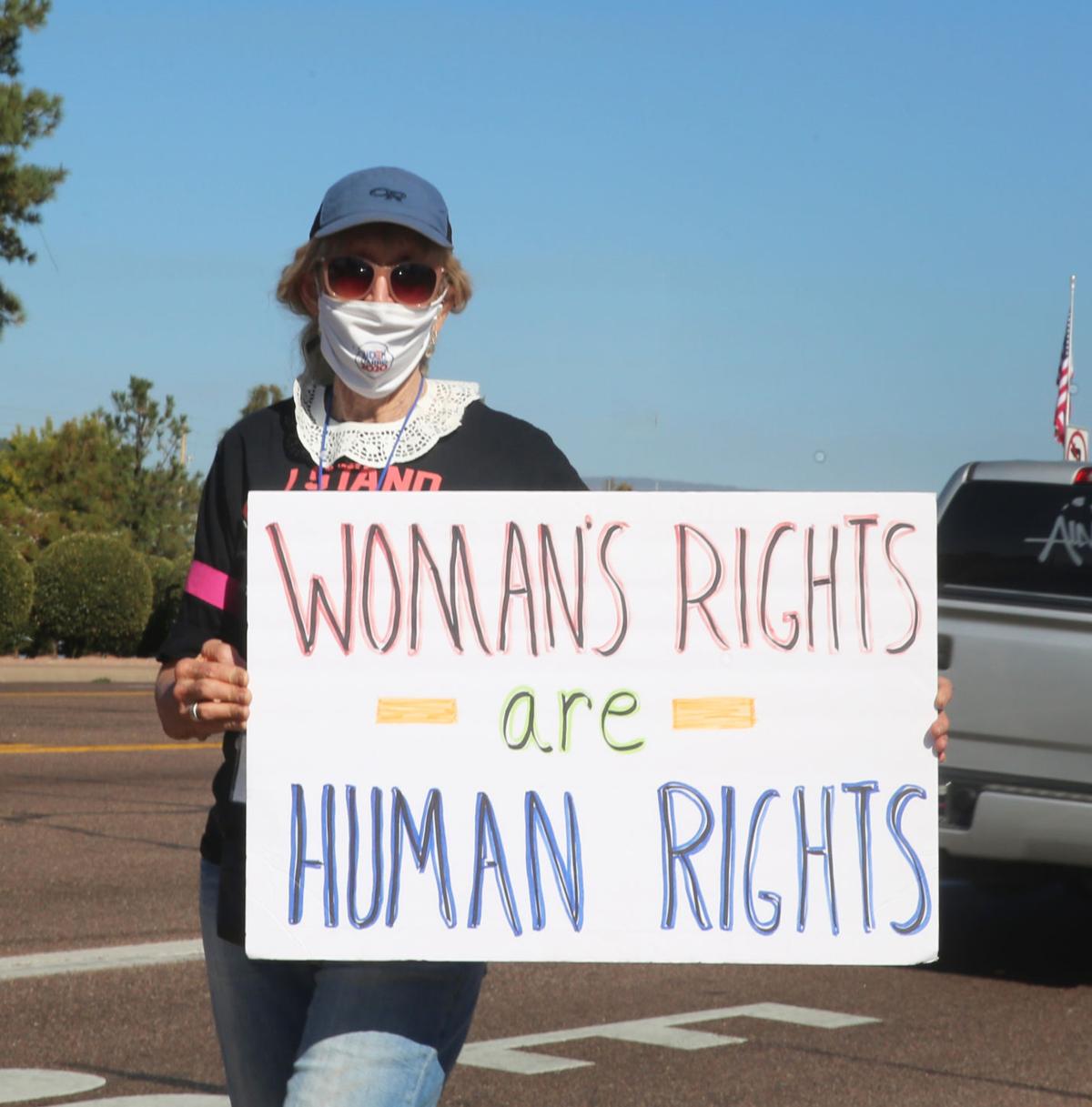 Penny Navis-Schmidt reminds everyone that Women's Rights are Human Rights.

More than 50 local marchers embraced the theme of the worldwide Women’s March — do not rush to replace Supreme Court Justice Ruth Bader Ginsburg.

For three years, organizers have put together a march to highlight women’s issues.

To celebrate this year’s theme, many participants wore the iconic lace collar Ginsburg donned during her tenure on the Supreme Court bench.

“Today, we stand with thousands of women, men and children and we send an unmistakable message of our fierce opposition to the current administration’s refusal to honor Justice Ginsburg’s final wish, that she not be replaced until a new president is installed,” said Penny Navis-Schmidt in opening remarks.

In a metaphorical move, three local women marched in the bright red robes depicted in the novel and TV series the “The Handmaid’s Tale.”

“We were blown away,” said Navis-Schmidt.

“The Handmaid’s Tale” imagines a world where women cannot own property, handle money or read. They may only work in limited roles, such as slaves to the birthing and child-rearing process.

Others marched over their fears the court will overturn the Affordable Care Act, said Navis-Schmidt.

The Democratic Women’s Caucus, along with other organizations, pulled together the march for Oct. 17, said Navis-Schmidt. The organizers agreed “when we are in the midst of an election” it is not the time to fill a Supreme Court position.

“There are so many things that Ruth Bader Ginsburg stood for that have the potential to be lost,” said Navis-Schmidt.

She then listed the many rights Ginsburg gained for women and men in the cases she argued in front of the court; the right for a single woman to open a bank account, credit card, or receive a loan to buy a new house in her own name.

The right for a woman to hold any job.

The right for a pregnant woman to keep her job.

The right to marry the person you love, regardless of their gender.

“If you don’t even know the number of rights you have, because there are too many to count, or maybe because you just take them for granted, you have Justice Ginsburg to thank,” Navis-Schmidt told the marchers.

The marchers wore masks and socially distanced “in honor of the victims” of COVID-19, said Navis-Schmidt.

“We raise our voices, and we vote, so that Ruth Bader Ginsburg’s legacy continues,” she concluded.

The marchers then walked in a loop from the Hwy. 260/87 intersection to Bonita Street.

How is replacing one female judge with another (with the timing in full accordance with the established rules) an infringement of or setback to women's rights? True, ACB believes in in making rulings that align with the Constitution, whereas RBG very often based her decisions solely on her personal beliefs. But a fear of that change is still not a reason to delay a legitimate process. Making law is a responsibility of the Congress and the legislatures, not jurists.