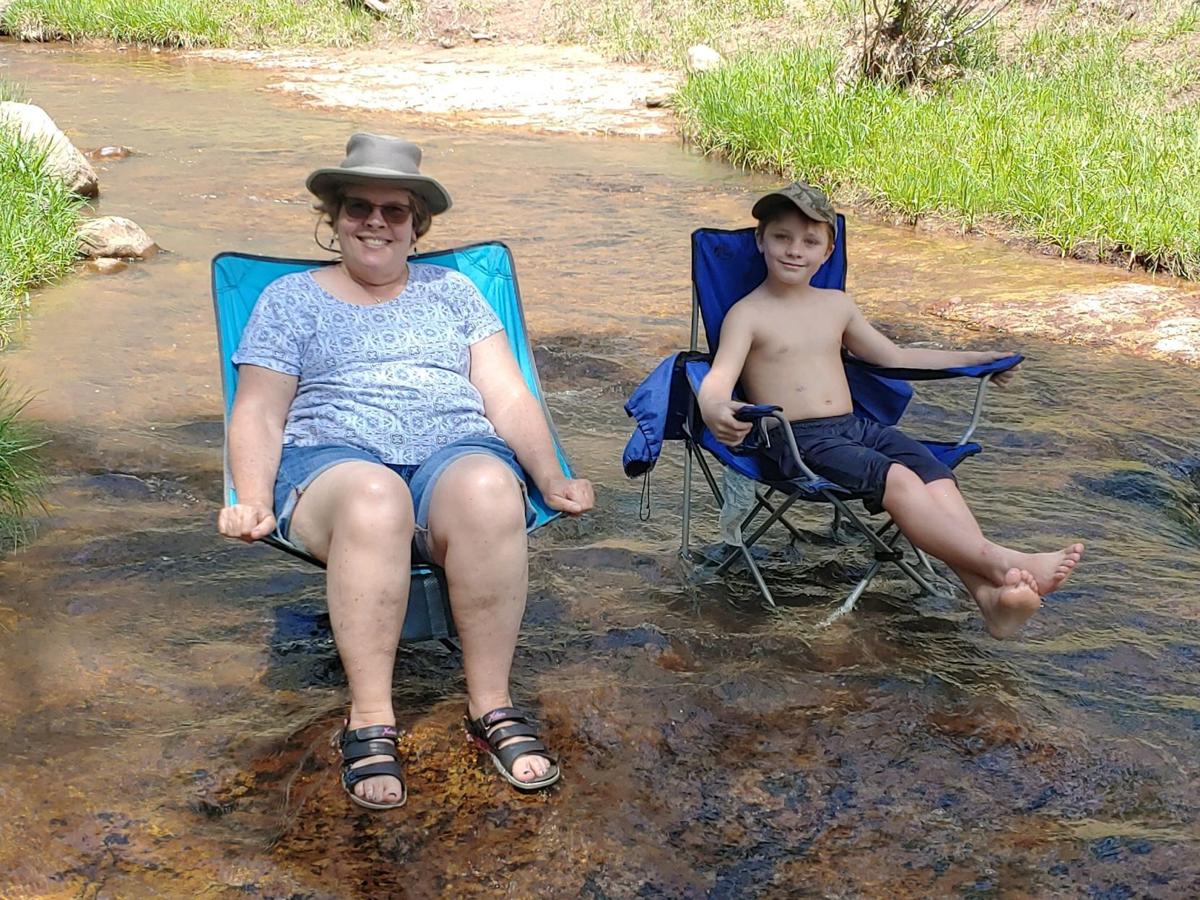 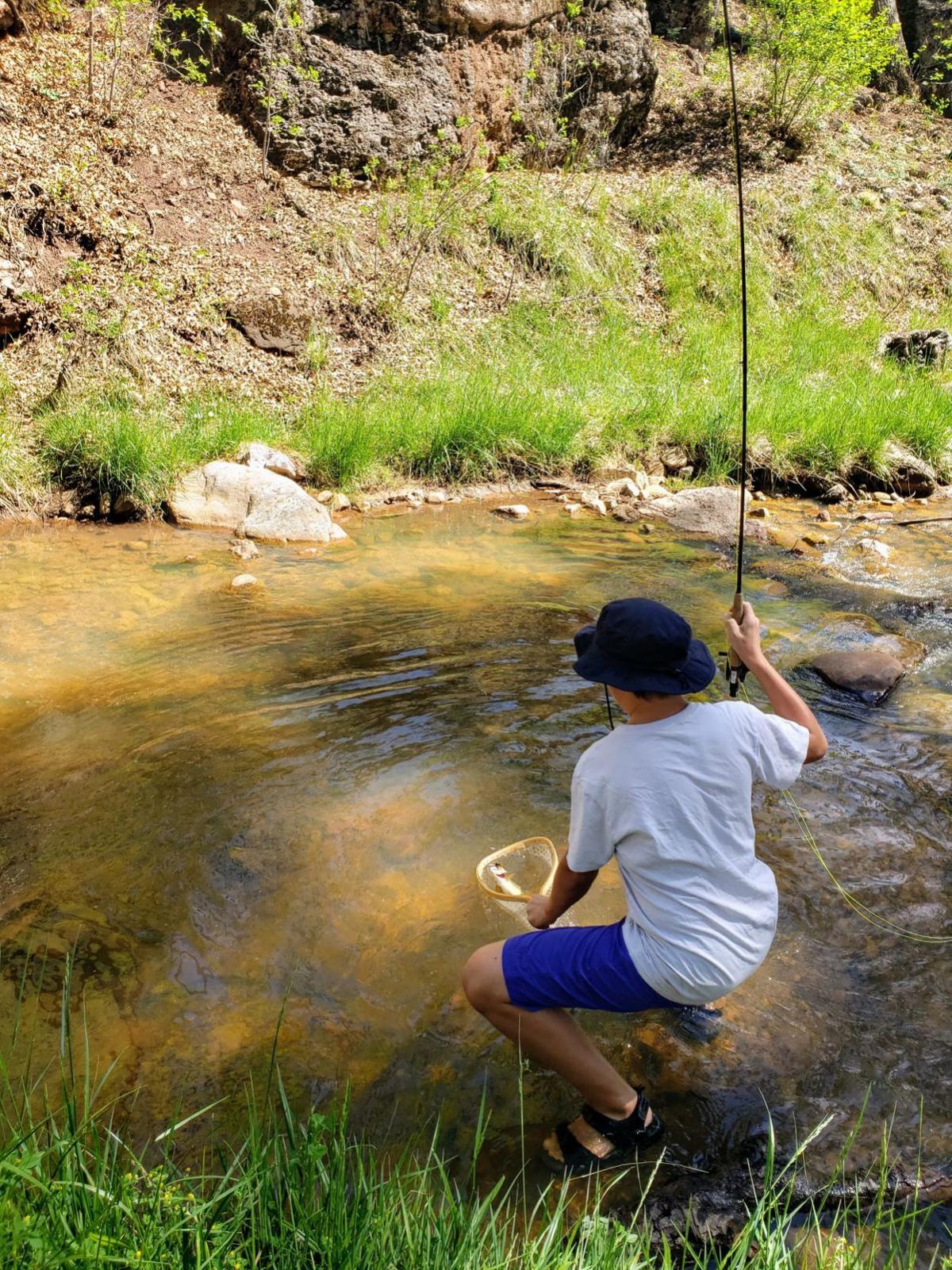 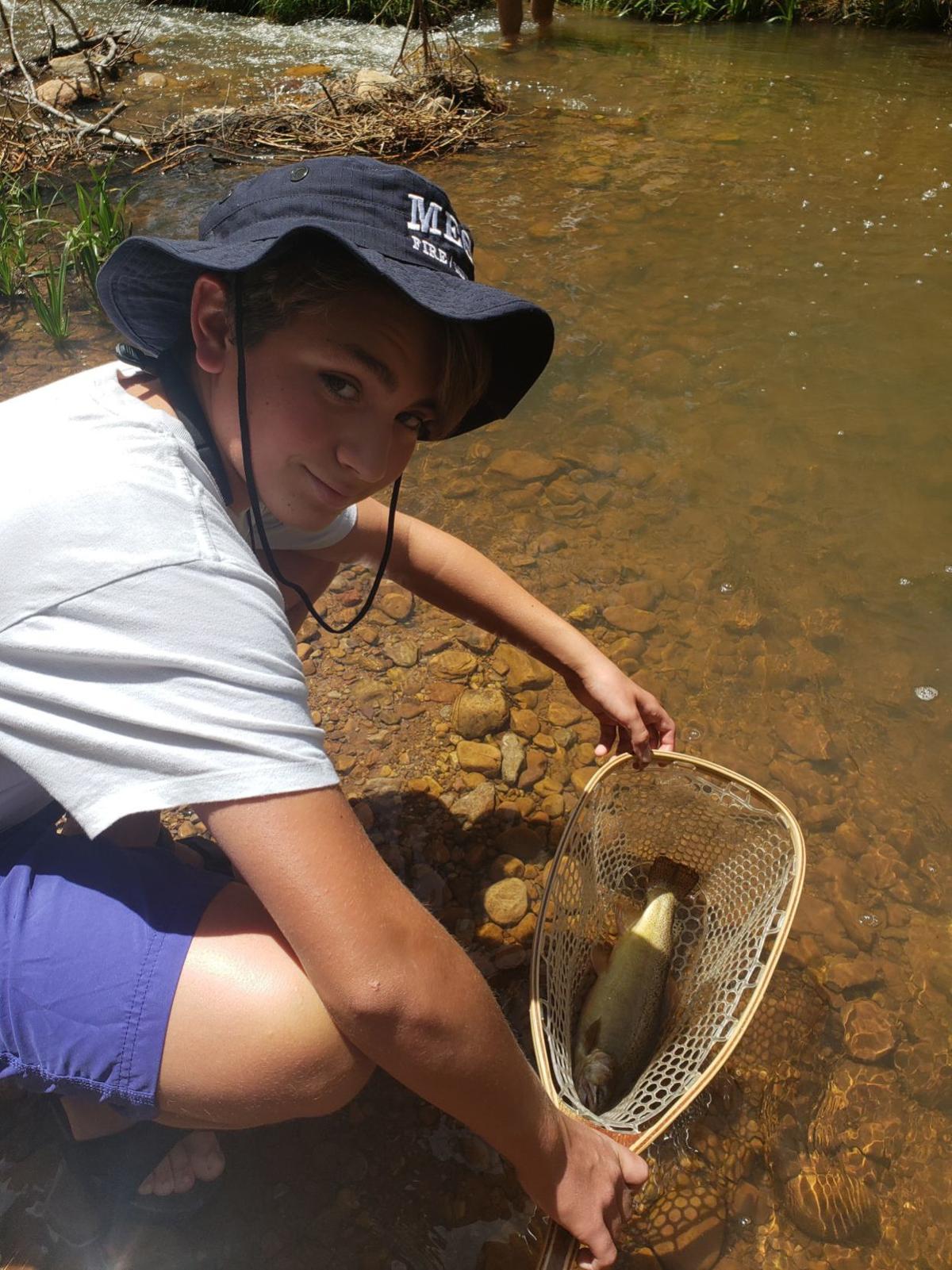 I love fishing with my grandkids any chance that I can. With social distancing restrictions, it has been a long time since my wife and I have seen our grandkids in person. We were thrilled to have the opportunity this past week when Owen, Ayden and their parents came up for the day.

We traveled in separate cars to the fishing destination and socialized at a distance. It was great being able to fish with my older grandsons again. They are both skilled fly fishers, but have distinct styles when it comes to fishing.

Owen, the 13-year-old, has started down a path very familiar to me. He loves to stream fish and will get lost in time in his fishing pursuits. More on that later. On this trip to the East Verde River, he was determined to catch his first Gila trout.

Ayden, 9, prefers several options on a fishing trip. He loves to catch fish, but is also content turning over rocks and looking for aquatic insects, or painting a watercolor scene with grandma. He likes a lot of action and success when he fishes, but even then he might only fish for an hour.

I found a pool where I thought both boys would have success. Owen was first up understanding that Ayden would get his shot after the first fish was caught. He missed two fish, but soon was in for quite a fight with a Gila that, when it finally came to the net, measured about 16 inches long.

Ayden stepped into casting position, and again almost immediately had a Gila on, but it quickly got off. He missed two or three more. Often, he could see the fish grab at his fly, but not really take it.

I did not have my fly rod with me. My role on this trip was guide and rod caddy. I had Owen’s rod in hand and suggested Ayden try Owen’s rig since the fish had seemed to lose interest in his fly. Sure enough, that produced more grabs from the fish, but he still couldn’t land one. I assured him he was doing everything right, but the lack of cooperation from the trout caused him to shift gears.

Both boys were wet from wading, and while Owen was freezing in the water, Ayden was soon sitting in the river having a blast. He and his dad started looking for aquatic insects, while Owen and I got back to fishing.

After lunch, Ayden and I looked for bugs in several sections of the river. We collected many dragonflies and mayfly nymphs, some beetles, and a variety of caddisfly larvae. We also observed several caddisfly cases that looked like gravel covered turtle shells stuck to the rocks. We were having a magnificent time NOT fishing.

Soon it was time for Owen and me to trek downstream and get serious about our fishing. He was laying out great casts and quickly landed another Gila. I shared that the Gilas in the East Verde were often very different from one another in their coloration, likely because of the different lineages they represented. While his first fish was a golden hue, this smaller fish was a two toned olive and brown.

We continued quite a way downstream, fishing likely pools and runs, until Owen spotted a garter snake in the water with half of its body sunning on a rock. He could not pass up the opportunity to try for the snake. He approached stealthily, but the snake ducked under the rock in the water. He carefully lifted the rock and gently grabbed the snake triumphantly for me to admire. After a minute, he put the snake back where he found it and was amazed how quickly it swam across the creek.

The next hole we fished really produced for Owen. He caught a large holdover rainbow trout and then missed a fish. In his haste to deliver another cast to the same spot, he tangled his line. Papa, the rod caddy to the rescue. I gave him the other rod, while I worked on the tangle. And in no time at all, he landed his third Gila trout.

We decided that we better get back upstream to check in with the rest of the family. What seemed like only a half hour, I guess, had turned into an hour and a half. I fully expected everyone to be lounging around the creek, and that I’d give Ayden another shot at the fish he missed earlier in the day. Oops.

Always make a plan when you separate while fishing and decide when and where you will meet. I knew that! My only defense, weak as it is, is that I was having a grand time with one of my grandsons watching him enjoy the river and some of its inhabitants, like I did when I was a kid, and obviously still do.