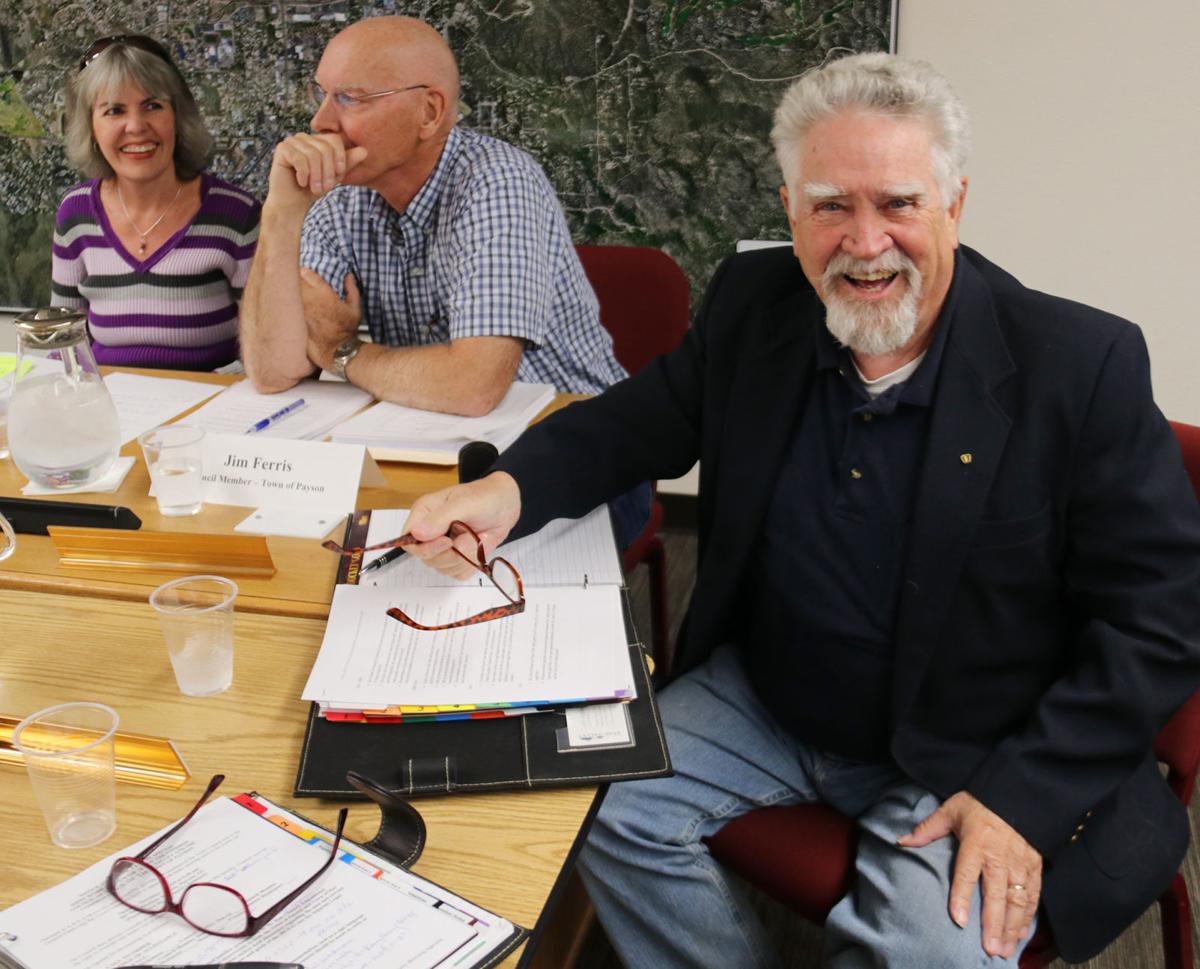 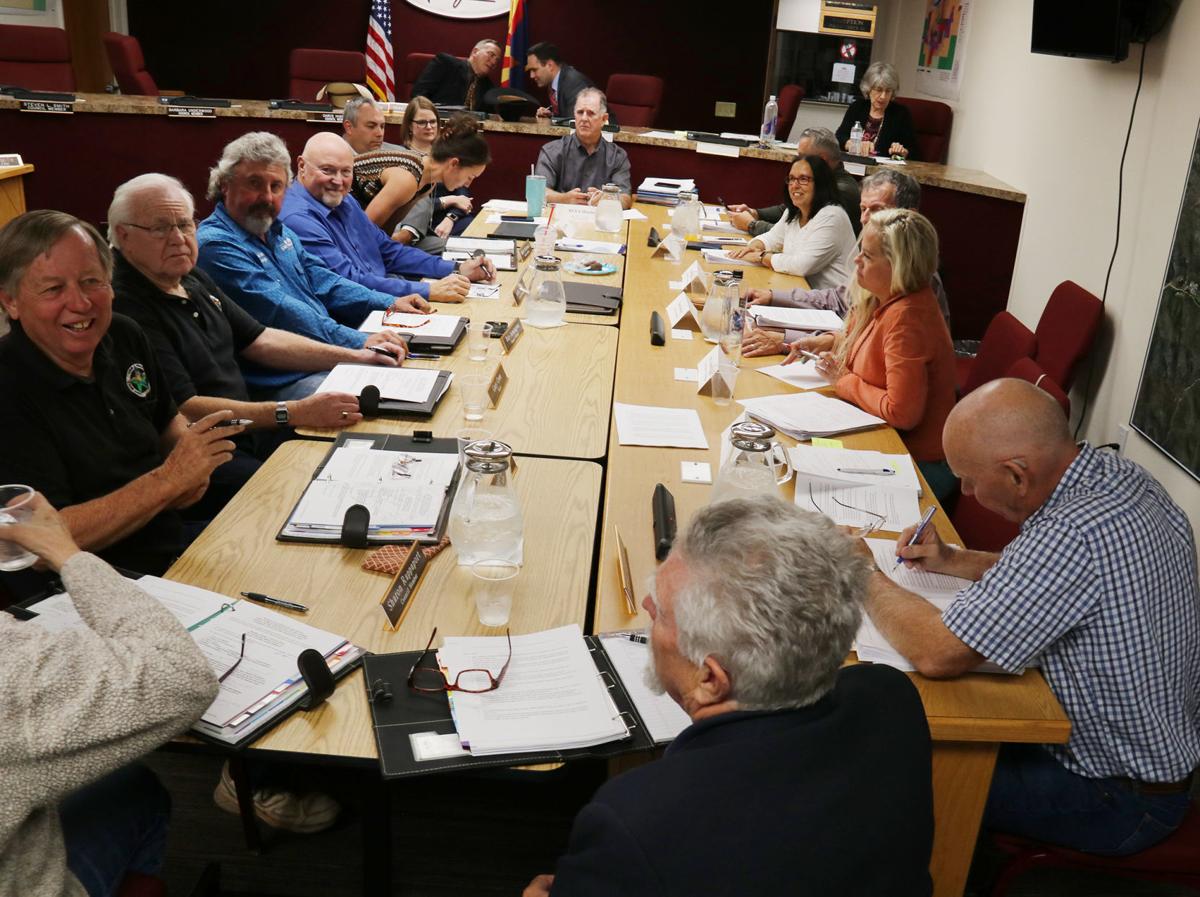 Seeking common ground, the Payson Town Council met with the Rim Country Educational Alliance separate legal entity board members about plans to build on the 253-acre site originally intended for a university campus, with members of the Star Valley council sitting by as mediators.

The rupture left little ground for cooperation between the Rim Country Educational Alliance (RCEA) and the Payson council majority. Star Valley and Payson jointly set up the SLE in 2011. The MHA Foundation has so far provided more than $10 million to develop the site, according to MHA officials. Plans for a university never came to fruition, but the RCEA now wants to build a prep school, ballfields and other facilities on a portion of the site fronting Mud Springs Road.

The already fraught relationship between the RCEA and the Payson council majority has been compounded by recall efforts launched against the entire council by competing factions.

The meeting last week started off with a tense exchange between Morrissey and Payson Councilor Steve Smith and remained tense with Payson Councilor Jim Ferris questioning Jennifer Smith, a board member of both the RCEA and MHA Foundation.

A summary of the complicated history to develop the university site immediately prompted verbal fireworks between Morrissey and Steve Smith.

“It was initially formed in 2001, who was mayor then?” Morrissey asked.

“Kenny Evans,” said numerous people in the audience. Evans is also chair of the MHA Foundation. The MHA Foundation helped as part of the driving force to bring a university to town.

Steve Smith asked, “Why was this question relevant?”

Morrissey responded, “Let’s not go there. Who is running this meeting? I opened the meeting and I am running the meeting.”

Ferris dominated much of the meeting. Ferris complained he could not get information about the MHA Foundation, which is a private, nonprofit organization not subject to open meeting law and freedom of information laws.

“What about just financial statements from year-to-year? That would be the core of what we asked for,” said Ferris.

“It is so tied in,” said Ferris. “Is there any cooperation between the RCEA and RCEF and the MHA Foundation? There is no separation.”

“They are independent entities. There is no connection there,” Jennifer Smith said.

The exchange only muddied the waters further. The RCEA and RCEF jointly own the university property. They are both funded almost entirely by the MHA Foundation. But each organization has its own board and rules under which they operate — including how much information they must disclose to the public.

During the exchange, one of the town attorneys said, “This is a work study, not a deposition.”

“Let’s cut the drama out,” he said. “Jim, I would like to make the conversation to be more than just between you two.”

Most of the documents Ferris asked for included information the RCEF and the MHA Foundation have no legal obligation to disclose — since they’re both private entities. By contrast, the RCEA created by Star Valley and Payson is subject to the same open meeting and freedom of information rules as town councils. The establishment of the RCEA provided tax advantages for investors and also gave the RCEA board authority over planning and zoning decisions on the 253-acre university property.

However, the RCEA has little money beyond what the MHA Foundation and the RCEF provide. The RCEA does own all of the university site, however.

As a result, the documents available from the RCEA Ferris obtained didn’t show much, he said.

Ferris called the documents the RCEA provided in response to his numerous requests in person and by certified mail, “really a joke and an insult to us.”

“Who makes the decision this is worthless?” he said.

“I had the floor Steve,” said Ferris. “I don’t know who you think you are, but I have the floor.”

Ferris held the floor for most of the hour.

Morrissey called for a recess to confer with attorneys.

He returned to say, “Councilor Ferris, (Star Valley) Mayor Coon and I have agreed to adjourn this meeting. We can come back, but maybe structure this a little better.”

Jennifer Smith provided background information on efforts to bring a university to Payson.

She explained, in a prepared statement, that two decades ago, local residents first raised the possibility of bringing Arizona State University to Payson.

The talks went public and swung into high gear a decade ago as town leaders sought input from residents and launched negotiations with the Forest Service to buy land for an ASU campus.

“Dozens of forums were held with the Payson community, spearheaded by Judie Lyon and the Volunteer Planning Committee,” said Jennifer Smith.

Informal polls revealed 93 percent of residents wanted to bring a four-year university to town. However, 70 percent objected to the town becoming the “local university financial partner,” essentially backing the project with tax money.

Payson’s town attorney at the time, Tim Wright, suggested setting up a higher education facilities district. The planning committee found issues with that legal structure, so settled on creating a separate legal entity, the RCEA.

The town asked that:

• Payson would not contribute financially to the project.

• The town would have no financial liability for the SLE’s actions.

• The town would not lend any credit authority to the project.

• The project would not impact the town’s bonding authority.

• The town would have no liability if the project failed.

Enter the RCEF, established by the MHA Foundation two years before the creation of the RCEA. The original mission of the RCEF focused on finding ways to increase local high school graduation rates and college attendance through fundraising.

Realizing the RCEF could serve as the financial conduit for money going to the RCEA for the university project, the board converted itself into a not-for-profit limited liability corporation three years after the RCEA was formed. The RCEF could now pay for the required environmental, archaeological, engineering and design studies, as well as impact fees for the university project.

This meant the RCEF could also privately weed through the numerous proposals flooding the project, said Jennifer Smith.

But the resulting complexity of the organizational structure aroused the suspicions of some residents.

Jennifer Smith said it’s nothing sinister — the RCEA is simply a landlord with few financial resources.

“We own 250 acres, there is some capital there,” said Jennifer Smith.

The MHA Foundation, on the other hand, has $40 million.

Therefore, the RCEF bridges the gap between the RCEA and the MHA Foundation, providing funding for development of land “for the health and education of Rim Country residents,” as stated in the organizations’ missions.

“It is so tied in. Is there any cooperation between the RCEA (SLE) and RCEF and the MHA Foundation? There is no separation.” Jim Ferris, Payson town councilor.

Look, everybody knows all these foundations are all connected and were designed and staffed to promote what ever Kenny Evans wants done. He is the force and power behind each of them. The current majority Town Council is directly opposed to his behind the scenes agendas along with his board sycophants. The firing of La Ron Garret (a Kenny lap dog) really threw a monkey wrench into their plans short term. May I suggest all of these front foundations be placed under one acronym, the A.D.A.D.I.D.O. The MHA land is their's to do as they please. Just don't try to involve the finances of the town, or it's taxpayers with MHA wants and their projects.

Our Mayor and Town Council are so unqualified and inept at going forward they can only focus on the past. When our town should be focused on building new relationships it is only billing legal hours.

There are some really heavy handed jerks on the Payson Town Council - I dealt with some just like them when I was on the Council. Really sad in a small town.....