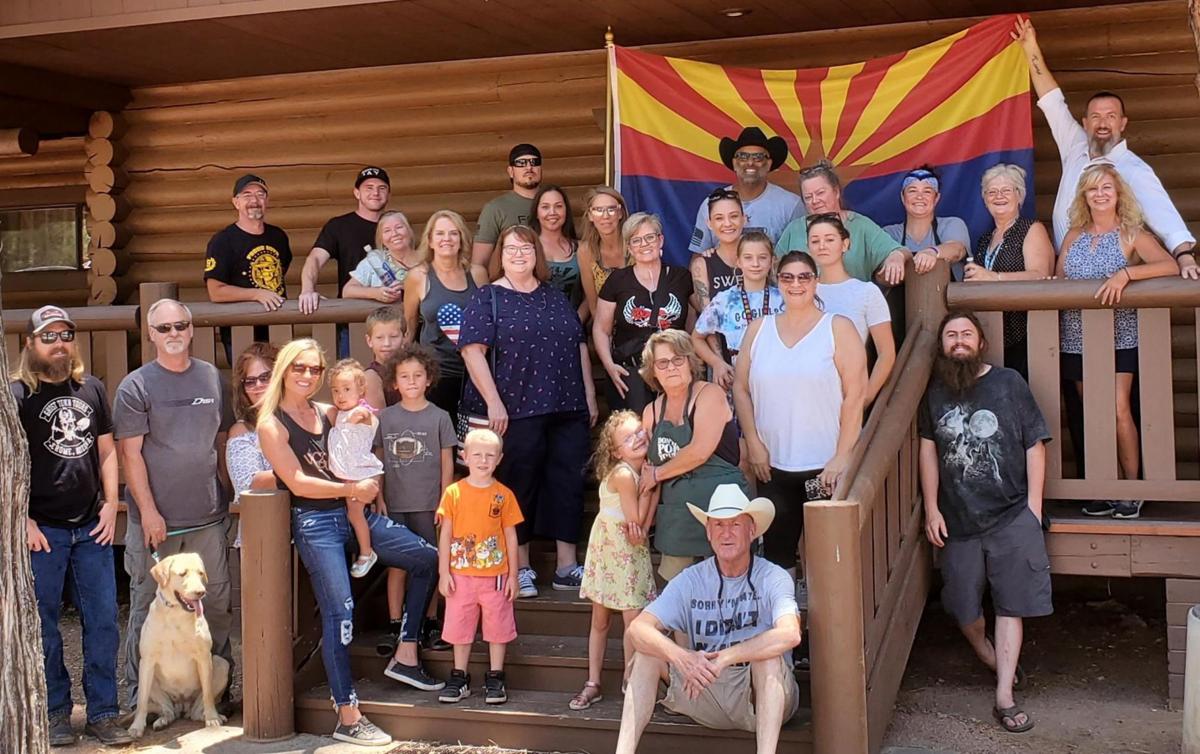 Gwen Zorn (center black shirt with wings) surrounded by donors from the Valley organized by a friend of Zorn’s. The group brought up bedding for 60 firefighters, two pallets of water and other drinks, food and other needs for evacuees and those fighting the fire. 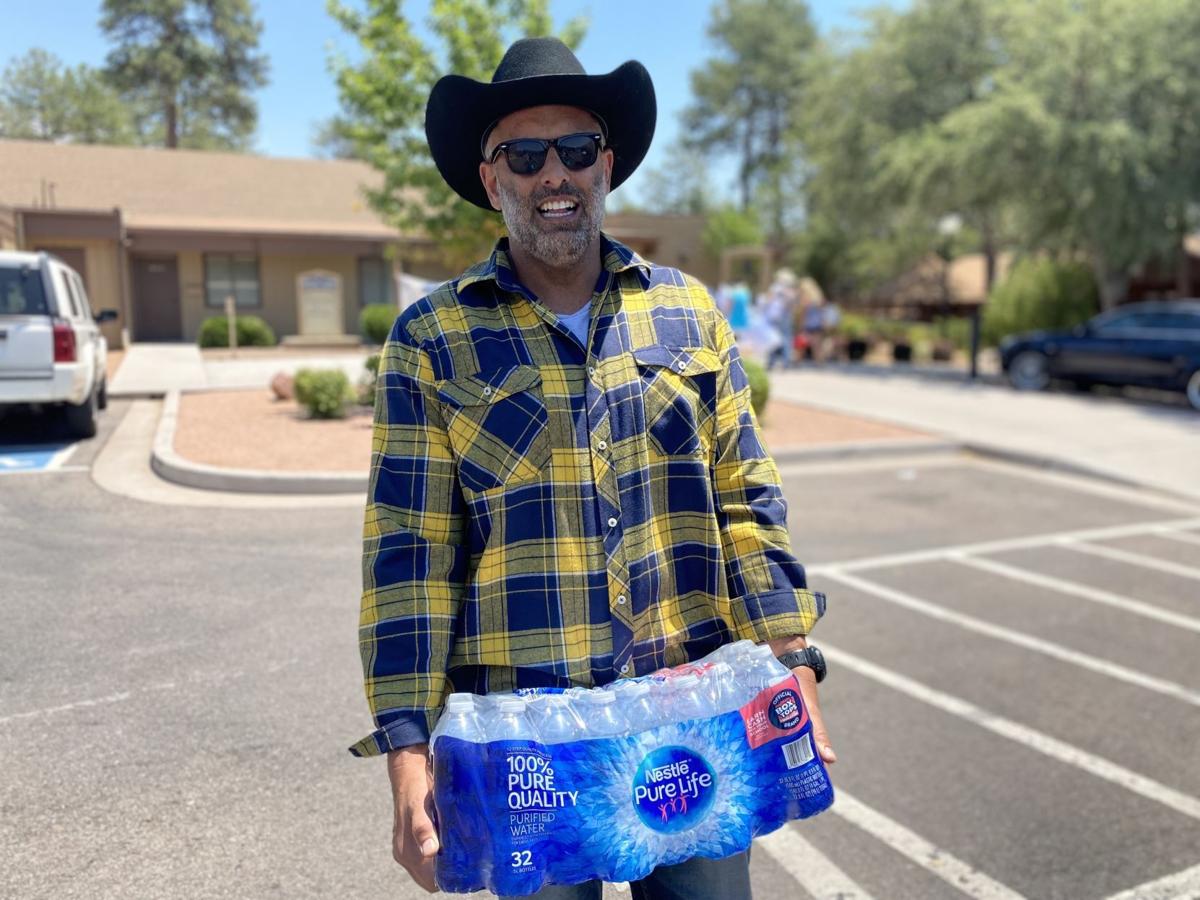 Bryan Masche organized a group of friends that formed a 13-vehicle convoy of goods for firefighters and evacuees. 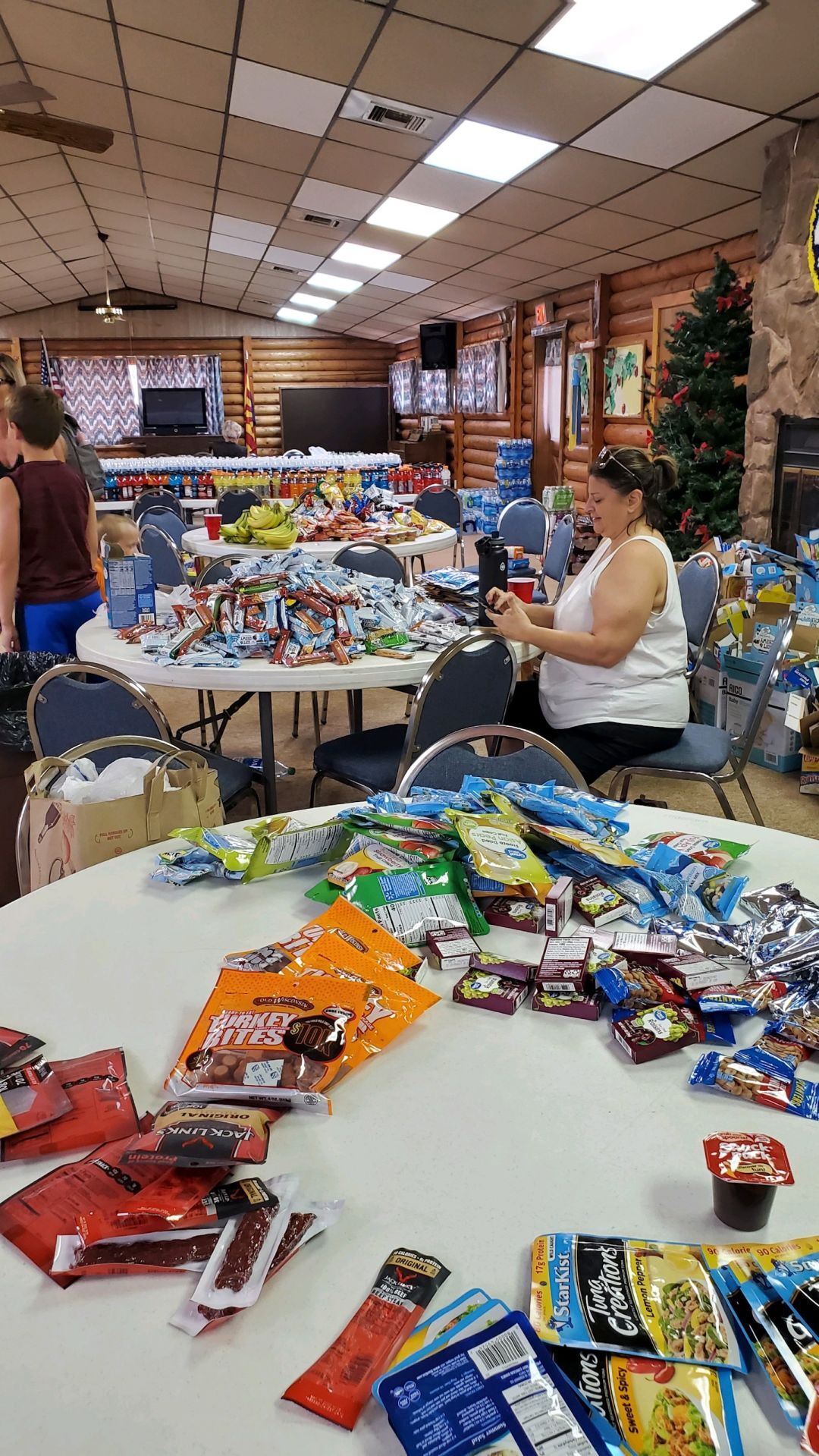 Tables chock full of donations from people in the Valley concerned about caring for those fighting or fleeing the Backbone Fire. 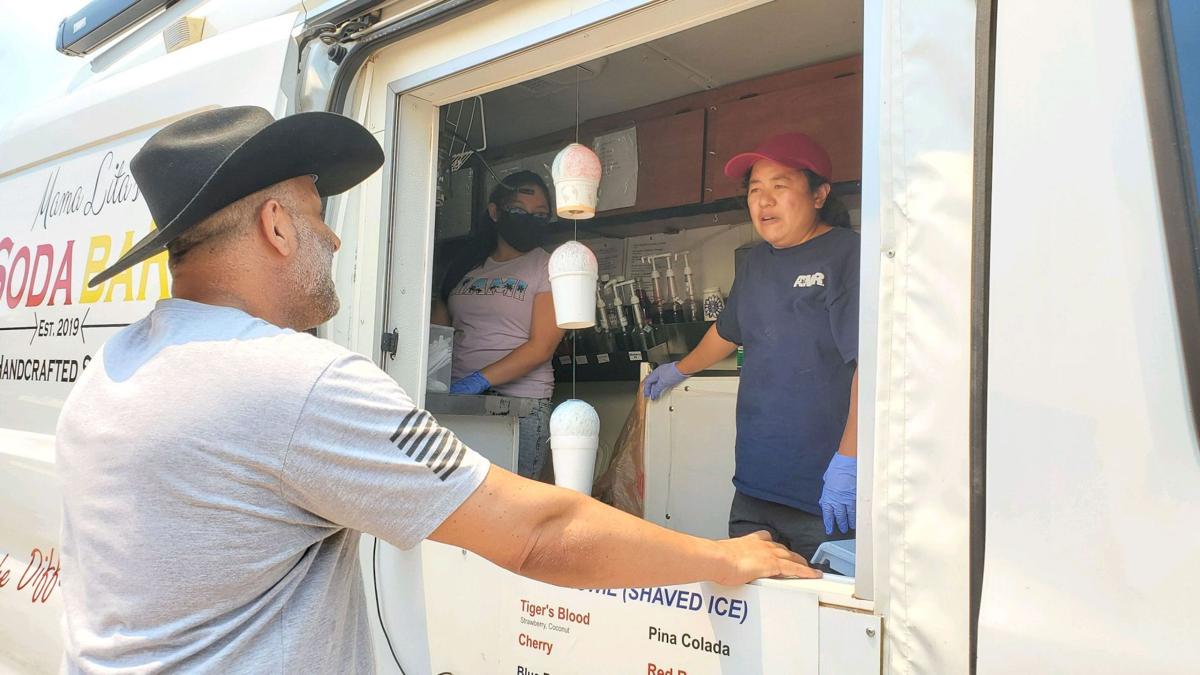 Joyce with her shaved ice. The food truck operator drove up from Mesa to serve shaved ice to anyone who wanted a cool treat.

A group of Valley residents rallied behind the Payson Homeless and Homeless Veterans Initiative to help Backbone firefighters and evacuees.

It all started when PHHVI board member Payson Mayor Tom Morrissey called on the organization to help those fighting and fleeing from the Backbone Fire.

PHHVI had the right facilities, with plenty of space and showers at the Mount Cross Lutheran Church.

They had a cadre of volunteers ready to help.

But they needed 60 pillows and blankets, water and food, even refrigerators.

The needs were so great, all of the stores in Payson couldn’t supply the volume of what PHHVI needed — and even if the stores had all the supplies, it would have taken thousands of dollars the organization just didn’t have.

Gwen Zorn, a PHHVI supporter and CEO of the Time Out Shelter turned to social media for help.

She didn’t have to wait long.

“When I saw the need, I called them,” said Bryan Masche, a friend of Zorn’s from the Valley.

He and Zorn knew each other well.

“Bryan and I did a leadership seminar together,” said Zorn.

“We spent 95 days together to challenge ourselves to go for our biggest goals ever,” said Masche.

One of the exercises required a scavenger hunt.

“We had to call on people to get things accomplished,” he said.

It wasn’t the first time Masche had experienced what a community can do.

He and his former wife had sextuplets 14 years ago. To help, their hometown of Havasu rallied to supply diapers and clothes, supplies and support. Even churches in Phoenix had diaper drives.

“There’s all these amazing people that care about their fellow man,” said Masche.

His Havasu experience gave him the courage to give PHHVI’s needs list a shot.

“I live life in a mode of gratitude. I have seen real miracles happen,” he said.

But when he received the “small and specific” needs list from Zorn, he stopped to say a prayer.

“I’m going to go to work trying to get a hold of this,” he told Zorn, but privately he thought, “We were trying to get this stuff and you don’t know if you can pull it off with no money.”

Like Zorn, he turned to his friends and groups on social media for help.

“I started doing videos (because) I just know, I have this base of supporters behind me,” he said.

Masche calls himself a sort of political organizer. He knows folks from the Proud Boys and other organizations. He also served in the Army as a military policeman.

“I organized convoys,” he said.

In his videos, Masche talked about the evacuees from Pine and Strawberry and that the American Red Cross needed help feeding and supporting them. He told his social media audience that PHHVI hoped to house 60 firefighters, but they had no bedding.

“I figured out how to do Facebook fundraising so started sharing the link,” he said.

He started at 3 p.m. on Saturday and quickly realized he’d be able to go up to Payson the next day with Zorn’s needs list filled.

As the day wore on, Masche and his friends bought out Costco stores around the Valley.

Then another problem arose, he and his girlfriend’s SUVs wouldn’t be able to hold all the donations.

“You don’t realize how big and heavy two pallets of water are,” he said, “I thought, I’m going to blow shocks out of my car.”

So, he sent out another request for folks to bring pickups.

“One of my friends from the Proud Boys came with a trailer,” he said.

Everyone loaded up the loot and made plans to come to Payson the next day.

“I told them, come to South Mountain Community College … around 10 a.m. ... and look for the lady waving the Arizona flag,” Masche said.

The next day, folks showed up with even more donations.

“My brain went into military mode,” he said.

Masche used to organize convoys during his tour in the Middle East. He quickly organized everyone in a line then had everyone drive together with their flashers on.

Soon he realized what he was doing.

But he trusted Zorn “not to put us in harm’s way.”

She was correct. So overjoyed was Masche when the convoy arrived in Payson, he popped open his sunroof and flew his huge Arizona flag.

“My friend then pulled out her flag and others did as well,” he said. “It was great.”

Zorn had tears in her eyes watching the 13 cars stuffed to the brink roll into the Mount Cross church parking lot on June 20.

Not only did Masche’s folks bring donations, but a woman named Joyce drove her shaved ice truck to Payson from Mesa “to give free ices to anyone who wanted them,” said Zorn.

The Pinon Cafe provided 60 sandwiches, salads and chips for lunches to the Red Cross to distribute to the evacuees.

Masche said he’s not done collecting donations. As firefighters continue their work to contain the Backbone Fire, he plans to come up again.

He’s continuing to ask for donations and telling the story of what’s been done so far.

“I make these videos and I start crying,” said Masche. “It’s because I am overwhelmed with how incredibly generous and loving people are. We hear all the time about my group versus your group, but we have so much more in common that connects us.”

The Proud Boys are a white supremacist organization that is so bad they're now deemed a terrorist organization in Canada. Why did you feel the need to omit that from your article and why did you take pictures of two of them wearing proud boy shirts? I'm sure you'll delete this comment too.