A fully refurbished 1963 VW Bug lies on its side after witnesses say a whirlwind or dust devil picked it up, turned it around and dumped it in the Walgreens parking lot Monday. 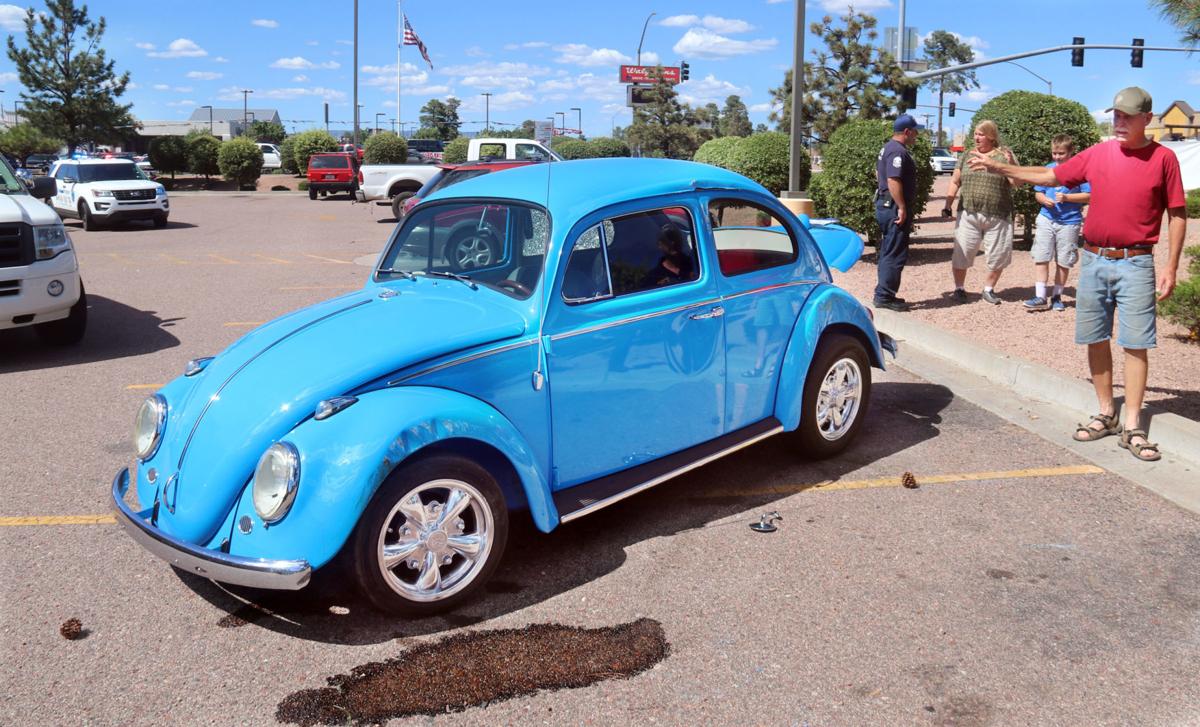 Brian Goble, in red shirt, gestures toward his VW Bug witnesses reported flipping in a whirlwind. Not even police believed wind could have flipped the car until talking to Shelly Alderman (behind Goble), who witnessed the event while waiting to make a left-hand turn.

A fully refurbished 1963 VW Bug lies on its side after witnesses say a whirlwind or dust devil picked it up, turned it around and dumped it in the Walgreens parking lot Monday.

Brian Goble, in red shirt, gestures toward his VW Bug witnesses reported flipping in a whirlwind. Not even police believed wind could have flipped the car until talking to Shelly Alderman (behind Goble), who witnessed the event while waiting to make a left-hand turn.

Shelly Alderman couldn’t believe her eyes — the wind picked up a bright blue Volkswagen Beetle or “Bug” in the Walgreens parking lot, turned it around and slammed it on its side.

“I was driving (on Highway 87) and going to make a left turn — it was like a sandstorm,” she said.

Her son thought it looked more like a tornado.

“I saw it whipping up, so I closed my window right before it hit,” he said.

Rocks and debris pelted his car as Stanton watched the Bug roll.

Tony Merriman, a warning coordination meteorologist from the Flagstaff office of the National Weather Service, said the event was either a dust devil “minus the dust” or a whirlwind.

Either term means “a small, rapidly rotating wind that is made visible by the dust, dirt or debris it picks up” according to the NWS website.

“These often occur on warm, sunny days when the low-levels of the atmosphere are unstable (meaning air rises) and there’s enough spin in the low-levels to organize a whirlwind,” said Merriman.

The owner of the fully restored 1963 Bug, Brian Goble, was not in the car at the time.

Instead, he heard an announcement over the intercom inside Walgreens.

“I was in the store getting photos done when I heard, ‘There’s a blue VW in the parking lot that has flipped.’ Instead of flipped, I heard slipped and thought, ‘How could it? I put on the parking brake and left it in gear,” said Goble.

When he got to the parking lot, neither he nor the police could believe wind had flipped the car.

“The first officer on scene told me, ‘No, that couldn’t happen, this is what must have happened,’” said Goble.

Alderman reported what she saw, and both men had to agree the accident was “an act of God,” said Goble.

As police and firefighters worked to right the vehicle — Goble says it weighs 1,630 pounds — he explained how much time and money he had put into the car.

The car originally came to Payson in 1966 with its second owner. Goble bought the car in 2014 and like most remodels found problem after problem after he opened up the car.

“I learned it had rolled in a crash,” he said. “When my buddy heard about the wind flipping it, he said, ‘That car likes to stay on its side.’”

Goble said only a tow company could get the car out of the parking lot, as he was unable to open the front door because a piece of the handle was broken.

Other damages included a blown out back window, bent tail pipes, damaged fender, cracked side window and lots of scratches.

Goble said he will refurbish the car.