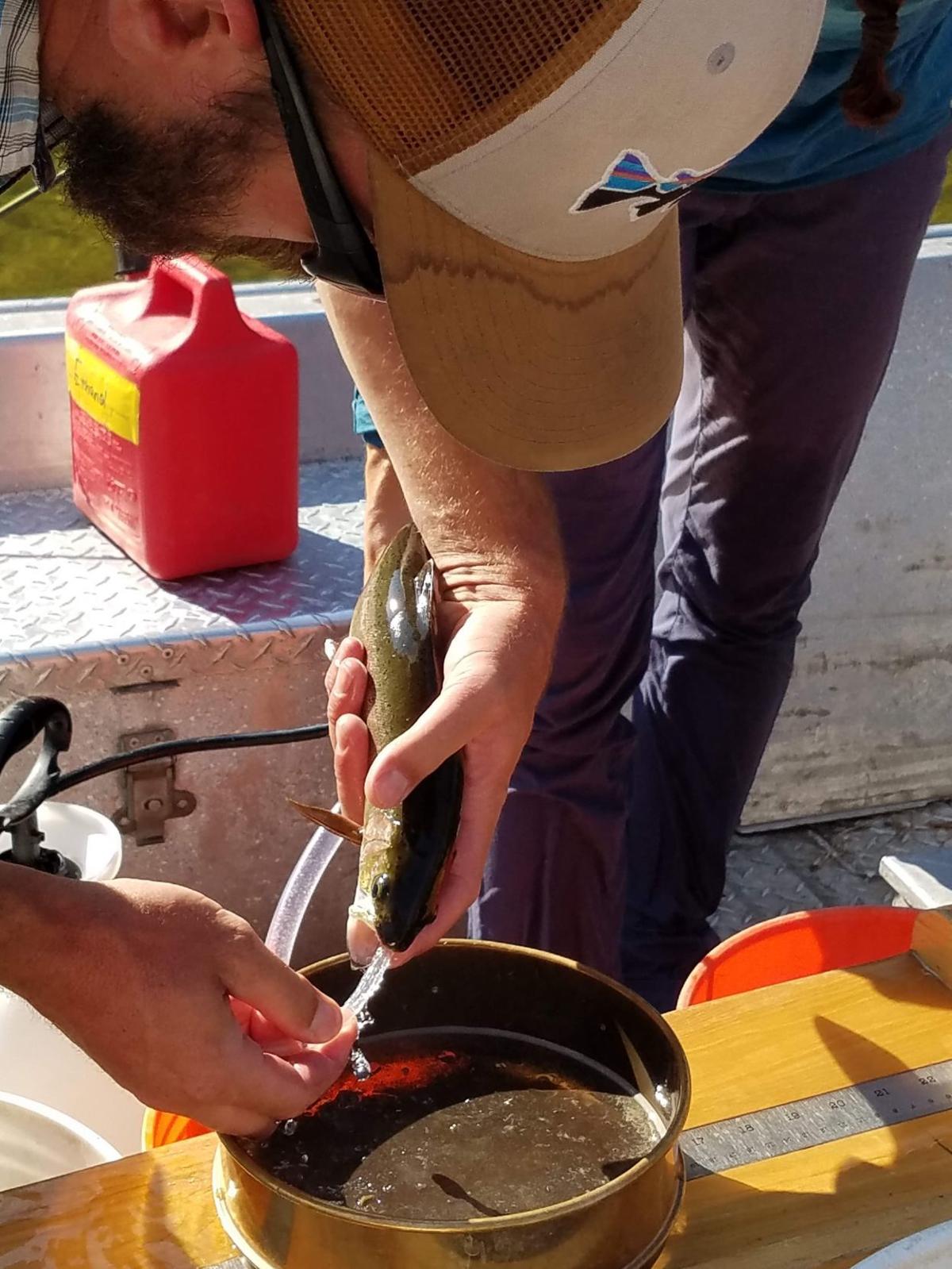 Dr. Ted Kennedy checking the stomach contents of a rainbow trout caught on the Colorado River above Lees Ferry as part of a bug flow experiment. 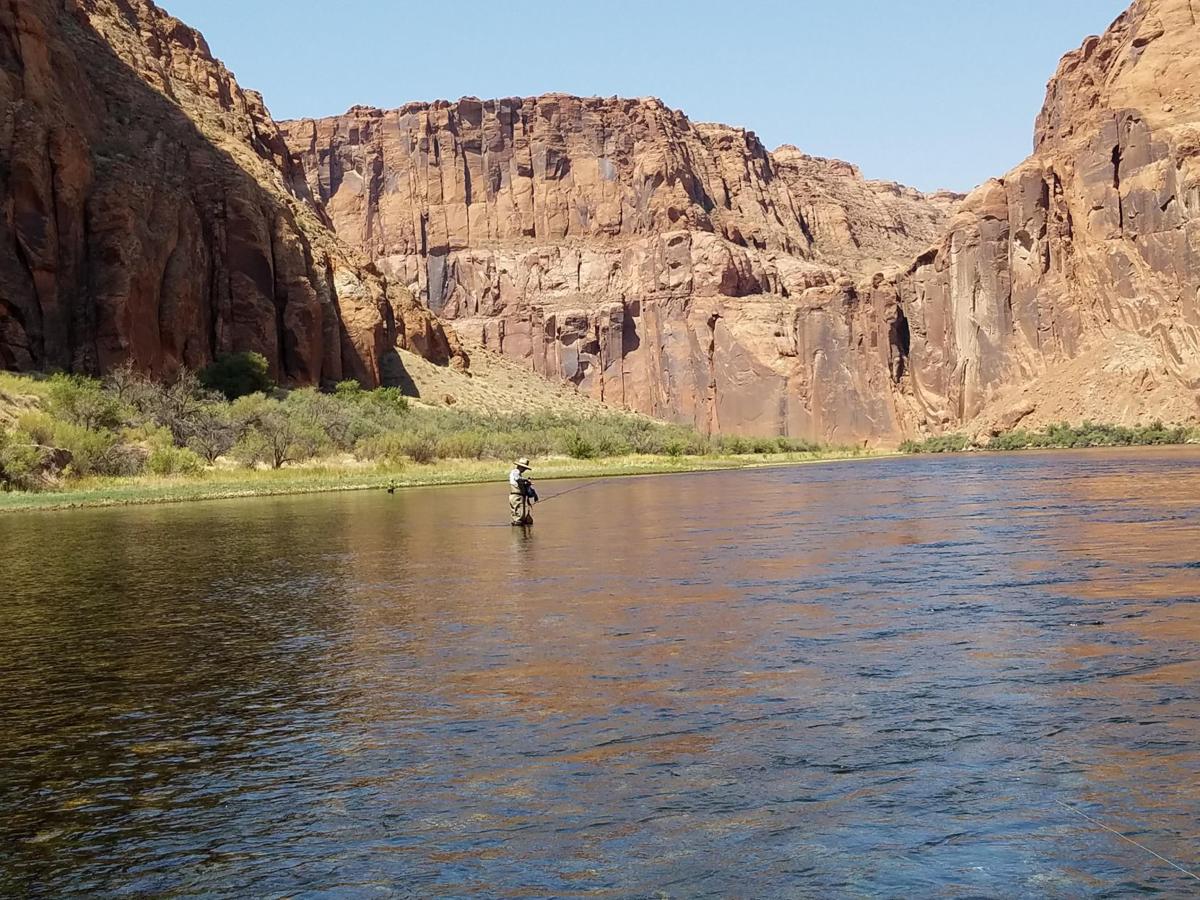 An angler fly fishing for trout above Lees Ferry.

Dr. Ted Kennedy checking the stomach contents of a rainbow trout caught on the Colorado River above Lees Ferry as part of a bug flow experiment.

An angler fly fishing for trout above Lees Ferry.

I love fish and fishing. I like trying to figure out how I can improve my fishing success based on what I learn about the fish I am fishing for.

Probably next on that list of things that I enjoy learning about would be insects, especially aquatic insects.

Can you imagine my excitement when I was offered an opportunity last August to fish for science to help answer questions about trout diet and fishing success on the Colorado River below Glen Canyon Dam?

The study is affectionately known as the bug flow experiment.

The primary purpose is to analyze the impact of providing desirable conditions for aquatic insect eggs (primarily midges) that allow them to remain wet until hatching versus the normal operation conditions where a portion of the laid eggs are left high and dry, and as a result do not produce young insects.

The normal condition below Glen Canyon Dam is for the river levels to fluctuate significantly based largely on the power needs of customers. These power needs often vary by season, weekend versus weekday, and even time of day.

From May through August of 2018, flows were leveled at a consistent low flow rate each weekend and then returned to higher flow levels during the week when the power demand was higher. This meant that the aquatic insect eggs that were laid remained wet and viable.

The preliminary results from these consistent weekend flows have been impressive in terms of aquatic insect production.

This translates to a better food base for the trout and native fish that depend on these bugs, as well as the birds and other creatures in the canyon that benefit from increased insect production.

Dr. Ted Kennedy and his team from Grand Canyon Monitoring and Research Center have been studying the aquatic food-base along the river corridor for years.

His team takes drift samples to measure the volume of aquatic insects in the river. They also examine rocks and other substrate to determine the estimated aquatic insect egg production for the river.

There is a tremendous citizen science component to the work as well.

River guides set out light traps to attract the adult insects at their campsites to provide data on the types and numbers of insect species that fly along the river corridor. These data sets provided a great baseline to compare findings during the bug flow experiment.

The primary aquatic insect type in the river are midges, which are very tiny, yet incredibly numerous.

The preliminary results of the bug flow study has demonstrated a very positive impact on midge production as a result of the controlled lower flows on the weekends. This was evident in the observed increase in the numbers of egg masses laid, the increase in the aquatic drift samples and increased numbers of adults in the citizen science insect traps from river trips.

Lower river levels on the weekends also provides great fishing opportunities for anglers. It is easier to access more productive sections of the river under lower flows.

The Lees Ferry Blue Ribbon Rainbow Trout Fishery provides an economic benefit to the local community, the region and the state. If weekend bug flows benefit this fishery as well as the native fish downstream, it would be important to learn and perhaps warrant continued similar flow regimes.

This is where my fishing opportunity came into play.

A subset of the study was to note the impact on fishing success, and trout diet on fish caught by angling during weekend versus weekday flow conditions.

I am a member of the technical work group, which is a subcommittee of the Glen Canyon Dam Adaptive Management Program.

As a member of that group, we provide input on monitoring and research activities that are designed to provide greater understanding about the Colorado River ecosystem below Glen Canyon Dam.

Fly fishing members of the Adaptive Management Program were asked to participate in this aspect of the study.

Our task was to spend equal time fishing during the lower weekend flows as well as the higher weekday flows and catch trout that were then processed by the scientists stationed near our fishing locations.

The fish we caught were briefly anesthetized to allow for weights and lengths to be taken, as well as an opportunity to study their stomach contents before they were revived, assessed and then quickly returned to the river.

The preliminary findings from the 2018 study appear to have yielded several benefits to bug production and an increased food base for the fish, with no negative impacts on the power production of the dam.

Weekend stomach content samples showed an increase in the number of midges (all life stages) in trout stomachs. The lower flows on the weekend also seemed to provide a bonus of food for fish when the flows returned on the weekdays. Gammarus, a much larger invertebrate than the midges, is prolific in certain sections of the river living on aquatic plants. When the river level was lowered, many of these Gammarus died, but when the water level returned to the higher flow conditions, many of these dead Gammarus were washed downstream and became an easily obtainable food source for the fish.

The river below Glen Canyon Dam would seem ideal for mayflies, stoneflies and caddisflies, which are extremely important food sources for trout and other fish in many streams and rivers across the country; but in the mainstream of the Colorado River are largely missing.

The bug flow experiment resulted in an increase in certain types of caddisflies.

My hope would be that multiple years of consistent bug flow regimes would foster more mayflies, caddisflies and stoneflies that require consistent flows of cold, clean water. They are found in many of the tributaries below Glen Canyon Dam and would be a great additional food source for the trout and native fish in the river.

The study continues this summer and I hope will be able to continue for several years to come because there appears to be a potential long-term benefit to the river system.

And if I am needed to fish again this summer, I am always happy to do my part to help science.

Jim Strogen is a Roundup columnist who writes about fly fishing in Rim Country and northern Arizona. He has a master’s in fisheries biology and a doctorate in elementary education. He has been fishing for 60-plus years. He retired after 33 years in public education and now hosts an after-school fly fishers program with JRE and RCMS students.