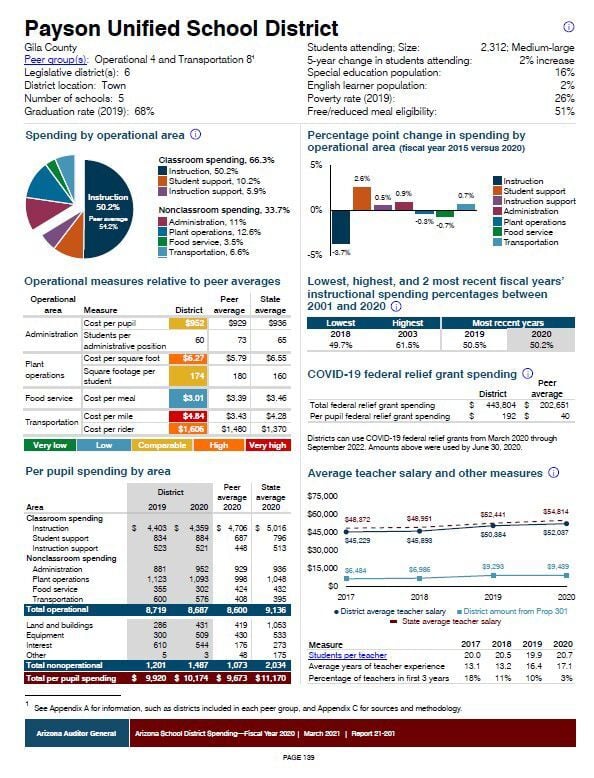 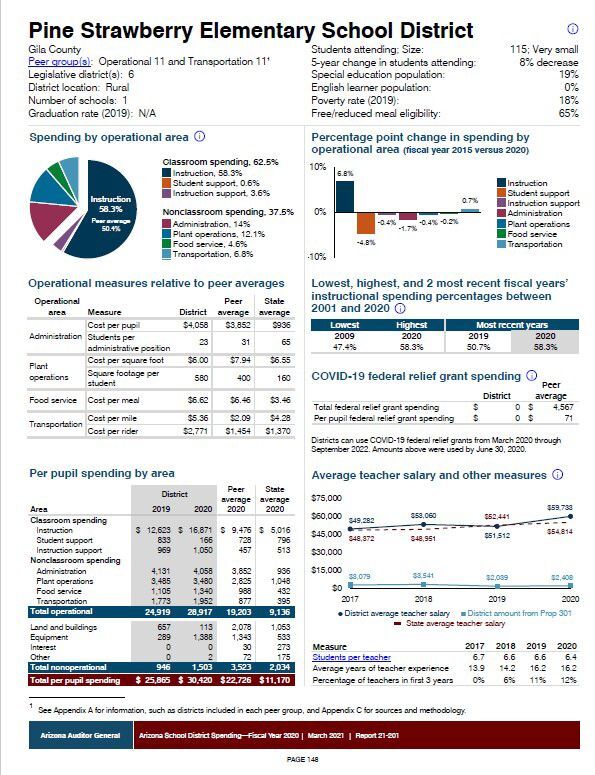 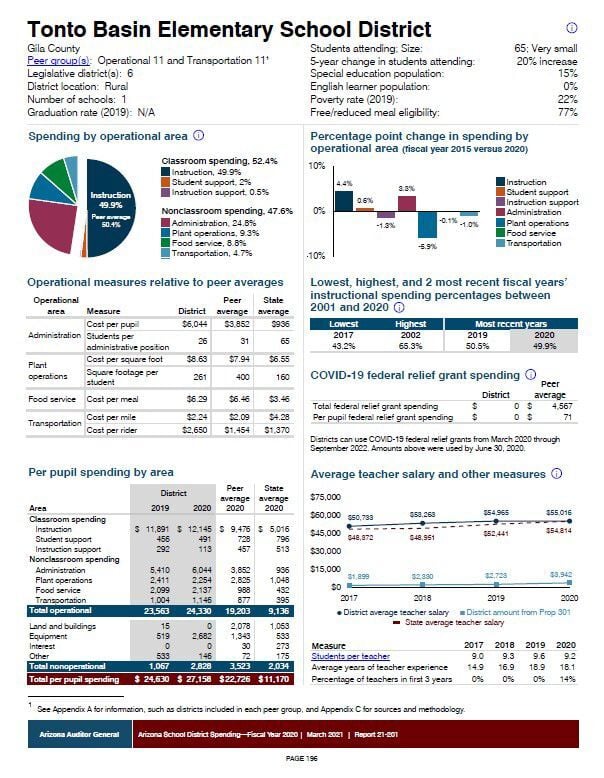 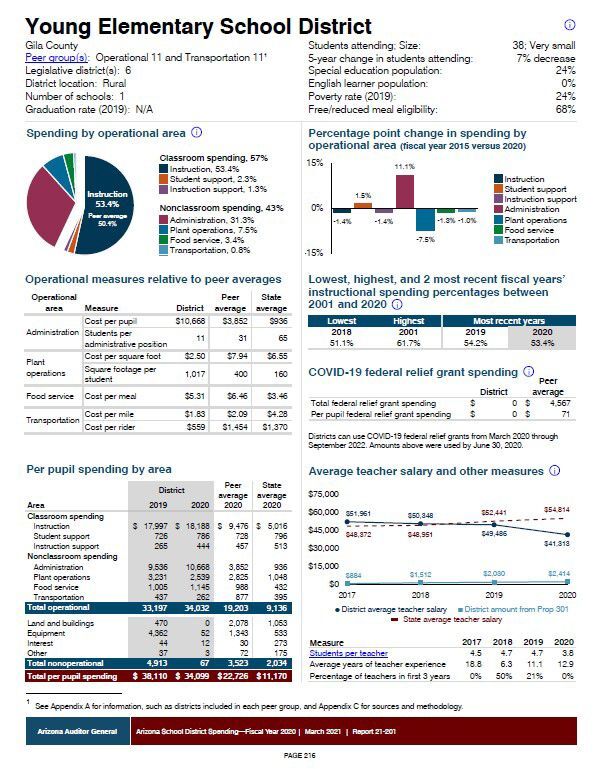 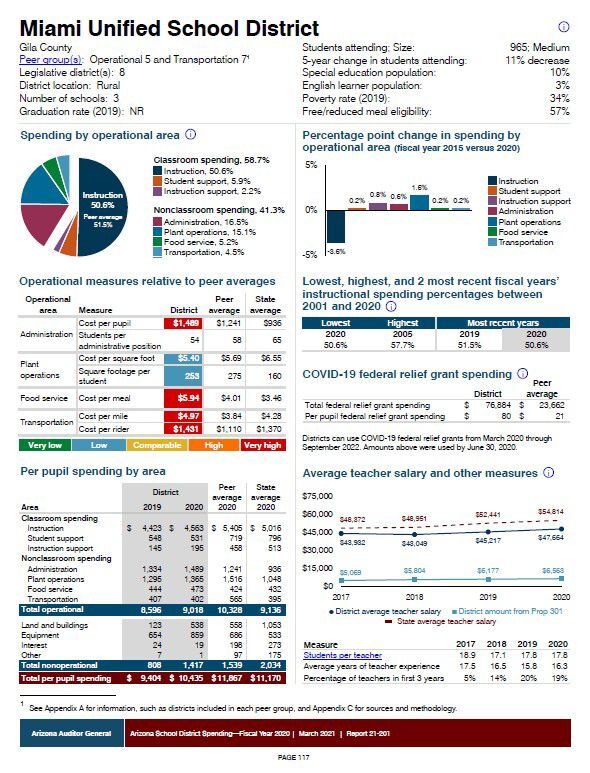 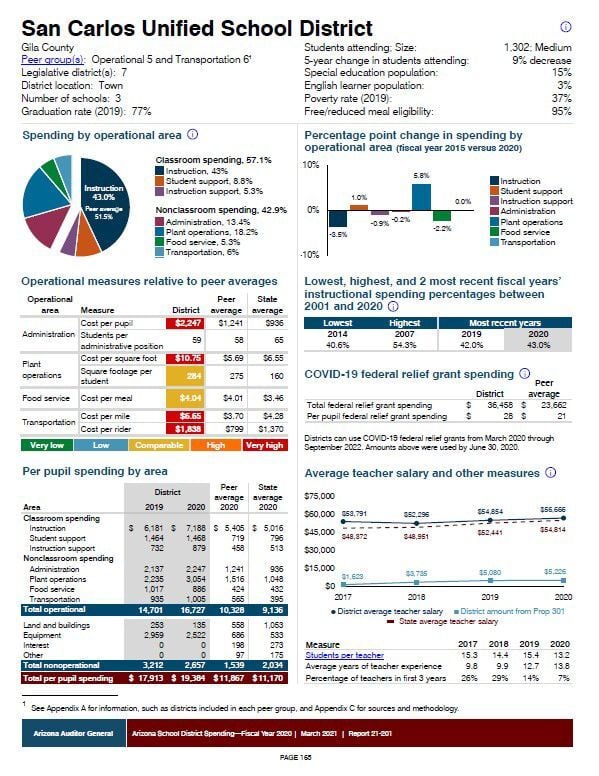 Payson schools spend about 13% less per student than the state average, according to the latest annual review of school spending patterns by the Arizona Auditor General’s Office.

The figures reflect the struggles faced by small, rural school districts — especially those with 100 or fewer students — when it comes to providing the buildings, services, administration and diversity of classes on a per-student cost basis. Fortunately, the state’s small-schools formula funding gives them far more money to operate on a per-student basis — a financial windfall for districts with less than about 150 students.

The auditor general’s report remains focused on trying to compare districts’ “instructional” costs with “operational costs,” to prod districts to spend more money on “classroom spending” than on “non-classroom spending.” Districts have long disputed the formulas, saying that things like administration, plant operations, food service and transportation are all essential supports for classroom spending.

For 2019, the auditor general categorized 69% as “classroom spending” out of the roughly $10 billion spent by 1,377 schools with 894,000 students in 236 districts. Over the past five years, the number of students in Arizona’s public schools has declined by 2%, despite a rise in the state’s population. Enrollment this year dropped by more than 50,000, although the pandemic probably played a large role in that decline. One big missing element in this year’s report were figures on how student test scores compared from district to district — since schools didn’t administer standardized tests in the spring or consistently in the fall. Many of the figures are also already out of date, given the big enrollment declines for the fall semester.

The report acknowledged the difficulty of comparing this year’s spending patterns to last year considering the impact of the enforced shift to distance learning during the pandemic. A massive infusion of federal money from the federal CARES Act and other shifts created a unique year for school spending patterns.

Nonetheless, the report provides lots of interesting comparisons between districts — especially how each district compared to similar schools in terms of enrollment and setting.

The report noted that Payson had an enrollment of 2,300, an increase of 2% over the past five years. But the pandemic enrollment losses have wiped out that gain — pushing enrollment below 2,000.

Payson’s teacher salaries have risen modestly since 2019, rising from about $45,000 to $52,000 — a 15% increase thanks to a sustained effort by the state to raise teacher salaries. Payson teacher salaries remain about 5% below the statewide average — although teachers here have a lot more experience.

There are approximately 20 students per teacher in Payson, which is about 10% higher than the state average and virtually unchanged since 2017. By comparison, Pine has about six students per teacher. The teacher-per-student average doesn’t reflect the average actual class sizes, since not all people with teaching credentials teach full time — including jobs like Payson’s student achievement teachers. The average also includes special education teachers, who often have very small classes depending on the disabilities of the students. Payson’s elementary school classes generally have 25 to 28 students and the high school classes generally have 28 to 34 students. At least, they did before the pandemic produced a 10%-15% decline in enrollment, with another 10%-15% remaining in online-only classes.

Payson’s spending pattern was high in transportation and plant operations and low when it comes to the cost of meals.

So here’s how school districts stack up for key measurements in the latest state auditor general report. To see the full report on each district, go look at the links to this story in our online publication at payson.com.

Once again, shoddy, inaccurate, misleading cheerleading from the education industry spokesperson. The state average for student spending is 11,170 while the PUSD number is 10,174.which is a 8.9% difference. Simple third grade math.

Another significant factor in the difference is the district costs for building and lands. Factoring out Food Service costs, the total operational difference is approx. 3%.

The major consideration should be how PUSD compares to it's peer schools, and PUSD spending is nearly 5% ABOVE the peer average and their student achievement results are pitiful in comparison. 32% of PUSD students fail to graduate while peer schoolx fall into the 85 - 94% rate.

PUSD has one of the worst records for student achievement for non-reservation schools in the state - - and is getting worse.

It is time for the Roundup writers to stop regurgitating the misleading and self indulgent school propaganda and for the citizens to hold the district accountable for their pitiful failure to meed the needs of Payson families.