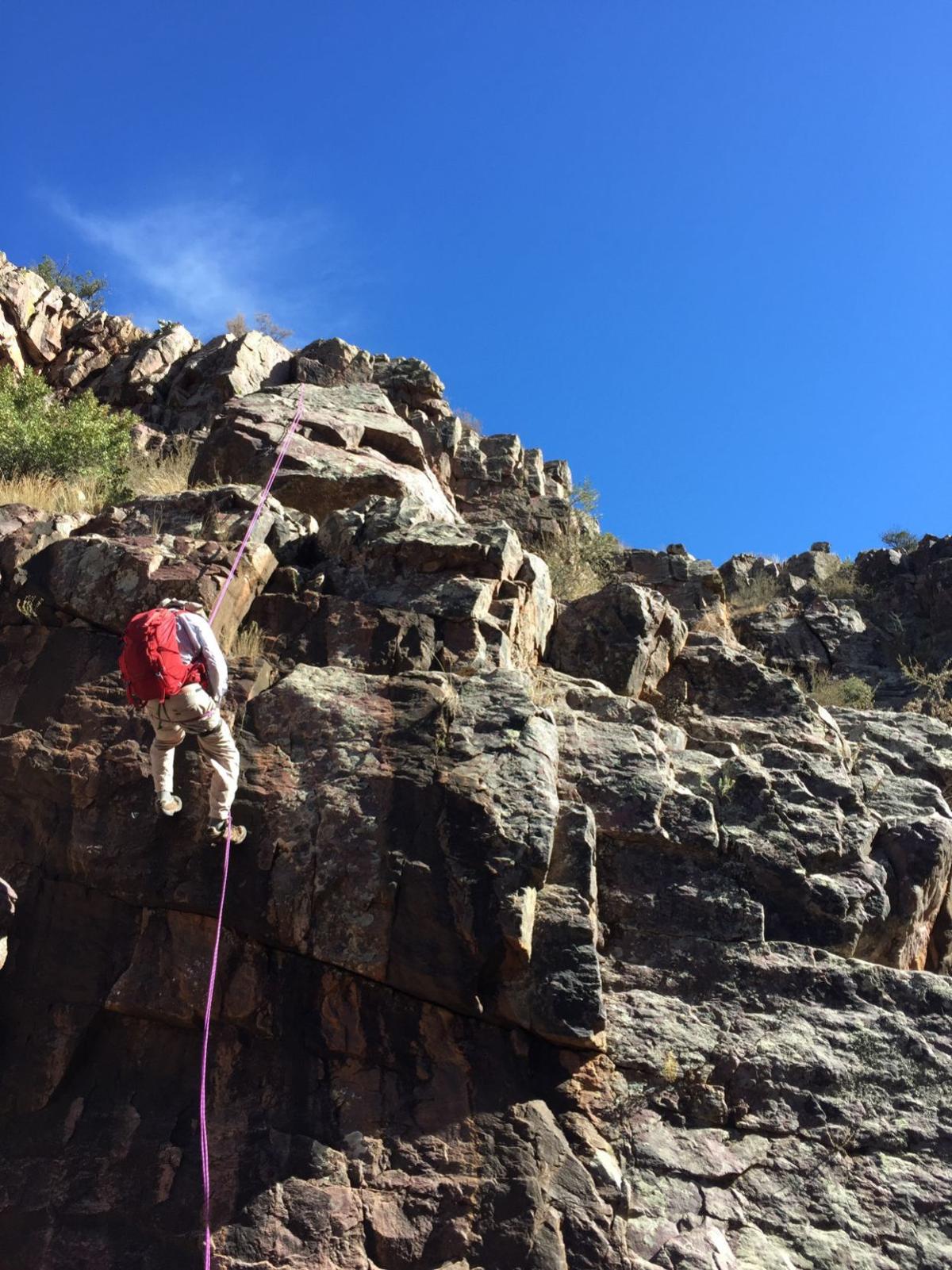 Joe Schmidt rappels down a rock in Box Canyon on a fishing adventure. 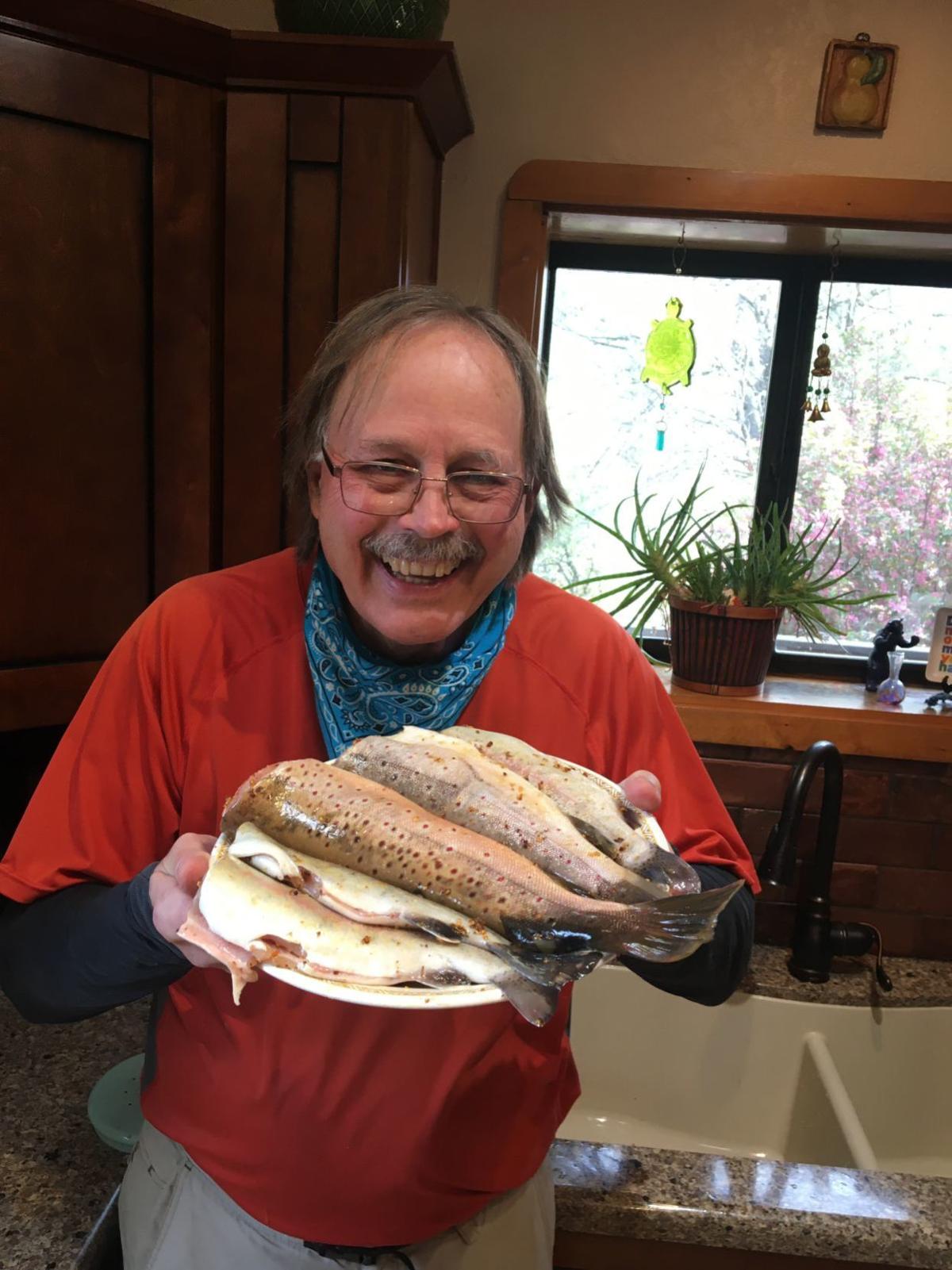 Joe Schmidt loves to fish and he’ll have plenty of time to do more of it now that he’s retiring as a teacher. 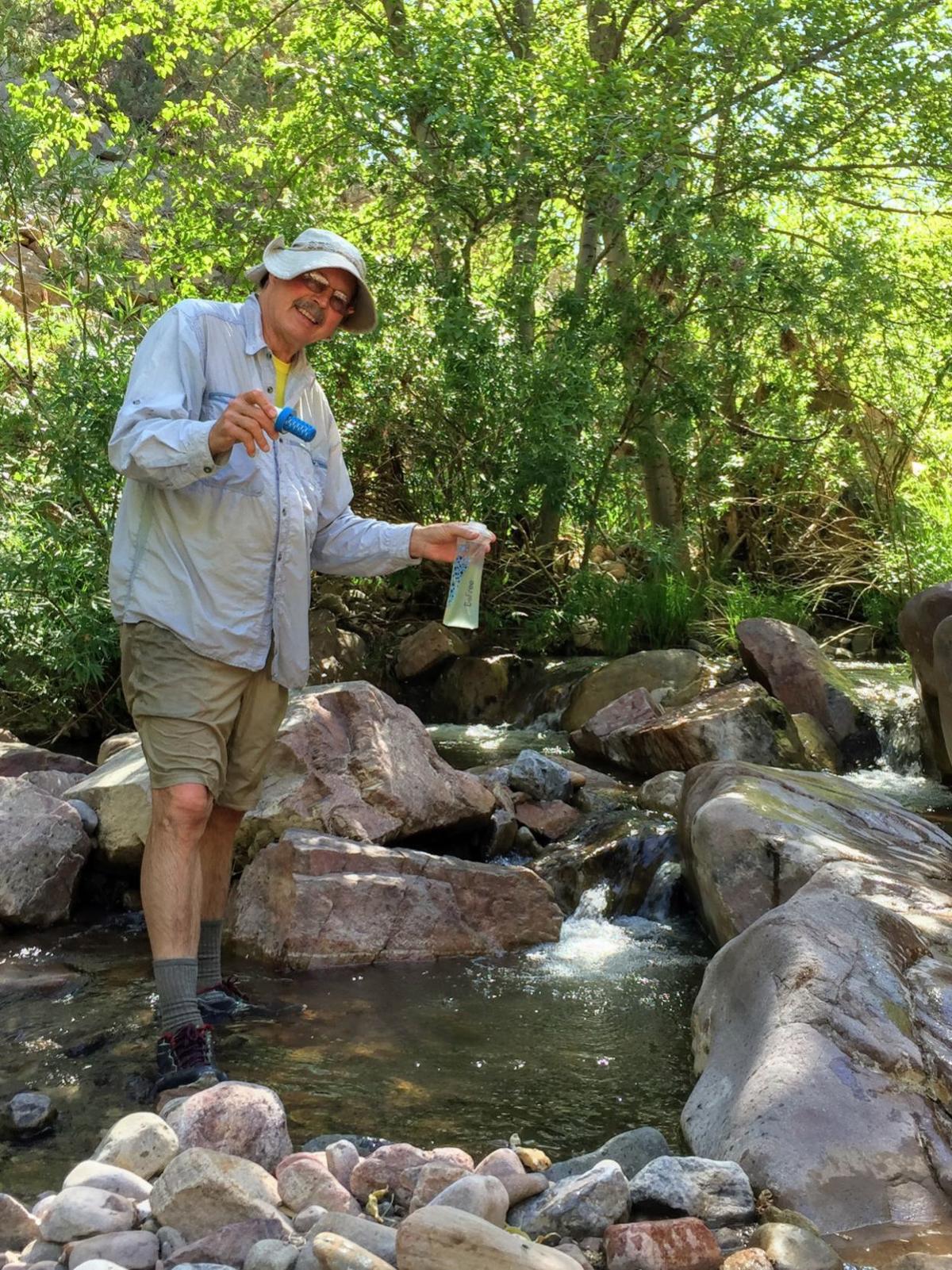 Joe Schmidt on one of his many outdoor adventures. 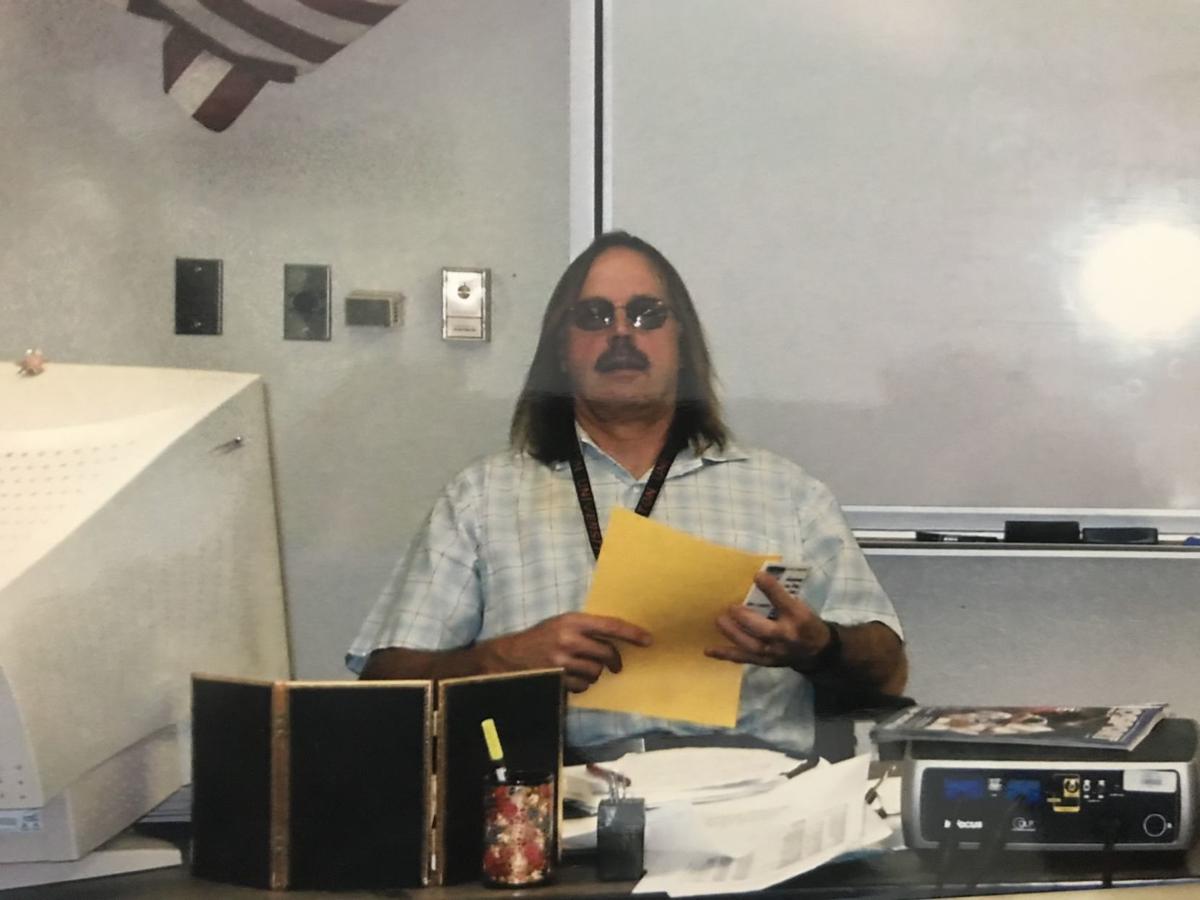 Joe Schmidt stopped getting haircuts in protest of the administration making coaches raise money for T-shirts and used the money he saved at the barber shop for the team.

Joe Schmidt rappels down a rock in Box Canyon on a fishing adventure.

Joe Schmidt loves to fish and he’ll have plenty of time to do more of it now that he’s retiring as a teacher.

Joe Schmidt on one of his many outdoor adventures.

Joe Schmidt stopped getting haircuts in protest of the administration making coaches raise money for T-shirts and used the money he saved at the barber shop for the team.

Joe Schmidt changed lives for the better during his three decades in education.

On Friday, Schmidt hung up his lab coat in his biology classroom at Payson High School for the last time.

Fellow teachers say he will be missed.

Payson High physics teacher Andrew Fiala recalled how Schmidt took him under his wing when he arrived at PHS as a 22-year-old Chicago native fresh out of college.

“During my first semester here I met very few people my age and with an education,” Fiala wrote in a tribute. “I found it hard to find friends and Joe took me out for a hike.

“I didn’t know it, but hikes with Joe are not a run-of-the-mill sort of jaunt. Joe took me to one of the most beautiful places I have ever been, Box Canyon. Here, Joe taught me how to fish the river and taught me about the edible plants. Above all, Joe became my friend.”

Fiala learned over the ensuing years that hiking with Schmidt requires a sense of adventure.

“He has introduced me to places that have left me in awe, but they typically require some serious riff-raff filters along the way,” he said. “Sometimes the riff-raff filters worked me over pretty good, and I would look over to Joe and see him grinning from ear to ear, loving every moment of the adventure.

“Joe, you have helped thousands of Payson kids through the years, and at least one lucky kid from Chicago. I am eternally grateful.”

Fiala is just one of many fellow teachers and former students with fond memories of Schmidt.

Schmidt is retiring after 30 years in the classroom. He taught seventh and eighth graders at Tonto Basin School for five years, seventh grade science at Rim Country Middle School for 10 years, and spent the last 15 years at PHS.

Schmidt said he’ll miss a lot of aspects of teaching. But one thing stands out.

“I think what I’ll miss most is when some process makes sense for a kid and you can practically see the light bulb go on,” he said.

A former student, now a nurse, noticed Schmidt in the grocery store recently and approached him.

“She said learning about microbiology and growing bacteria and other things we did in class were the most valuable things she learned towards her nursing career,” Schmidt said.

“One of the things that’s really satisfying is to have a former student come back and tell me something I said or that we did they found really valuable later on. At the time you never know if they value it because they’re teenagers and they aren’t going to let you know.”

She’s one of many former students to go on to careers in the medical field, including at least a dozen doctors.

His last school year didn’t end the way he hoped it would.

The COVID-19 pandemic that closed schools and separated students and teachers proved difficult for everyone.

“It’s the weirdest end to a year I’ve experienced,” Schmidt said. “We left for spring break and I never saw them again. It kind of trickled out instead of really ending. I missed having closure with students.”

He said the online classes he conducted were necessary but a poor substitute for in-person teaching.

“Zoology and anatomy (are the last subjects) we do in a year, so we missed all our dissections,” he said. “We dissect everything from crayfish, pigs, sharks, squid, sheep brains and cow eyes. Some of them have to work through preconceptions. It’s a hands-on (experience) and they relate it to human anatomy. If they’re going to turn out to be doctors, you want them to see the real thing.”

Schmidt was born in Los Angeles in 1952. His family moved to Ohio then to New York City before relocating to Phoenix when he was 7. He ran cross country, wrestled and competed on the track and field team at Alhambra High, where he graduated in 1970. He won the Phoenix Championship in discus his senior year.

He enrolled at Northern Arizona University on a track scholarship but got injured and transferred to Arizona State University, where he graduated in 1975 with a Bachelor of Science in biology.

He wasn’t sure what he would do for a career.

“There was not much of a plan,” he said. “I liked nature. My idea was I would be like a Park Service ranger or something. But the Park Service wasn’t hiring. I took a temporary job for a chemical manufacturer. I ended up working for the Forest Service on fire crews. The first year was 1977 I was on the Globe Hotshots and in 1978 I came to Payson. So that’s how I moved up here.

“As a freshman in high school I came up here in summers to work at Camp Geronimo and Payson’s a much nicer place to be than Globe, so my second year with the Forest Service I had enough seniority to come to Payson.”

Schmidt worked as a mountain climbing guide across the western U.S. in the mid and late 1970s.

“I had been a backpacker, and I went to work while going to college for a store in Phoenix called High Adventure Headquarters and realized I loved it,” he said. “That was like 1973 and for about seven or eight years into the early 1980s. I was guiding climbers so I could go climbing. The idea was to spend as much time in the mountains as possible.”

That’s when he met Penny Navis, who moved to Payson right out of grad school after earning her master’s degree in social work.

“We fell in love on a cross country skiing trip and have been together since,” she said. “Joe was working as an artist sculptor and firefighter and botanist/gardener,” she said. “He is truly a renaissance man. He built the house we still live in and has created a magical treehouse in a lush flower and vegetable garden on a granite rock. We are avid gardeners and love canning and processing the bounty of our garden.”

“I had lots of experience working with kids, but no outdoor experience at all,” she said. “I was hired as the therapist for an experiential outdoor ed prevention program. Joe was the missing outdoor ed piece for the program. Our shared passion for our mountains, rivers and the adventure they offer are as a result of our time together in Challenge Discovery.”

He and Penny recently celebrated their 38th wedding anniversary. They have two children, Sara and Lucas. Both were scholar athletes.

Sara graduated from PHS in 2000. She competed on the Longhorns track team and won the 110-meter hurdles state championship as a senior. She completed her BS at the University of Arizona then a double master’s in social work and public health from the University of Michigan. She works for Amnesty International as a national youth program manager in Oakland, Calf.

Lucas, a 2003 PHS graduate, helped the Longhorns win their only boys soccer state title when they tied Sedona Red Rock 0-0 in the 2002 championship game and shared the crown. He completed his BA at Southern Oregon University and lives in Redmond, Ore. Working for Aeroteck as a contractor doing IT quality control testing for Stryker, a medical devices company.

“They both share our love for human rights, critical thinking, art and the great outdoors,” Penny said.

Schmidt coached basketball while at Tonto Basin School. He continued coaching when he began working for Payson schools. One year, while working at RCMS, he coached six basketball teams, including those for the school and parks and recreation.

He coached girls soccer with assistants Grant Kepp and Kendrick Francis at Payson High from 2006 to 2010. The Longhorns qualified for the state tournament each of those seasons.

A coach, athlete and official

Schmidt began playing soccer in his mid-30s in a Scottsdale Parks and Rec league and fell in love with the game. He played competitive soccer until he was 62.

“I like the idea of the game,” he said. “My elbows hurt when I played basketball and my kids were playing, so I made the transition to playing soccer and then I started coaching their teams.”

He’s been an Arizona Interscholastic Association soccer official for 24 years with no plans to stop.

“I get to watch good games, promote good sportsmanship and kind of teach as I go,” he said.

He may not be ready to stop officiating, but he’s glad to get out of the classroom and have time to do other things.

“I’m ready to retire,” Schmidt said. “I have a couple of years of honey-do list house projects because teaching takes about 60 hours a week.

“My wife and I are probably going to travel more. I love chasing wild trout in remote canyons and I’m expecting to do more of that.”