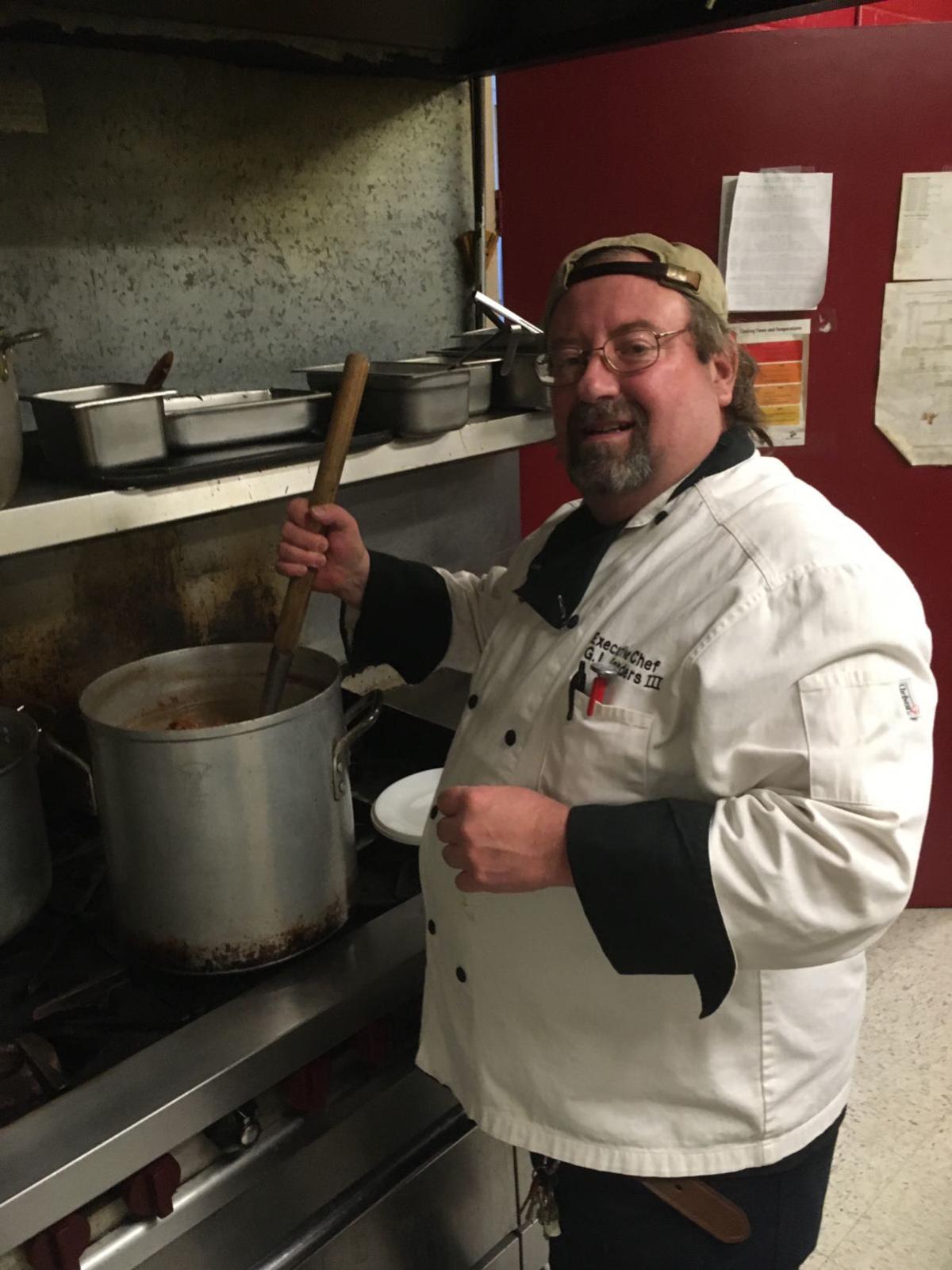 Executive chef George Sanders cooks up chili for a recent meal at the senior dining hall in Pine. 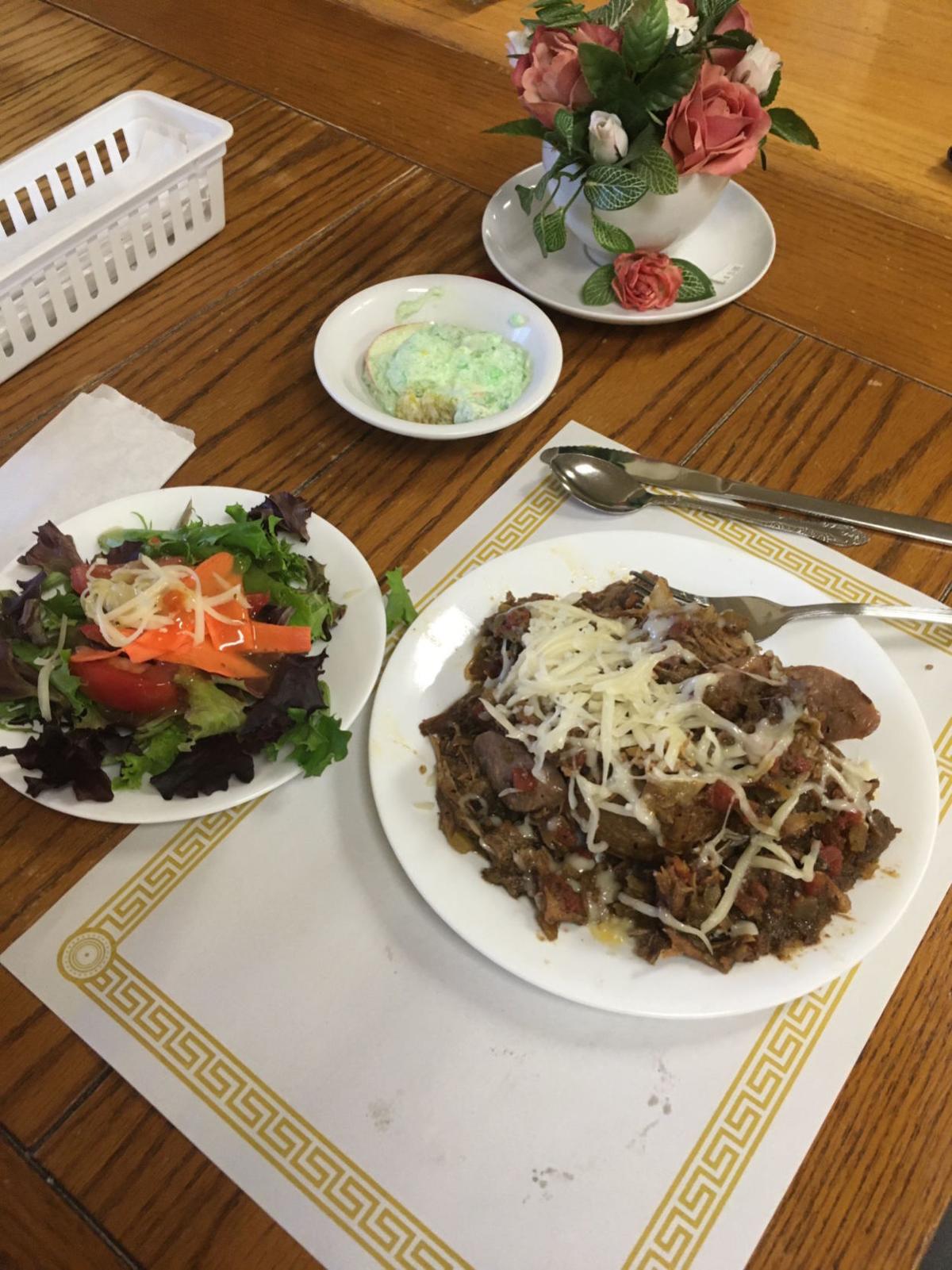 Baked potatoes stuffed with steak and sausage chili were on the menu recently at the Pine dining hall. For senior members, the meal cost $5.

Executive chef George Sanders cooks up chili for a recent meal at the senior dining hall in Pine.

Baked potatoes stuffed with steak and sausage chili were on the menu recently at the Pine dining hall. For senior members, the meal cost $5.

Pine-Strawberry residents who donate to and/or buy from the Pine-Strawberry Thrift Shop on Highway 87 and Randall Place in Pine support the Senior Citizens Affairs Foundation (SCAF).

“It’s not seniors having affairs,” joked Sheri Earp, president of the SCAF board.

But it is seniors enjoying gourmet food for $5 a meal.

I joined about 20 locals for lunch in the dining hall (behind the thrift shop) on Tuesday for chili stuffed baked potatoes, salad and dessert.

SCAF’s mission is to provide a hot meal for seniors that may be widowed, ill or just in need of conversation. In the summer, as many as 70 meals are served each day, five days a week, said George Sanders, executive chef. That includes up to a dozen dishes sent out via the Meals on Wheels program, providing a hot lunch to those housebound.

Sanders won’t cook the same thing twice for 20 days. How on earth does a tiny town like this get senior food service like this? They hire a five-star chef.

Earp and Lynne Coykendall, SCAF board secretary hired Sanders in July 2015 after a 15-minute interview. His resumé includes executive chef accreditation from the Culinary Institute of America (CIA) in New York, 40 years of experience including at several five-star restaurants.

“I went in on my days off to learn how to cook,” he said. “After about a month of that they brought me in officially to train.”

He later attended a culinary school in San Diego. He worked at Top of the Cove, a five-star in La Jolla, Calif. as well as six other restaurants throughout his career. He has also owned or co-owned three restaurants.

“I had retired three times,” Sanders said. “But I get bored.” He stopped in the senior center one day, thinking he would volunteer. He wasn’t needed at the time, but when the chef left, Earp called Sanders.

“I have never worked with so many loving, caring people in my life,” said Sanders, who describes himself as a temperamental chef.

“Hanging with the seniors has mellowed George,” said Coykendall.

I got a real life example.

During our lunch interview, Earp brought Greg DeWitt of Show Low who was trying to get to Sedona to see his father, who is in a coma because of late stage dementia. His car had broken down in Christopher Creek and on that rainy Tuesday he had been hitch-hiking and walking. He had been dropped off in Pine. Earp asked if anyone in the room was going to Sedona that day.

“I smelled the food and was hoping to get warm,” DeWitt said.

Sanders quickly said he would take him, but not before feeding him a meal. After lunch, Sanders drove him to Sedona.

Sanders greets guests by name, as friends. He asks about those who are homebound. He is part of the village.

When he started the patronage, however, there were less than a dozen people coming a day.

“The goal was to make the food better, raise the bar and get our name out there,” Sanders said. “Seniors are the most difficult crowd I’ve ever cooked for.”

Sanders remembers serving blackened salmon. A Meals on Wheels recipient got their lunch and called. “They thought I burnt the salmon on purpose,” he laughs.

Sanders convinced them it was cooked correctly and turns out they loved it.

On costs, Sanders is proud to explain each meals costs $2.30. He’s permitted $10 per meal as his budget.

SCAF is not federally or state funded. Every dime comes from the thrift shop and donations. The Payson Community Garden also donated about 2,000 pounds of fresh vegetables.

As well as a hot meal, Monday through Friday, the senior dining hall has exercise programs, card games, arts, and bingo.

Senior dining hall details: Membership is $10 per year. They invite anyone over 50 to join. (Yes, I joined.)

Open Monday through Friday at 11:30 a.m. for salad (soup on Monday, Wednesday, Friday).

Entrées served at 11:45 a.m. Menus available in the dining hall.

Meals are $5 for members $7 for non-members.

At 10 a.m. Saturday, Jan. 25, kids 5 years and up are invited to the library in Pine (in Randall place) for the Winter Lego Challenge. There will be prizes.

If I am missing an event, let me know by emailing myndibrogdon@msn.com.