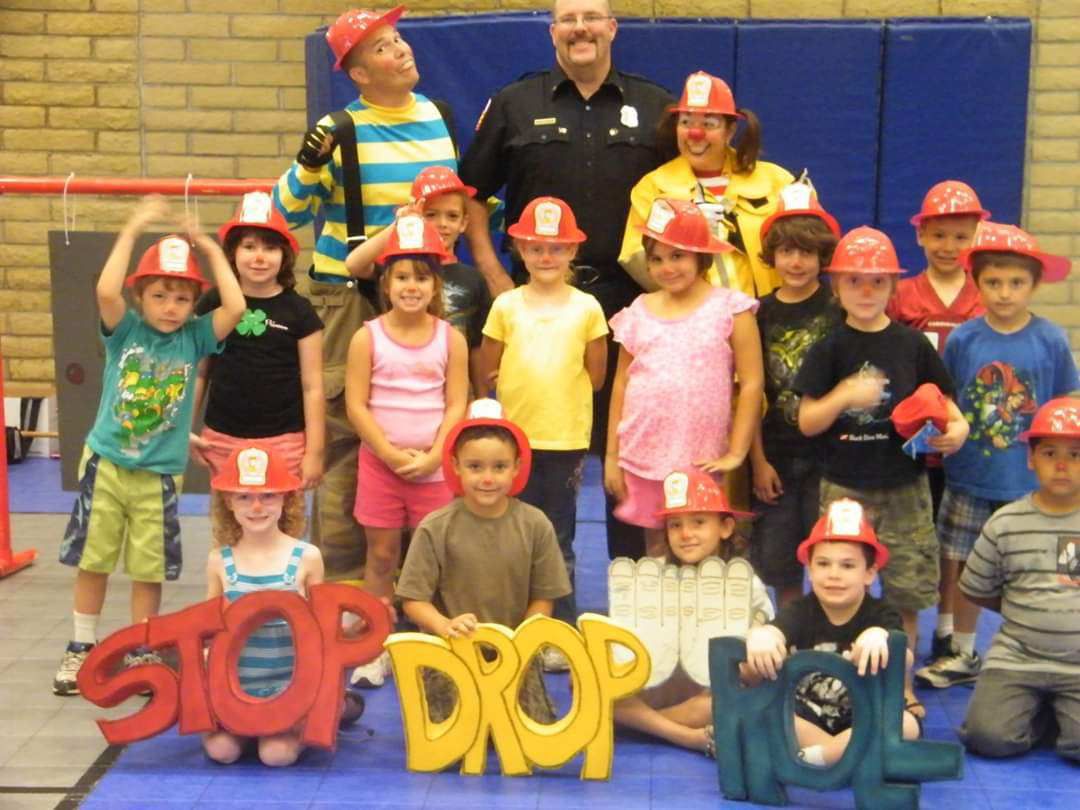 Learning to stop, drop, and roll with the kids at a Payson summer camp in the Rim Country Middle School Gym 13 years ago. Younger Flambé and Fizzle flank PSFD Firefighter Shane Johnson. The duo often recruits coworkers to assist in public education. 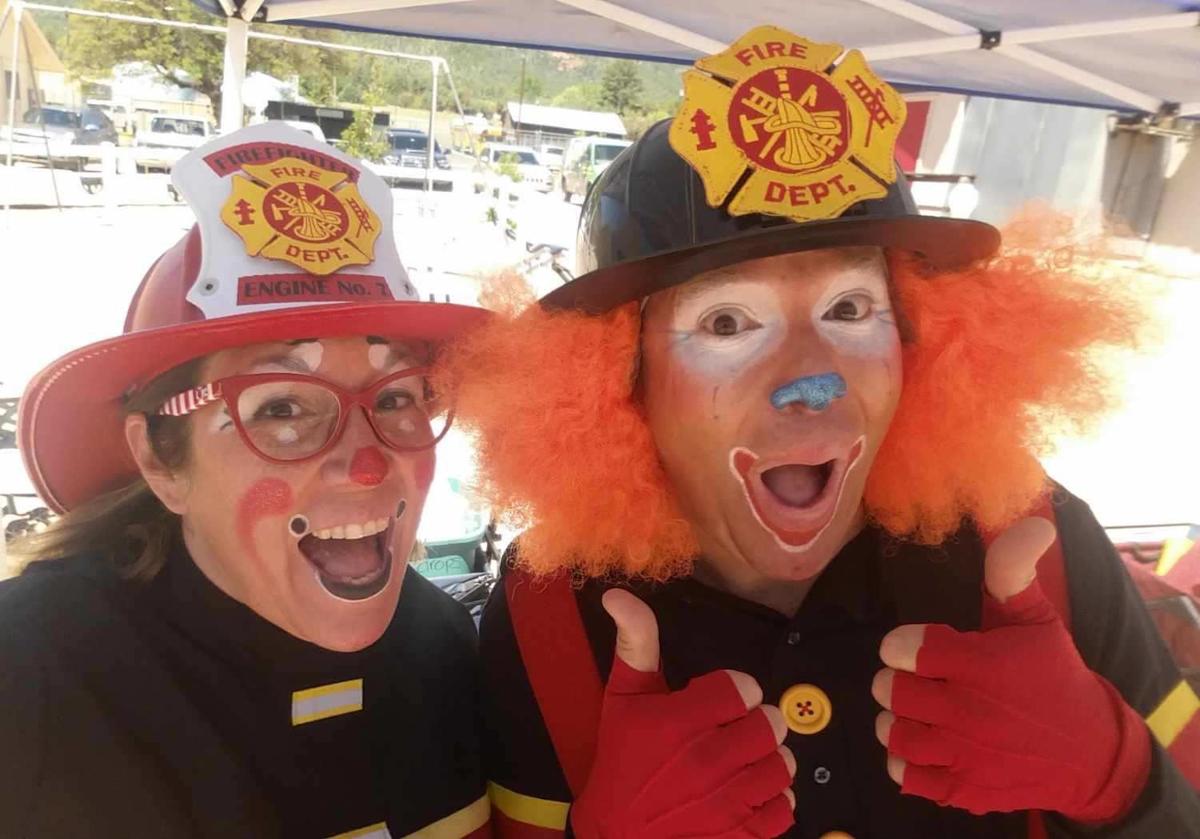 Fizzles and Flambé (aka Stacy and Kevin Figueroa) at the Pine-Strawberry Community Center hamming it up in the name of fire safety. 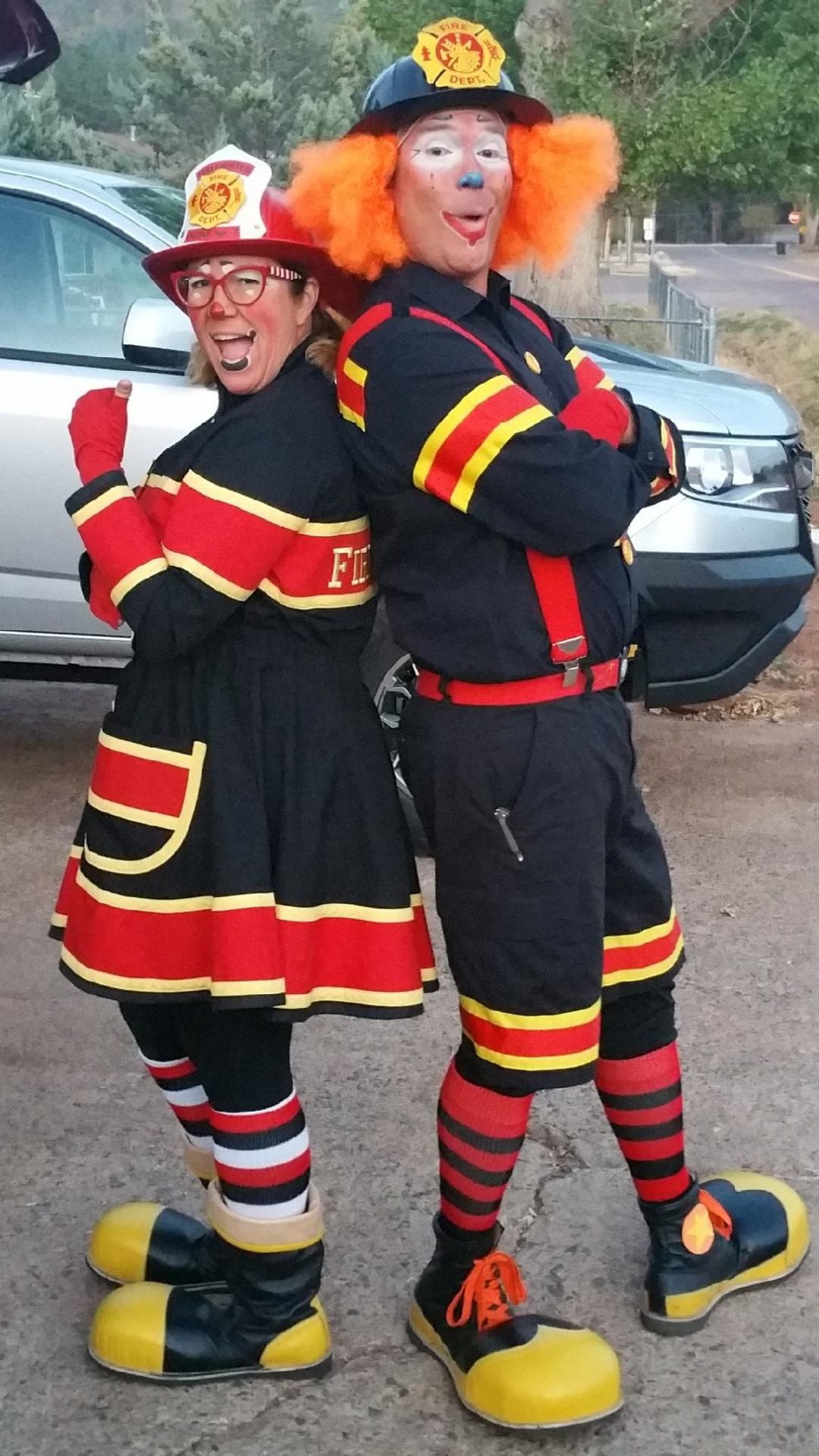 Brother and sister team Fizzles and Flambé all grown up and ready for the parade in Payson in 2019.

Learning to stop, drop, and roll with the kids at a Payson summer camp in the Rim Country Middle School Gym 13 years ago. Younger Flambé and Fizzle flank PSFD Firefighter Shane Johnson. The duo often recruits coworkers to assist in public education.

Fizzles and Flambé (aka Stacy and Kevin Figueroa) at the Pine-Strawberry Community Center hamming it up in the name of fire safety.

Brother and sister team Fizzles and Flambé all grown up and ready for the parade in Payson in 2019.

The siblings, both engineers with the fire department, were honored at an end of the year banquet in December.

In early 1994, Kevin was dating firefighter Harris Scott’s daughter. Being a small town, the two families knew each other well. With an eye to his daughter’s future, Scott took an interest in Kevin.

Scott decided to invite Kevin to Thursday night trainings where they practiced rope rescue, spelunking rescues and other adventurous activities. In March that year, Kevin put in his application.

“I pointed out it was a good way to go in life that gives back to the community you live in,” said Scott. “It’s good, honest, hard work for young folk who were looking for a direction.”

Kevin invited his sister Stacy to come to a training, specifically a full moon rappel training off the Mogollon Rim.

“(Scott) told me this is the best time to do this, because you can’t see the 250 feet down,” Stacy said. He then encouraged the slightly frightened Stacy to let go and turn around to enjoy the view. “What do you mean let go!” she exclaimed. With her brother up top helping with the ropes, she did it, albeit reluctantly.

“It was the most killer thing I’ve ever done,” she said.

“Killer view, huh? Just to think you can get paid for this,” said Scott to Stacy. The two were hooked. The pair was hired initially as reserves.

Stacy, a single mom to two boys, 2 and 4 years old at the time, found the work schedule worked well for her. With her parents help, she was able to have more time with her kids. She saw the career path as the best option for raising her boys.

“I felt groomed for a career from day one,” said Stacy.

Kevin realized it was his career choice while working construction. To get hired on full-time, the siblings responded to any call they could to show their earnest desire to be full-time.

“I left the job-site to respond to a call,” said Kevin. “As I left, I was told (by the boss) to choose the department or the job. It was a big turning point.”

They had the full support of their parents. Margie Figueroa, their mother, even volunteered for the rehab committee, a group that brings water and food to assist firefighters.

After their first big fire, the siblings went to the rehab tent, taking off their helmets. Their mother saw their red, sweaty and blackened faces and said, “Awe you guys look hot.” She then licked her thumb and went to wipe off the ash.

“It was a total Mom move,” said Stacy laughing. As the pair backed away embarrassed, Stacy said, “Mom if you do that again you will not be allowed on a fire. She did better after that.”

Within a few years, the two were full-time. Then, as the resident “Mom” for the department, Stacy was recruited to help with a public education presentation at the local schools. She saw an opportunity and ran with it.

“I felt like I could give more to the kids,” said Stacy. “I wanted to make it more fun and interesting for the kids.”

Her captain suggested she attend a puppet and clown program for fire department public educators. She attended and all she could think was that Kevin needed to be a part of this. That first year, Stacy included Kevin by putting him in the Smokey Bear outfit.

He attended the next year’s conference.

Fizzles and Flambé were born; the comic duos alter personalities. Educating students on fire safety through laughter, Kevin and Stacy dedicate hundreds of hours every year to public education. In recent years, they have added Betty and Buckley, the Bunker siblings, to their routine.

With about 30 programs and hundreds of skits and jingles, they are a familiar sight at many community events.

“I’ve been aware of Kevin and Stacy for 20 years,” said Fire Chief Gary Morris. “Even when I was (working) in Phoenix. They have established a reputation, a national reputation within (the public education) community and have motivated similar programs across the country,” said Morris.

Unwilling to brag, Morris did it for the siblings.

“They participate in the burn foundation summer camp for kids who have burn injuries,” said Morris. “Every child that has been through our school knows Stacy and Kevin. They have established a niche, that is really unique. A lot of people know about this little district as being very progressive and having a national impact.”

Early in their careers, both were named PSFD Firefighters of the Year. Kevin also received the PSFD Life Saving Award in 2017. Stacy has gone on to chair the Arizona Fire and Burn Educators conference several years running, that was that class on puppets and clowns she went to more than 20 years ago. She has several awards, including 2013 Arizona State Fire and Burn Educator of the Year.

They currently hold the same position on the same shift. Policy dictates that as family they cannot supervise each other.

“We can say things to each other that no one else can,” Kevin said. “I can’t say enough about my sister. She is truly the hardest working person at the fire department. Stacy will have a legacy within PSFD and it will be noticeably different when she is not a part of the department.”

“Kevin’s smart. That sounds simple but there is so much to it. He is a goof and a prankster but, he is very strong at this job. He knows the trucks, he knows the communities and he knows the skills as an EMT like no other. He is the one you want on your crew,” said Stacy. “When something major happens, I know I’m safe and everything is going to go smoothly because he is either already on scene or on the way.”

Sticking it out for 25 years and counting, the duo say they are grateful for the experiences that can only come from the job, in a community like P-S.

“I have witnessed miracles on this job and been comfort during a person’s worst day ever,” said Kevin. “The job has given me a family network that spans across the country.”

“Everyone goes through a bad day, but we see everyone’s bad days,” said Stacy. “Being there for our community is the greatest feeling ever. Being a part of this community has been more rewarding than I can really put into words. It is going to be very tough to retire from.”

Thank you Stacy and Kevin for 25 years; for your dedication, for the laughter and for all the people you have helped along the way.

Today, Jan. 17 at 3 p.m. is “Crafternoon” for teens and adults at the Isabelle Hunt Memorial Public Library. Guests will be making stamped farmhouse books at no cost. The library will provide jute to tie them together and recommend you bring ribbon to match the decor.

At 10 a.m. Saturday, Jan. 25, kids 5 years and up are invited to the library for the Winter Lego Challenge. There will be prizes.