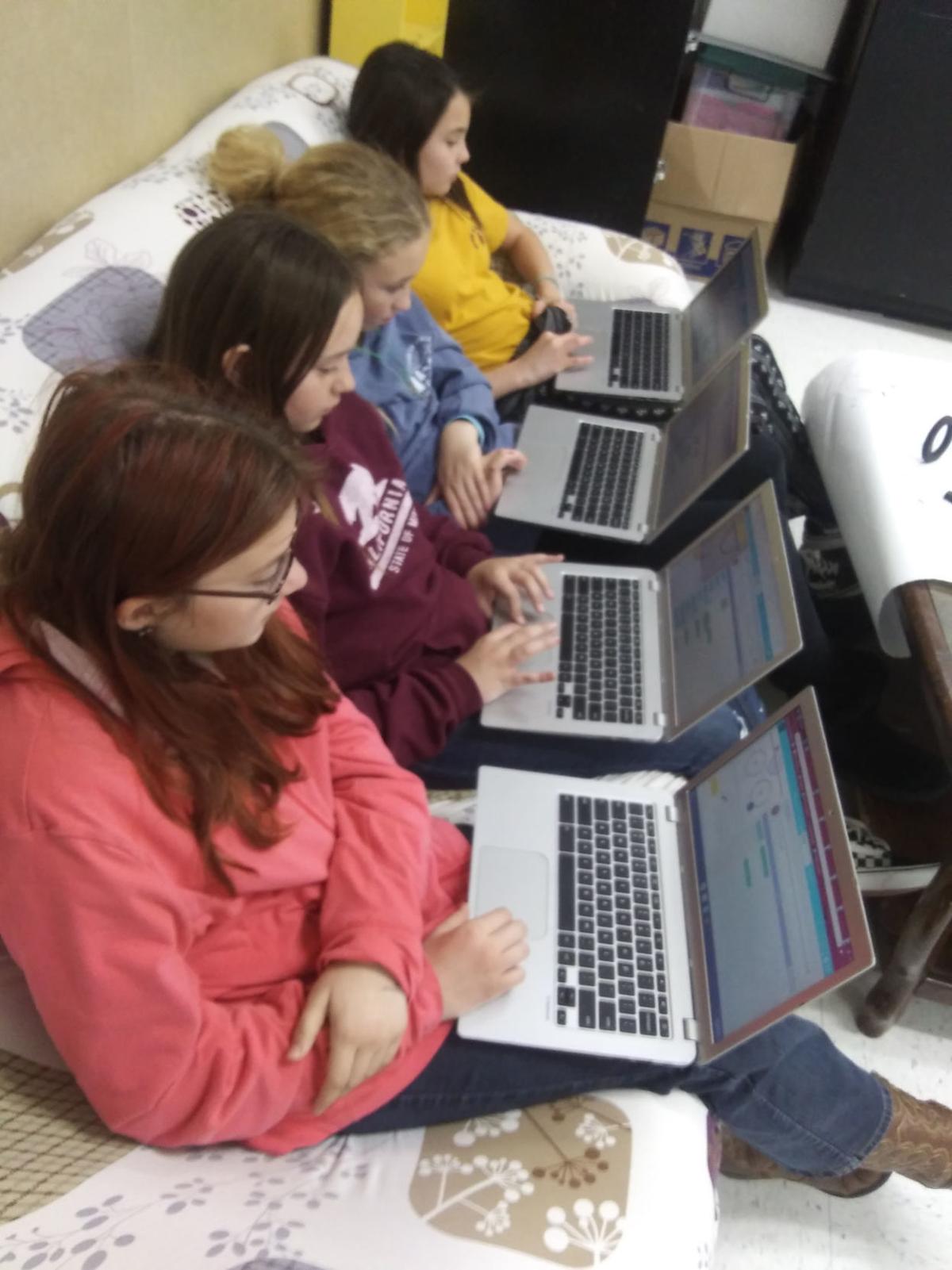 It is state-mandated testing season and time for students to celebrate what they know. 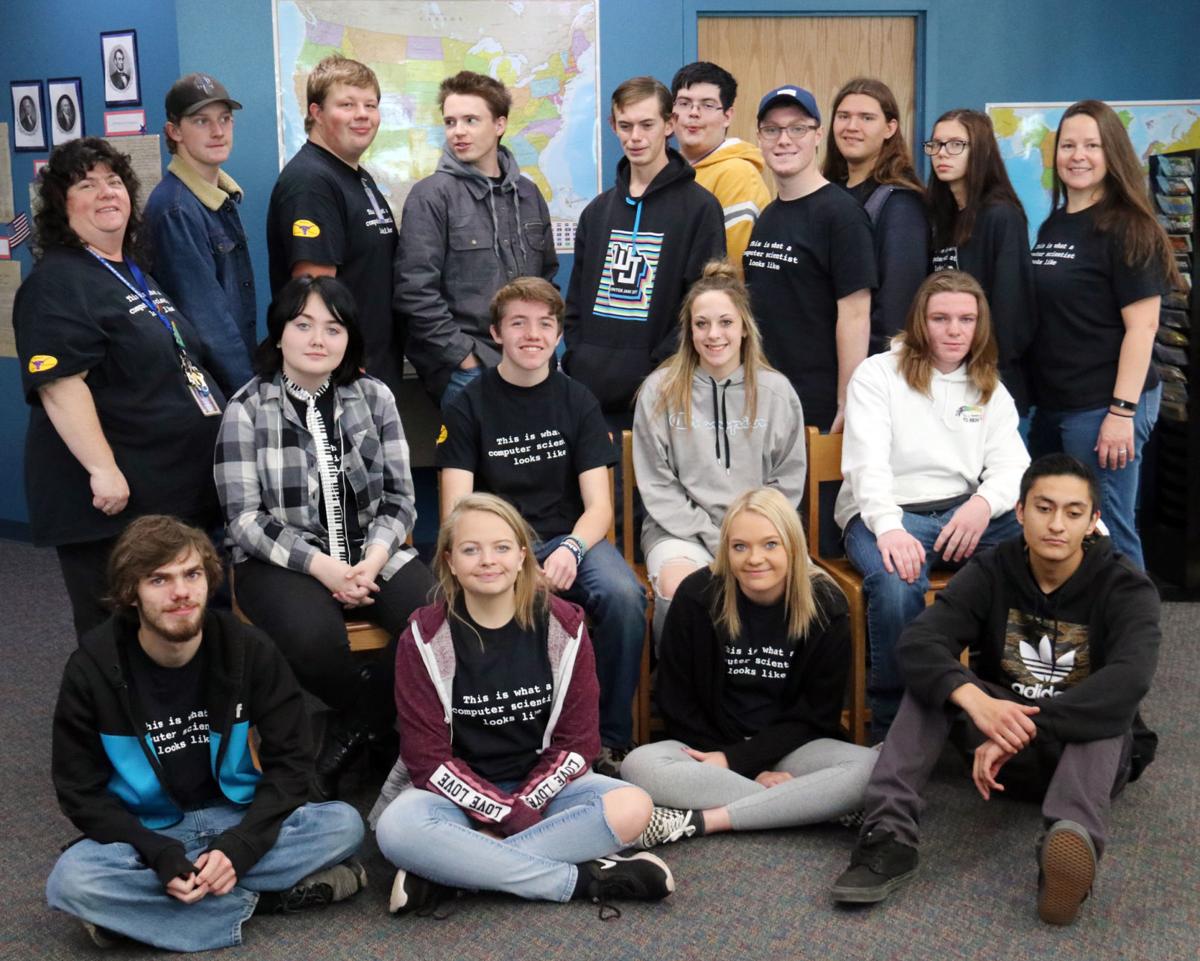 Vicky Andrews (back row, far right), director of technology at PUSD, said she couldn’t have done the Hour of Code at all five district schools without help from student volunteers and her staff, such as Kerry Parker. 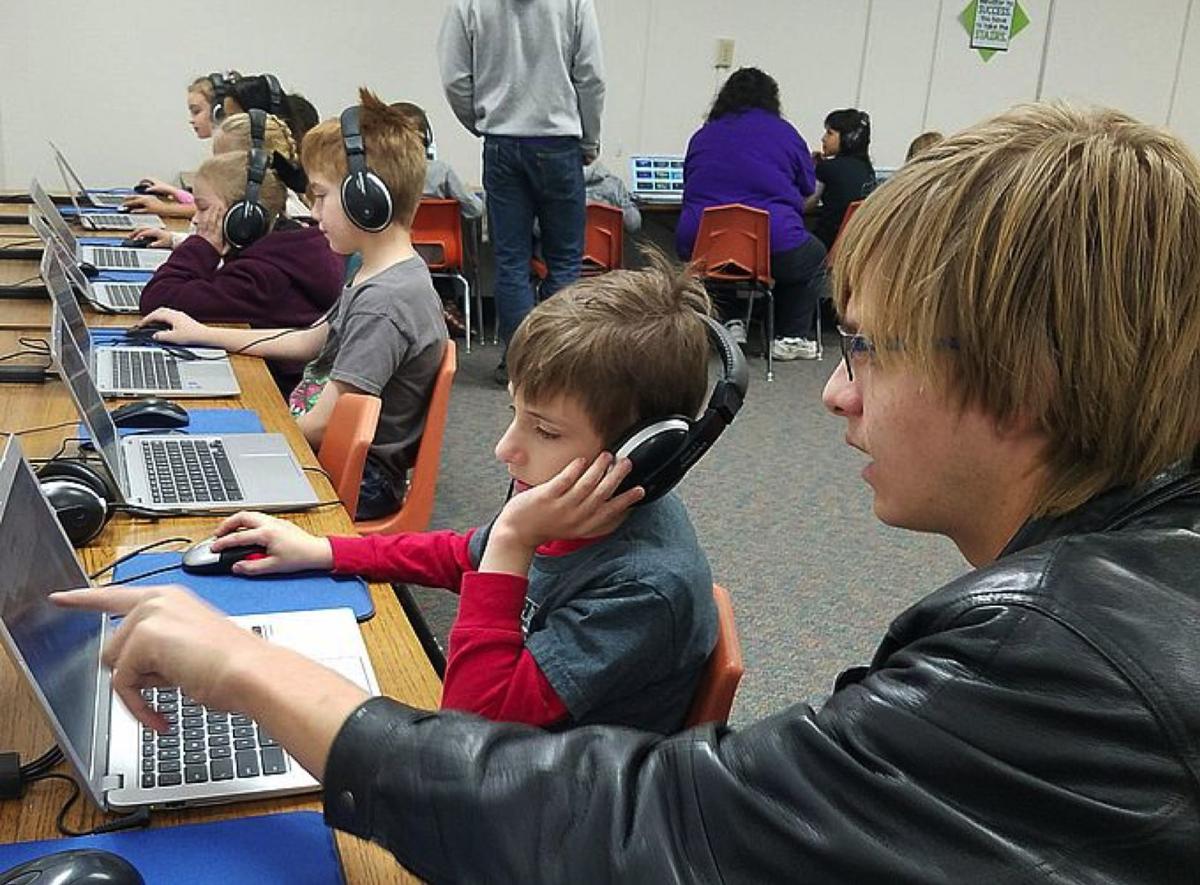 It is state-mandated testing season and time for students to celebrate what they know.

Vicky Andrews (back row, far right), director of technology at PUSD, said she couldn’t have done the Hour of Code at all five district schools without help from student volunteers and her staff, such as Kerry Parker.

The Payson Unified School District has launched an ambitious emergency effort to make sure that this fall every single student will have a Chromebook for classwork.

Students in grades 6-12 will have an internet-connected computer to take home. Students in grades 1-5 will have individual computers that remain in class, so teachers can incorporate online curriculum, testing, lectures and resources into every class.

The bold commitment will also mean students will have much needed access to online learning if a resurgence of COVID-19 requires another semester of stay-at-home learning in the fall. The district this semester discovered that somewhere between 10% and 30% of the students have neither a computer nor internet access at home.

Parents will likely have to pay a fee — or at least make a deposit — to enable the district to effectively self-insure against damage to the devices. The fee could come to $50, but the district will also explore ways to cover the fee for students who can’t afford it.

“When COVID hit, we saw what remote learning could and would look like. Now we’re trying to do in eight weeks what we’d planned to do in 14 months,” said Victoria Andrews, the district’s IT director. “We are designing for a future that we don’t quite have a full grasp of — this is something straight out of some science fiction movie at some level.”

The board had already committed $200,000 to upgrade 20% of the district’s existing fleet of Chromebooks. Currently, the district has about 3,000 Chromebooks — low-cost computers with built in software on which students can write papers, take tests, access the internet, listen to lectures and even make videos and presentations. The mini-computers can be wheeled into class for lectures and exercises, but don’t go home with students.

The district hopes to use some $430,000 in federal grant money promised to help the district cope with the impact of a semester of online learning forced by the COVID-19 school closures to buy enough Chromebooks to outfit every student with his or her own device by the time classes start — in whatever form — in August.

The plan would enable the district to reduce its current fleet of Chromebooks by about 350, since the classroom computer carts wouldn’t have to have the maximum number of needed devices for every single class, said Andrews. However, the plan calls for the district to update many of its existing devices, some of them five to seven years old and no longer software supported.

An internal survey found that 94% of the teachers and staff supported the so-called “one-to-one” approach to outfit each student with the 11-inch, touchscreen computers, with a screen that can also fold back and function as a tablet.

“Pulling this off in eight weeks is going to be a Herculean effort,” said Andrews, which includes buying some 630 new Chromebooks and configuring the whole fleet for the new system and permissions. Students in the upper grades will need up-to-date devices so they can take the standardized tests on the computers, which will greatly speed analysis and tracking to identify student learning issues.

“I think this is a wonderful idea,” said board president Joanne Conlin, “and really well thought out.”

Andrews preceded her presentation with a 1995 quote from Nobel Laureate Dr. Herbert Simon about the transformation in learning and knowledge brought about by the internet. “The meaning of knowledge has shifted from being able to remember and repeat information to being able to find and use it.”

Linda Gibson, who will take over as superintendent in July, said, “It’s not about regurgitating information now. It’s about learning how to be resourceful and learning whether your resources are valuable. We need to teach our students how to take that next step to further investigate what they’re hearing and what’s being said — how to research and get to sound conclusions.”

As principal of Payson Center for Success, she helped the alternative high school earn an A rating from the state for her implementation of a blended online/in-class learning approach.

Acting Superintendent Mark Tregaskes commented, “This is a thoughtful approach to address an urgent need brought on by COVID-19. It really is. Even though they had to ramp up in a hurry, you can see they put a lot of thought into what’s happening.”

Andrews noted that the abrupt closure of the campuses over spring break provided a crash course for staff, faculty, students and parents in online learning tools — from conducting a Google Meet class session and recording lectures with supporting slides and videos to turning in homework assignments and taking tests. The IT department has offered a host of classes for faculty members in how to use the array of new tools and methods. Fortunately, the district had already qualified as a “Google Reference District,” which means many faculty members had already learned to use the classroom management and presentation tools.

“We have offered quite a large catalog of training opportunities this quarter. That means being able to leverage experts around the world. So if you’re doing a lesson in space exploration, you might not get the general in charge of Space Force to swing by Payson anytime soon — but you can include a video of him speaking. We really want to make sure we’re preparing our kids for the workforce. There are just so many applications — it’s a thousand times more than a way of typing up a paper.”

Studies have shown that properly designed online learning approaches can work as well as traditional, in the flesh classes. However, many studies suggest the mixture of online learning approaches and personal contact and guidance from the teacher work best. In the past semester, teachers have acknowledged that a certain percentage of students all but disappeared as the semester went on — despite efforts to contact them or their parents. Moreover, the abrupt shift to completely online learning put students without a computer or internet connection at a profound disadvantage — despite the provision of paper packets with homework assignments.

The district hopes that the alternative approach will mingle the benefits of both classroom and online learning, while ensuring equal access. The district hasn’t tackled the problem of students who don’t have internet at home — but both federal and private industry initiatives may address that gap in the future.

“Our teachers hit it out of the park this semester in terms of retooling on the fly,” said Andrews, who worked long hours for weeks conducting classes to bring faculty members up to speed on the new tools available. “But we need to give some of them more support. We can make it a lot more manageable for them.”

The administrators are still trying to figure out how to deal with the likelihood some students will damage or even lose the computers, which cost $200 to $400. The law prevents the district from charging students for access to technology, since that would create an unconstitutional disadvantage for students from poor families. About half of the families in the Payson school district qualify for free-and-reduced school lunches based on family income. However, the district can charge class fees to cover the cost of materials. The charge for advanced placement classes and tests can come to several hundred dollars, as does the cost of participating in sports.

“We don’t want this to be something that keeps kids from being on track in their learning. At the same time, the district cannot accept hundreds of thousands in losses. We talked about trying to start a scholarship program for kids who cannot accept the fees. We’re looking at different models. It might be a class fee. A deposit. Also, our seniors might be able to purchase their devices at the time they leave us.”

The district will also have to grapple with internet security, and access issues. The district has more control over computers that remain on campus. The server can block access to inappropriate websites and the IT department can also monitor what’s on a student’s screen. Once the computers go home, many of those controls go away due to privacy laws.