Sign Up
Log In
Purchase a Subscription
You have permission to edit this article.
Edit
Home
Outdoors
Hiking & Trails
Hunting & Fishing
Lakes & Streams
Places to Go
Things to Do
Wildlife
Features
1 of 4 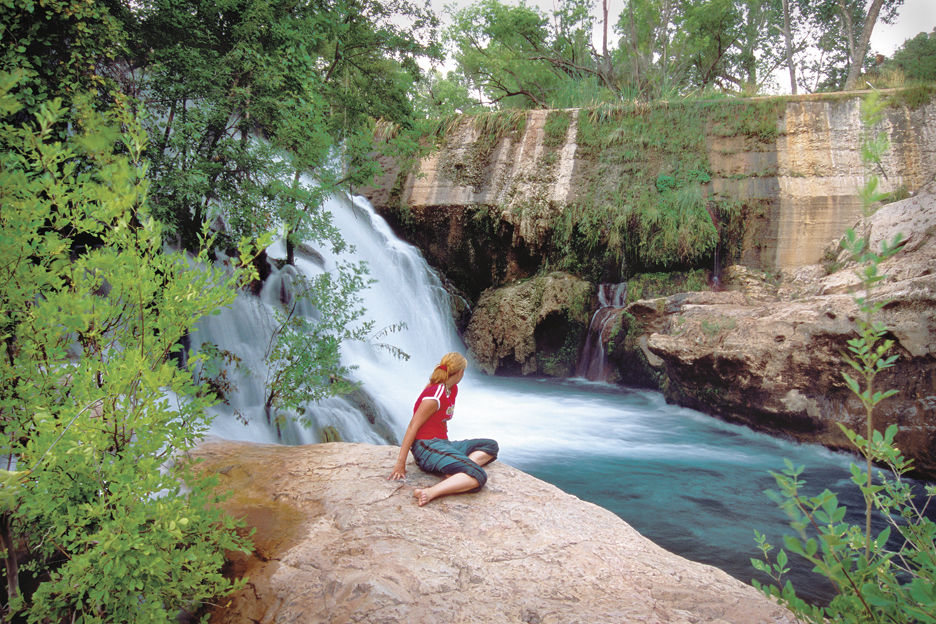 Fossil Creek owes its remarkable geology to a 340-million-year-old layer of Redwall Limestone. 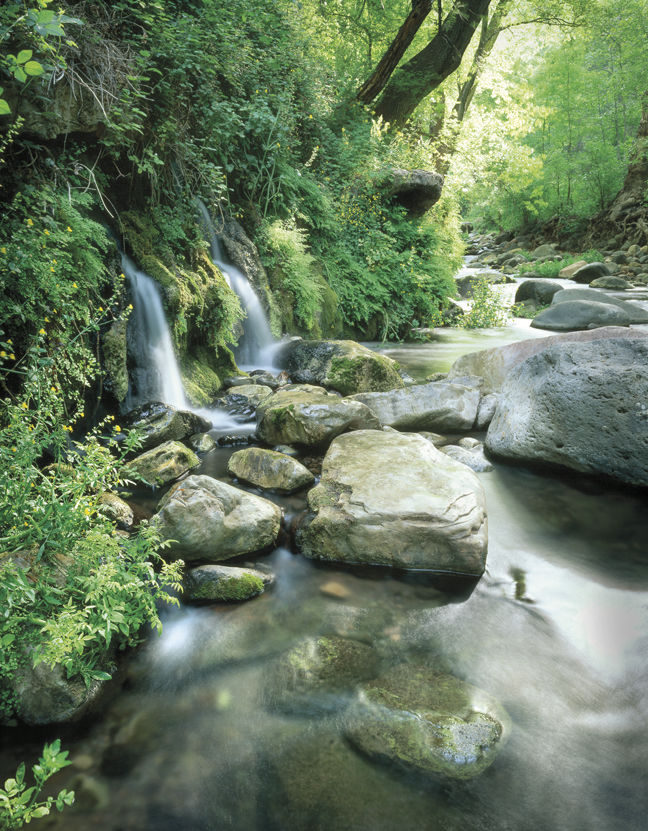 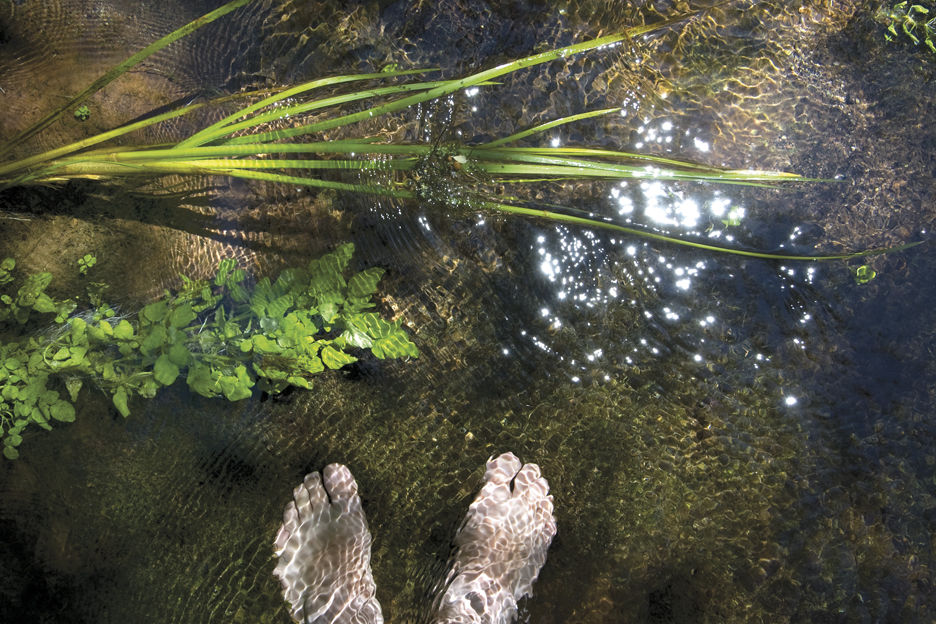 If Fossil Creek is loaded with travertine, why’s it so clear? Because the minerals are chemically bonded to the water molecules, until they precipitate out. 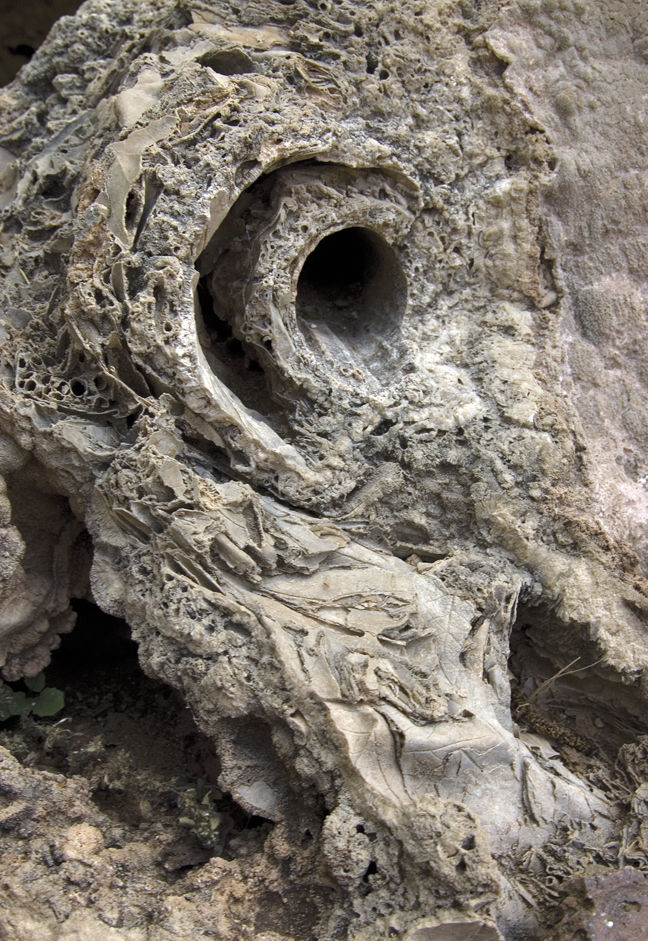 The travertine, essentially made of dissolved limestone, precipitates out of the water, coating rocks and roots — thereby earning Fossil Creek its name.

Fossil Creek owes its remarkable geology to a 340-million-year-old layer of Redwall Limestone.

If Fossil Creek is loaded with travertine, why’s it so clear? Because the minerals are chemically bonded to the water molecules, until they precipitate out.

The travertine, essentially made of dissolved limestone, precipitates out of the water, coating rocks and roots — thereby earning Fossil Creek its name.

The three outstanding examples of where this water transmitter finds the surface at the sides of deeply incised streams in Arizona are: Montezuma’s Well on Beaver Creek near McGuireville, Fossil Springs on Fossil Creek near Strawberry and the Tonto Natural Bridge on Pine Creek near Pine. Same source of water, same travertine deposition, yet each forming a different geologic feature at the surface.

Fossil Creek, whose waters were diverted for nearly a 100 years to generate electricity now flows free as an officially designated Wild & Scenic River. Home for only native fish, Fossil Creek waters are once again doing what they have done for thousands of years — slowly building back the travertine deposits that formed the many terraces and pools that existed when Fossil Creek was first discovered — from which it drew its name.

The laudable effort to remove the non-native species and return the flow below the springs to its former channel is beginning to show results. It is a prime venue to see geology in action!

The Redwall Limestone formed more than 300 million years ago in a shallow, inland sea from the calcium-rich skeletons of microscopic sea creatures and other things that settled into the seabottom mud layers. In the Grand Canyon, the hard Redwall Limestone layer forms a chain of sheer cliffs 500 to 800 feet tall, thanks to the chert and fine-grained dolomite embedded in its layers.

But when buried and washed by groundwater running through cracks and fissures, the Redwall Limestone can create springs with remarkable geological qualities.

Fossil Springs flows from a myriad springs and seeps along a 1/3-mile stretch of the creek where the Redwall Limestone nears the surface. The waters that issue from the springs are filled to capacity with calcium carbonate, carbon dioxide and other minerals. At the surface, these minerals can no longer remain in solution. Change in temperature, oxidization potential and contact with organic material causes the CO2 and Ca to combine and make travertine, a mineral called aragonite. Even in fast-flowing streams like the 20,000 gallons per second Fossil Creek, deposition is inevitable.

The Malussa report (see references below) states that early observers found many travertine dams with deep pools behind them. Field studies in 1996 identified the eroded remnants of at least 80 such dams. After the creek’s natural flow was restored in 2008, hundreds of new travertine dams began to form along a six-mile stretch below Fossil Springs. Malussa estimates the stream deposits about 13 tons of travertine per day along its banks.

It does not take much time to drop the minerals and build up dams, mounds, coatings and casts. Fossil Creek may not return to what it was exactly, as geology does not go backward, but it will form a new Fossil Creek with the same processes and likely pleasing results.

After you visit, swim or photograph at Fossil Springs, step back and look beyond the waters. Perched above the current stream channel is a thick flat terrace also made of travertine. Not only are dams making new clear-water pools now, it happened before. When? Well, we do not really know, but we can speculate.

Fossil Creek, Tonto Natural Bridge and even Montezuma’s Well appear to have major deposits of travertine cut through by erosion after the water table level dropped by up to 150 feet. We don’t know when the travertine layers were deposited, yet studies of travertine in eastern Grand Canyon National Park and Springerville, Ariz., indicate they likely formed during times with a lot more rainfall.

USGS scientist Barney Szabo reports that uranium dating indicates the deposits formed at around 15,000, 71,000, 111,000, 171,000, and 338,000 years. That coincides with high paleolake levels, montane glacial maxima, and high paleowater-table levels from several Great Basin localities. Could be the Fossil Creek terraces date to those same periods.

But here’s another Fossil Creek riddle: If the water carries so many minerals, why does it remain so clear?

That’s because the minerals remain in solution, bonded to the water at the molecular level and therefore not visible to the naked eye.

And, whether a stream is clear depends mostly on silt and sand it’s carrying. After seeping through the Redwall aquifer for tens or perhaps hundreds of miles, not only does the water pick up the minerals in the rock it also sheds any silt or sand. Any water treatment plant would love to have the quality of the filter these waters have passed through. Only after surfacing does the creek pick up and move sand and silt, but only after moving for miles downstream over the travertine-coated stream-bottom.

The springs probably flowed out of the exposed side of the Colorado Plateau for several periods as long as perhaps 10,000 to 300,000 years ago. Settlers used the flow to generate power for about 100 years, which is but a geologic wink in time. Now the stream has returned to doing what it has done several times before, making pools and making rocks.

As a side note: I got into a debate with one respected biologist friend of mine about the effects of the most invasive species the globe has ever known — humans. I argued that what we do is more important than how many people are doing it.

He tried to rebuff my argument by saying, “I miss the passenger pigeon and other species that are gone.”

And I said, “I miss the trilobites and dinosaurs.”

He countered, “Your problem is you use geologic time.”

Well, until a better time measure is found, yes, we can take comfort from the lessons at Fossil Creek. Time will not reverse, change is a cornerstone to what the earth does, and if left alone, the earth will move on, with us or without us.

If you hike down, please, oh, please go prepared with water, good shoes, hat, sunscreen and enough time to walk out safely.

For the photographer, a tripod, filters, wide-angle lenses and even macro equipment will be put to good use. Return each year to record the changes that real-time geology is offering up.