The Longhorns celebrate their 34-33 overtime win over No. 4 Snowflake on Friday. 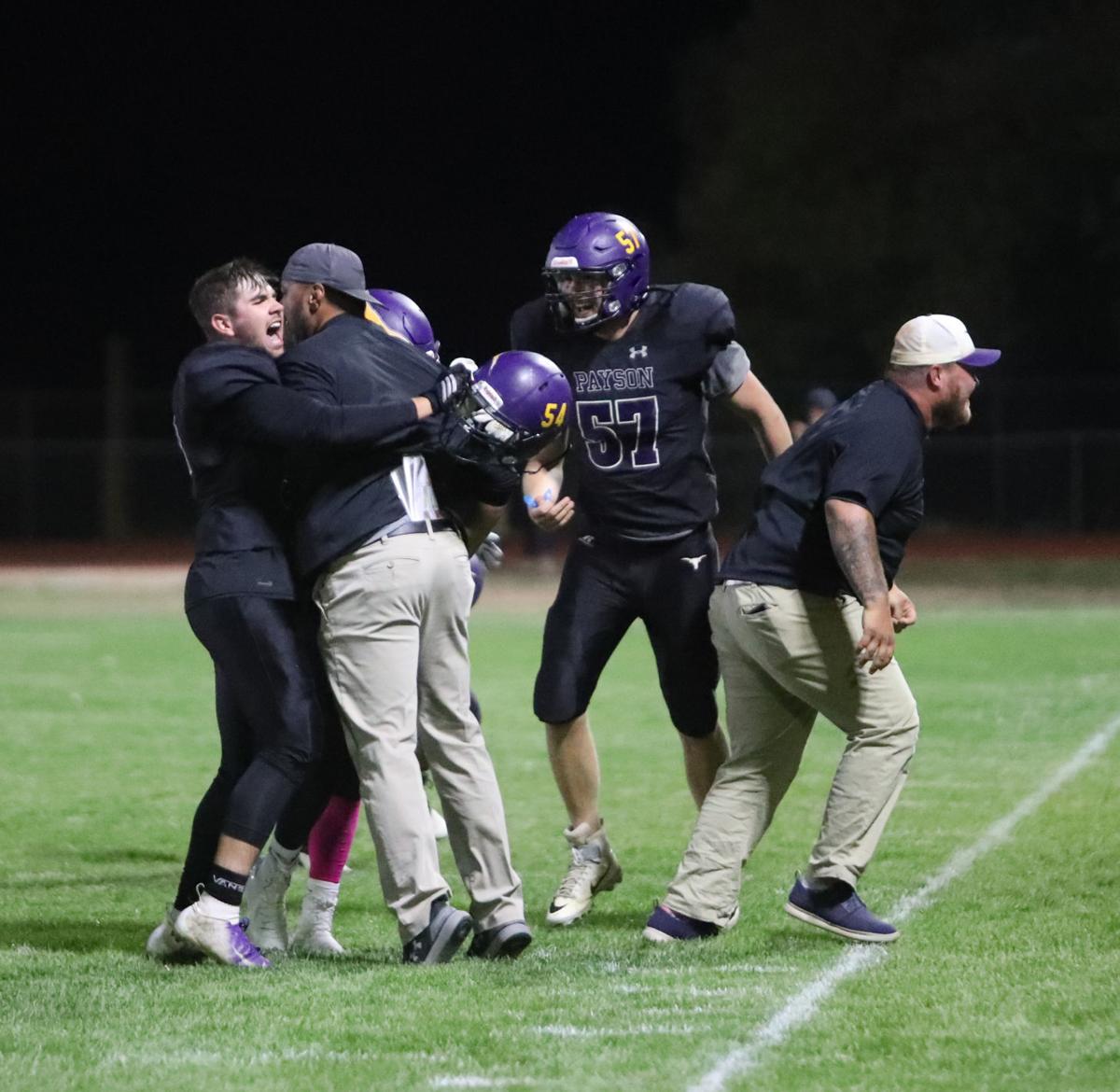 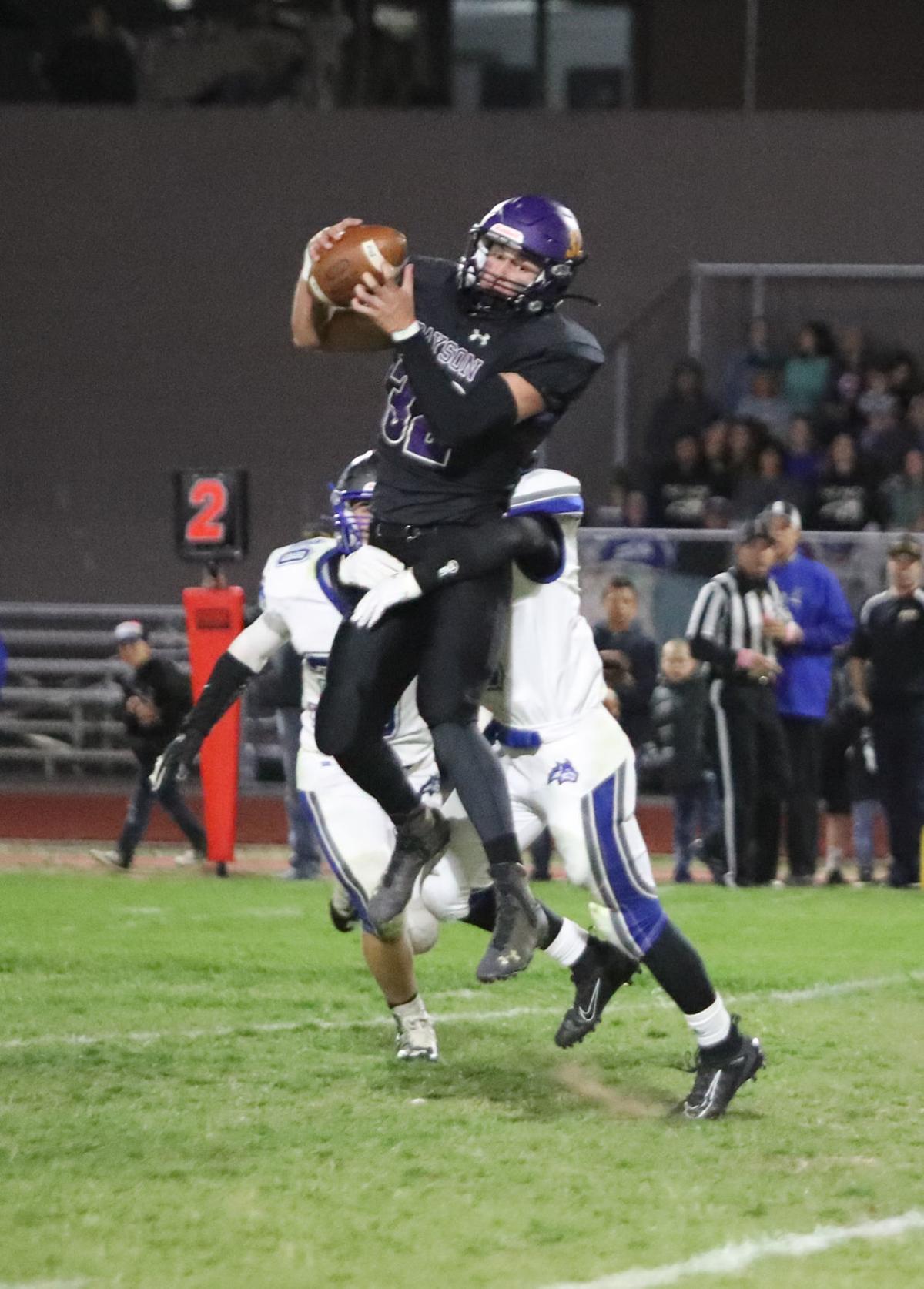 Porter Flake goes up for a catch. The senior finally experienced a victory over his cousin Taylor’s Snowflake team after losing the first eight battles.

The Longhorns celebrate their 34-33 overtime win over No. 4 Snowflake on Friday.

Porter Flake goes up for a catch. The senior finally experienced a victory over his cousin Taylor’s Snowflake team after losing the first eight battles.

Yes, oh yes they can.

The Longhorns could have hung their heads and felt sorry for themselves after watching visiting Snowflake build a 20-point lead late in the first half on Friday night.

Hey, it would have been understandable. After all, the fourth-ranked Lobos have dominated Payson over the last decade. Snowflake (5-2) entered the game having won its last eight regular-season meetings between the teams. And most weren’t close.

But these Longhorns don’t care about the past.

They picked themselves up and played with the hearts of champions to dominate the second half and pull out a thrilling 34-33 overtime victory in a battle of 3A East unbeatens at Longhorn Stadium.

The triumph ranks as one of the biggest Payson’s produced in the last 11 seasons.

The Longhorns should take a big leap up this week’s 3A rankings, which are revealed today.

“It was a phenomenal game,” Burke said. “Everybody made a play when we needed them to. Man, I can’t tell you how proud I am of our response.

“When the ball doesn’t bounce our way, how do we respond? That’s what we talk about all the time. We haven’t been in this situation in a game, yet. But this is what true championship teams, what true contending teams have to go through at some point.

“It was a gut-check for us and shoot, we passed.”

Payson hasn’t won a region championship since steamrolling to the 3A East crown in 2008.

But the Longhorns established themselves as a contender this season by knocking off a team they’d gone 1-9 against in the 10 meetings since beating the Lobos twice in going 14-0 in 2008.

Payson’s only win against them since was a 7-6 triumph in Snowflake against the No. 2 Lobos in the first round of the state tournament in 2016.

That is the only playoff win Payson has had since 2008. So that victory certainly ranks as perhaps the biggest win in the past 11 seasons. A 20-19 win at Blue Ridge in 2015 also ranks high on the list.

But this could wind up being just as significant if the Longhorns can continue to perform this well in the final three weeks of the season starting with Friday’s game at Show Low.

This was their first real test of the season after rolling over weaker opponents in a strong 5-1 start.

Snowflake marched up and down the field in scoring four touchdowns to go ahead 27-7 with 2:27 left in the second quarter.

But maybe Burke’s belief in his players was the key as something changed after he yelled that support.

Jesse Conway hauled in a 73-yard bomb from Trevor Cline 29 seconds later to cut the deficit to 13 points at the break.

And Payson ran 8:10 off the clock in a 17-play, 80-yard drive that showed these Longhorns are sick of losing to teams like Snowflake and talented enough to do something about it.

“Those other eight games, I just said, ‘There’s always next year.’ Now I can’t say that.

“Us seniors in the huddle we were just like, ‘There’s no next year, we have to leave it all on the field.”

Cline capped the impressive opening drive of the second half on a 5-yard run to make it 27-21 and let the Lobos and the fans know they weren’t rolling over against anyone.

Conway then raced 22 yards around end to tie the score with 4:43 to play. A bad snap led to a missed extra point that would have given Payson the lead.

The visitors had a chance to win it on the final play but a 46-yard field goal attempt fell short. In overtime, teams start at the opponents’ 10-yard line and get four downs to score.

Payson won the toss and went on defense. Snowflake’s Brig Turley scored his third touchdown of the game on a 10-yard run on the first play. But Snowflake went for two and Payson’s defense stopped the run short of the end zone.

When Payson got the ball, Cline picked up seven yards on first down and scored from the 3 on second down. After a timeout, Mike Dominguez kicked the extra point to give Payson the victory, igniting a joyous celebration by players, coaches, and fans.

Snowflake’s Taylor Flake broke a scoreless tie by hauling in a 66-yard touchdown pass from Ethan Ramage with 1:35 left in the first quarter.

Cline hit Kyle Shepard on a crossing pattern that turned into a 66-yard touchdown reception to get the Longhorns on the board with 5:50 left in the second quarter.

Medical staff pulled Shepard off the field for a possible concussion in the second half. He remained on the sideline to cheer his teammates on.

Connor Faust blocked an extra point following a 16-yard TD run by Terren Green with 4:26 to play in the second quarter but Snowflake still led 20-7. The Lobos built a 27-7 lead on a Turley 1-yard run after the visitors somehow recovered the ensuing kickoff at the Payson 29-yard line.

But the Longhorns took over from there.

And they’ll look to keep rolling at Show Low on Friday.

Who are you voting for Gila County sheriff?