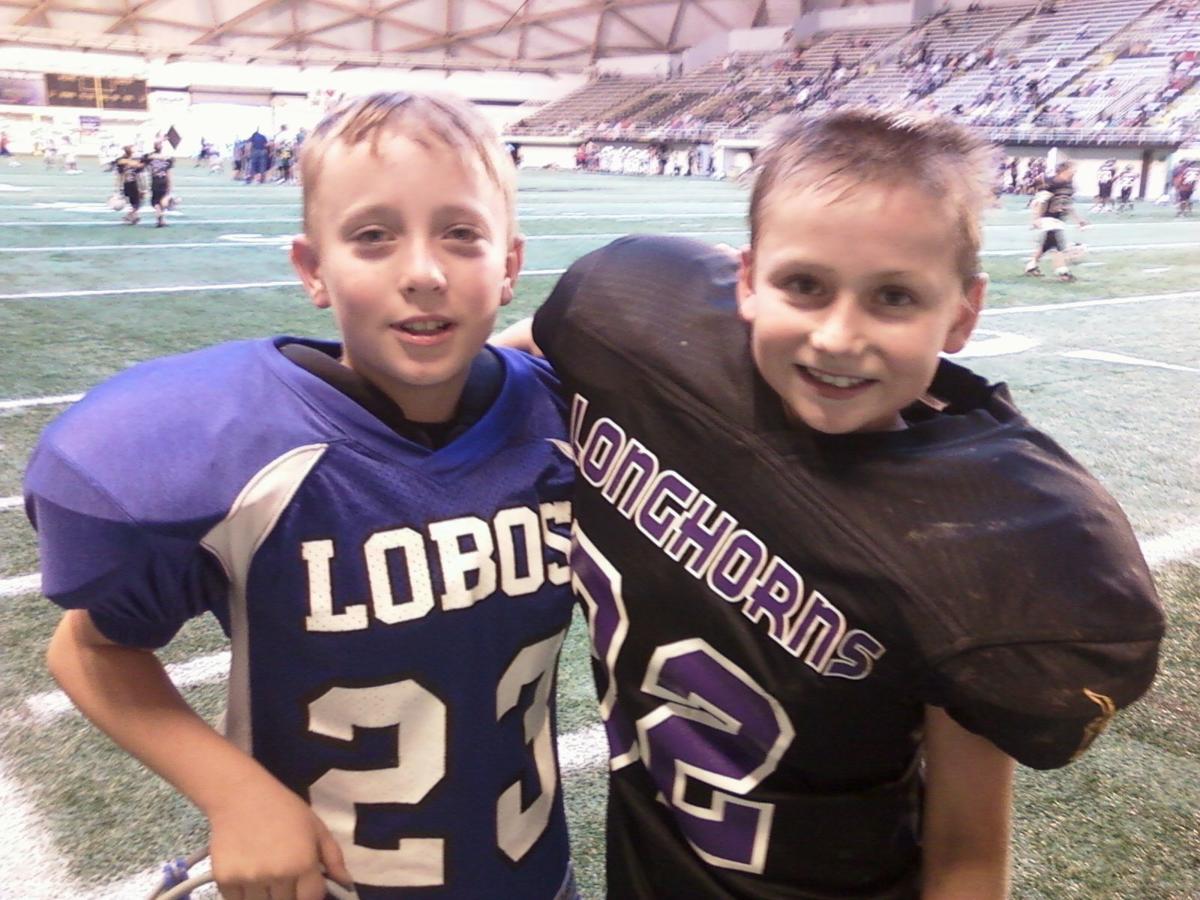 Cousins Taylor (left) and Porter Flake have been competing on the football field since they were kids. They are now seniors in high school. 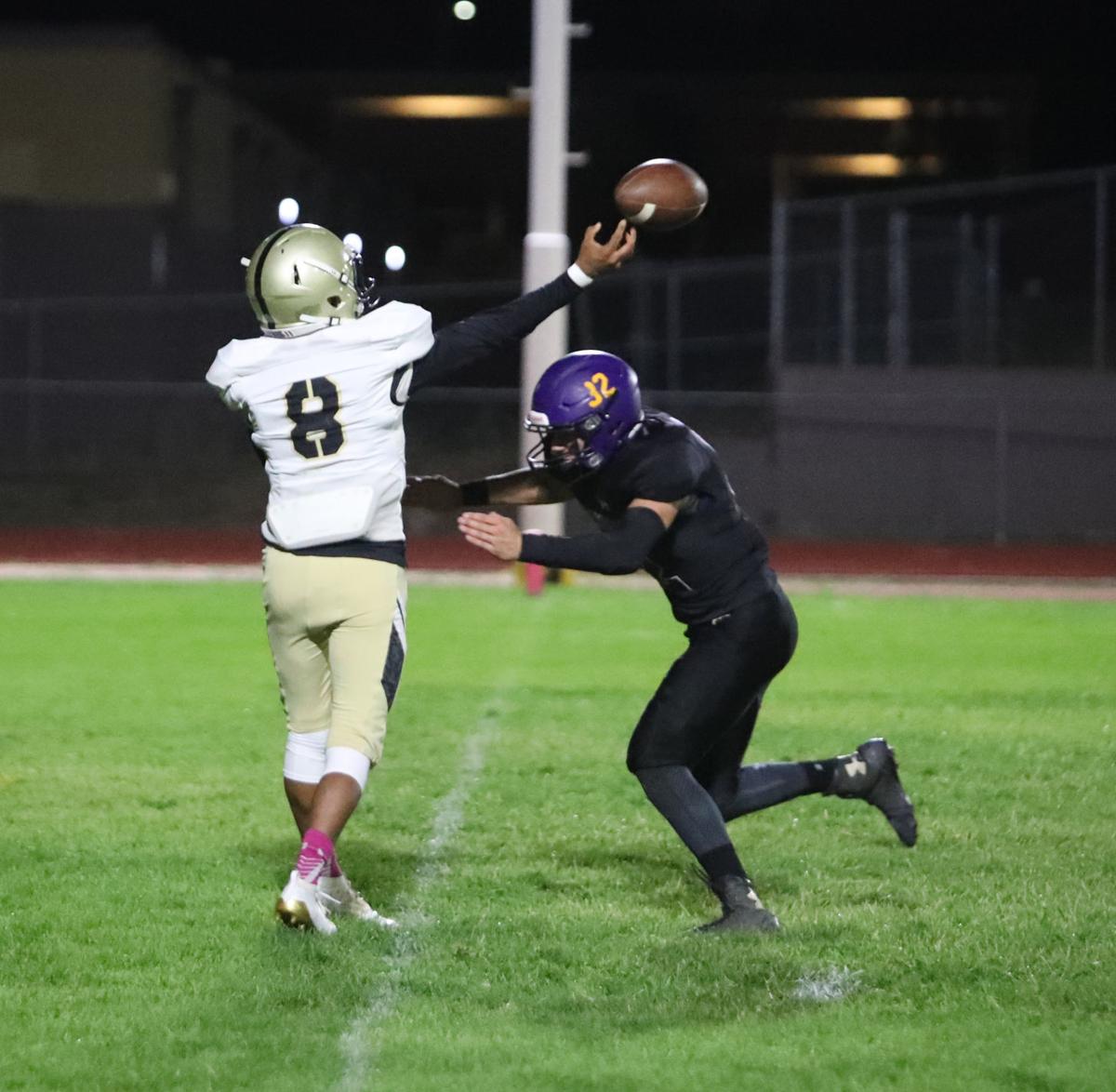 Porter Flake closes in on Chinle’s quarterback just as he gets the pass off. The middle linebacker/tight end has been a key contributor to Payson’s strong start this season.

Cousins Taylor (left) and Porter Flake have been competing on the football field since they were kids. They are now seniors in high school.

Porter Flake closes in on Chinle’s quarterback just as he gets the pass off. The middle linebacker/tight end has been a key contributor to Payson’s strong start this season.

Porter Flake plays football against his cousin Taylor every year.

Porter is a senior tight end/linebacker for Payson. He wears No. 32.

Taylor is a senior S-back/linebacker for Snowflake. He wears No. 7.

They started facing each other as fourth-graders playing youth tackle football.

Their teams have played every year.

And Porter enters tonight’s varsity football game still looking for his first win over his cousin.

Porter’s Payson teams have come close a couple of times.

Neither played in Payson’s 7-6 varsity playoff win at Snowflake in 2016. Taylor didn’t make the varsity that year. Neither did Porter, but he was called up and added to the roster for the playoffs and was on the sideline watching that thriller.

“I didn’t get any playing time, but my grandpa and my two uncles, they do the chains (in Snowflake),” Porter said. “So they were on the sideline with me the whole game. It was a very exciting game. My feelings were going up and down like a roller coaster and it was a crazy game to watch.”

Tonight’s game is huge for both teams. The winner will be alone in first place in the 3A East.

But a Longhorn win will go a long way toward establishing them as a team to be reckoned with. And it will also be sweet revenge for a young man who’s been waiting his whole life to celebrate with his teammates in a game against his cousin.

“Payson’s always the decent team, but the underdog, and Snowflake’s always the best, the team to beat,” Porter said. “Now that it’s my senior year, there’s really no one I want to beat more than Snowflake. That goes for all sports, even track. If I beat a Snowflake kid in a race, it’s a big deal because they take sports very seriously. So a lot of pressure gets built up from the time we play them until the next time we play. I always wanted to say, ‘We are the victors.’”

Porter said Taylor doesn’t rub his team’s success in as much as he could.

“He’s pretty humble, pretty good about it,” Porter said. “He knows if he talks smack I’ll come back with the fact that Snowflake hasn’t won a state title in football since his dad played in the 1990s.”

Porter made it clear he respects the Lobos.

“In the past he has gotten a little cocky because he takes a lot of pride in his team and I don’t blame him,” Porter said. “They’re a great community and have a great sports program.”

Porter figures he’d be considerate of his cousin’s feelings if the Longhorns win tonight.

“I think I would be pretty humble about it, but I don’t think I’d ever let him forget about it,” Porter said. “I don’t think I’d rub it in too much, because I know what it’s like to be on the other side of that.

“Family’s important and we have our whole lives ahead of us and I wouldn’t want sports to hurt or relationship.”

Porter is ready for this game.

“I’m more than excited,” he said. “I’ve always waited for these moments.”

“For many years we have enjoyed this generally friendly family rivalry,” Scott Flake said.

“We have family planning to come into town and we’ll do some type of tailgate dinner before the game. My parents who are avid Lobo fans always have a hard time cheering for their Payson grandson.”

But he and plenty of others will cheer loud enough to make up for it should things unfold the way Porter hopes they do.

“Now that it’s my senior year, there’s really no one I want to beat more than Snowflake. That goes for all sports, even track."

Do you agree with the town's decision to hold the Fourth of July fireworks show this year?