Right fielder Kayde Johnson celebrates after catching the final out in Payson’s 3-2 victory over the #1 team in 2A, Benson, on Saturday. The Bulldogs were 17-0 before the Longhorns beat them to avenge an earlier loss. 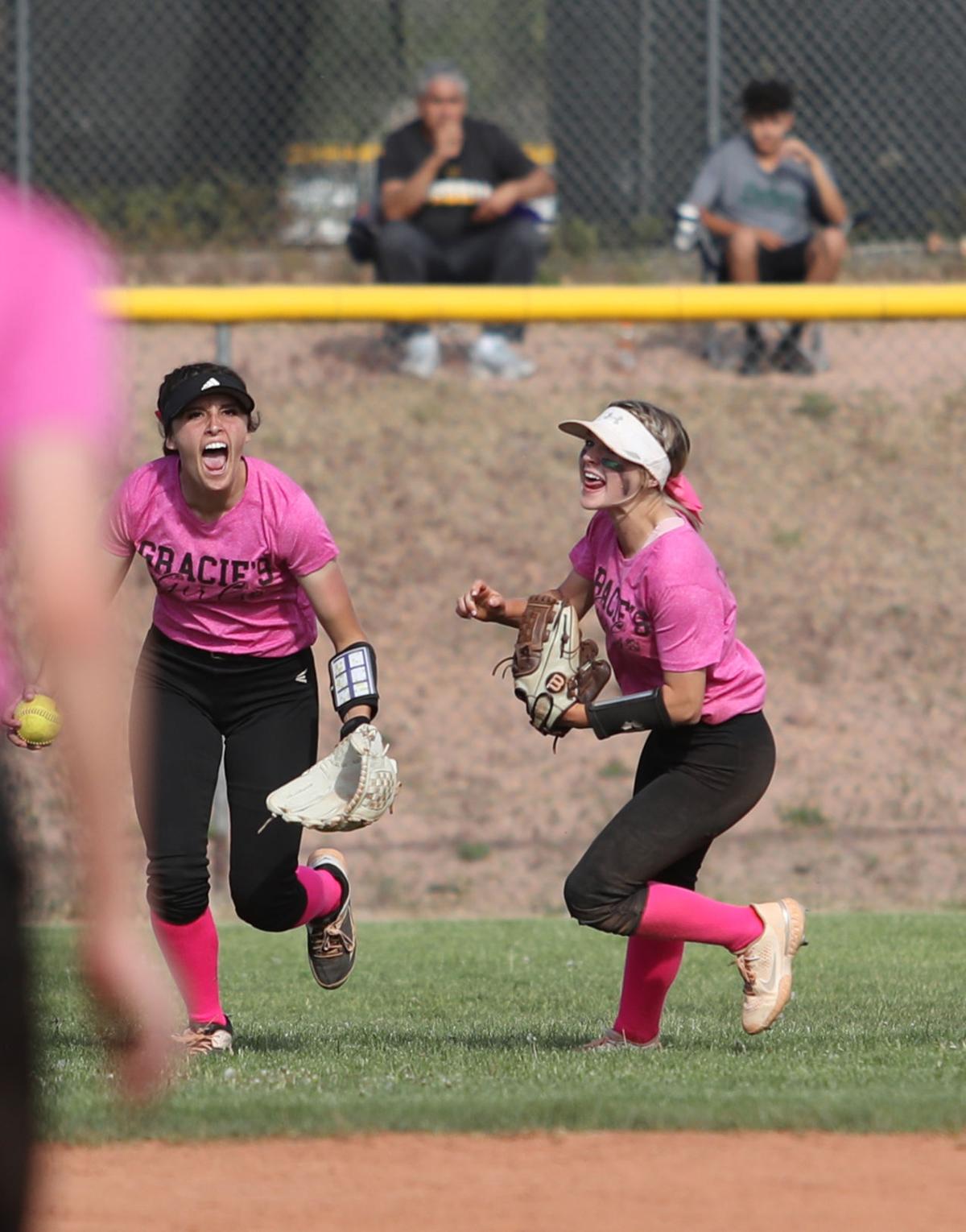 Above, right fielder Kayde Johnson celebrates with second baseman Missy Chiccino after Johnson caught the final out of Payson’s 3-2 win over previously unbeaten Benson on Saturday. Below, center fielder Kaylee Boone tries to make a spectacular catch but the ball pops out of her glove when she hit the ground. See the Roundup’s Sports Facebook page for more photos. 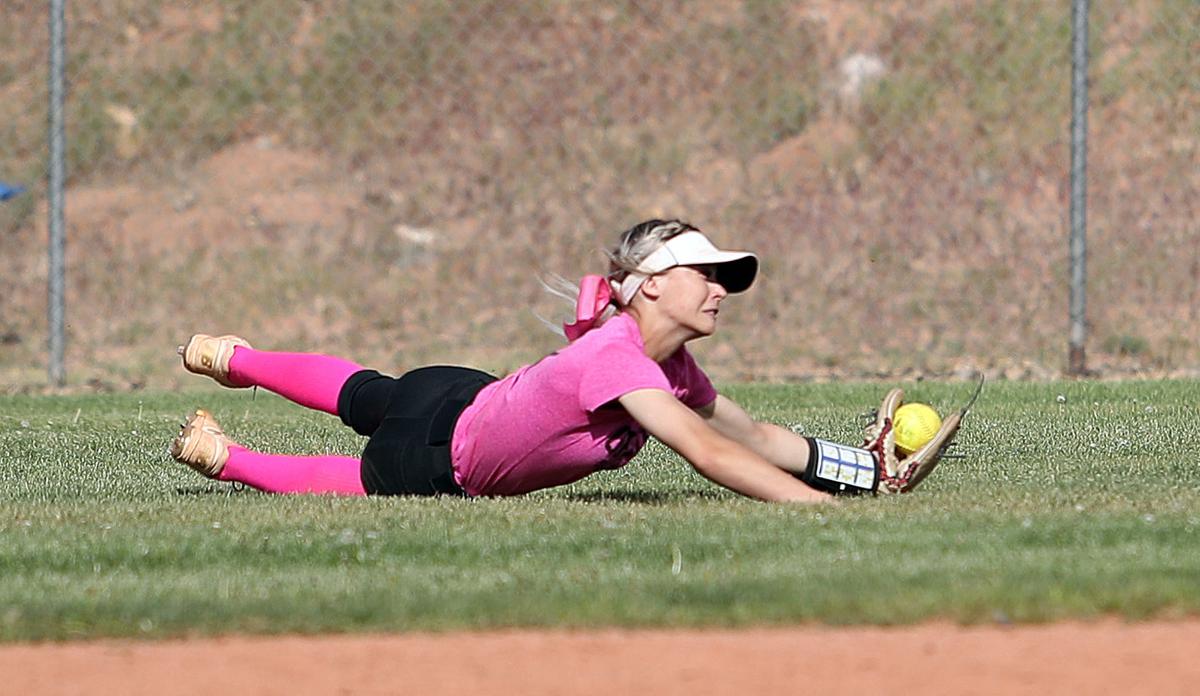 Center fielder Kaylee Boone tries to make a spectacular catch against Benson on Saturday but the ball pops out of her glove after she hits the ground. 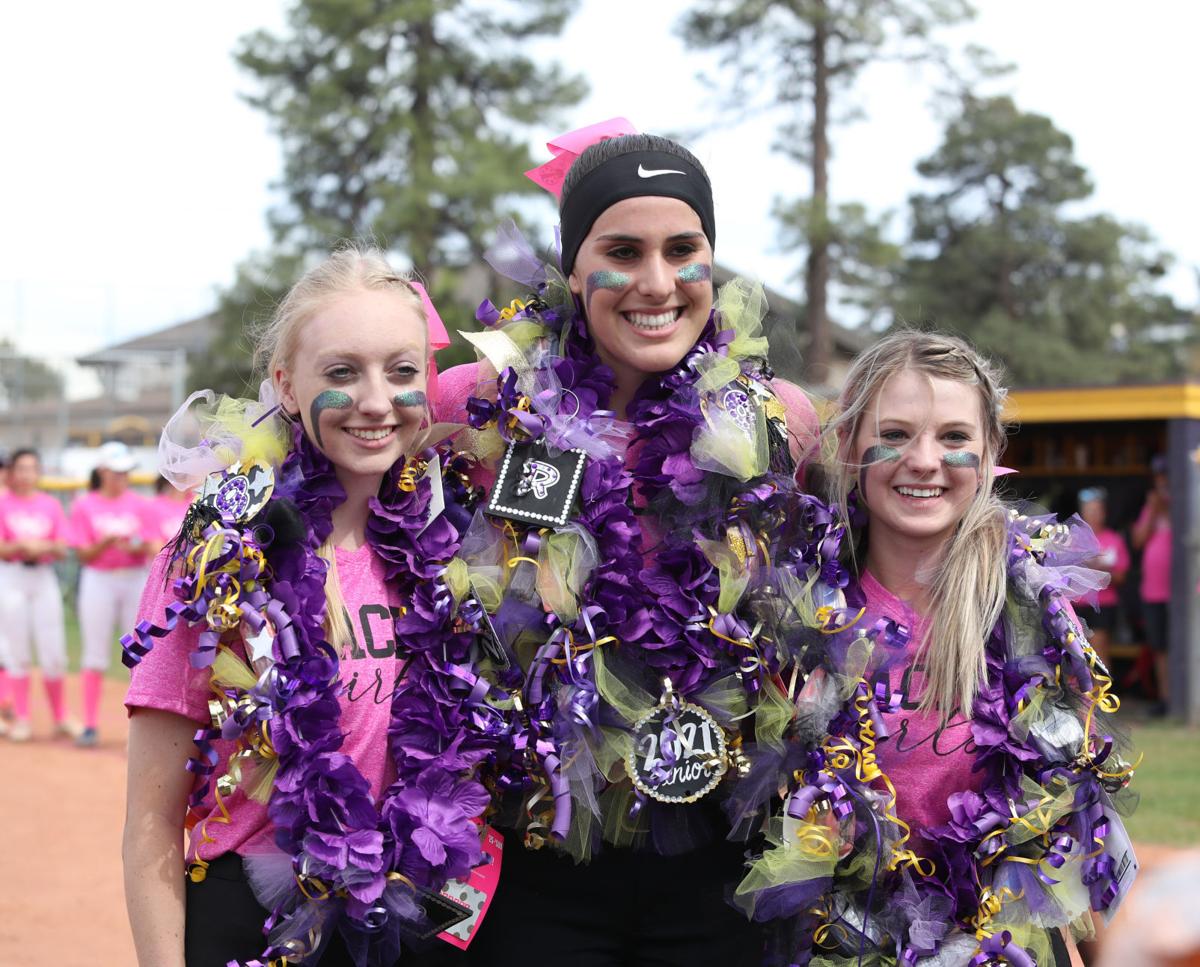 Right fielder Kayde Johnson celebrates after catching the final out in Payson’s 3-2 victory over the #1 team in 2A, Benson, on Saturday. The Bulldogs were 17-0 before the Longhorns beat them to avenge an earlier loss.

Above, right fielder Kayde Johnson celebrates with second baseman Missy Chiccino after Johnson caught the final out of Payson’s 3-2 win over previously unbeaten Benson on Saturday. Below, center fielder Kaylee Boone tries to make a spectacular catch but the ball pops out of her glove when she hit the ground. See the Roundup’s Sports Facebook page for more photos.

Center fielder Kaylee Boone tries to make a spectacular catch against Benson on Saturday but the ball pops out of her glove after she hits the ground.

Kayde Johnson raced in and dropped to her knees as the ball hit her glove.

It was a ball the right fielder simply had to catch.

You know, catch it and you’re a hero, miss it and you and all your teammates and many others depart Payson’s field of dreams dejected. These kinds of losses hurt.

But when you find a way to win these kinds of games, they stand out among all the others.

The junior rose and let out a primal shout as she held the ball in her throwing hand and raced to the infield to celebrate with her teammates.

It’s not every day you snap a team’s 17-game winning streak.

But that’s just what the Longhorns did to previously unbeaten Benson, the #1 team in 2A. Payson rallied for a 3-2 triumph, avenging an 11-0 loss at Benson earlier this season when the Longhorns played without pitcher Raci Miranda, who had a prior commitment.

But she was there with fellow seniors, who took part in a senior night, or in this case day, ceremony before the game.

Payson prevailed one day after a heartbreaking 2-1 10-inning loss at Snowflake that ended the Longhorns’ bid for the 3A East championship. Payson needed to win that game and its final region contest, also against Snowflake, at Payson at 6 p.m. today.

Friday’s loss ended the Longhorns’ hope of winning the region title because they had to win both games against Snowflake to claim the title thanks to an earlier loss to Winslow.

“We knew that going in — that’s what made that loss sting,” said Payson coach Curtis Johnson. “We fell short of the goal, but the real goal is the state playoffs.

“I wasn’t sure how the girls would react the next day. I was pleased the girls met Benson’s level. I think our girls did take a step forward with that win today.”

The #6 Longhorns improved to 16-3. They responded to a 1-0 loss at Winslow to win 5-2 over the Bulldogs in Payson. Now they’ve taken down another team that beat them earlier.

Miranda was one of three Longhorn seniors honored in a ceremony before the game with second baseman Missy Chiccino and third baseman Rebekah Rice. She said they were ready to bounce back from the difficult loss in Snowflake the previous day.

“I guess it’s just understanding that this is a game of failure,” said Miranda of her mindset.

“So, you’re gonna fail. You can’t be perfect all the time and (Snowflake) just got us a little bit better than we got them yesterday.

“But we came back today and we just said, ‘we’re gonna turn it around from yesterday’s loss. We got this.’”

The Longhorns trailed 2-1 with the bases empty and two outs in the bottom of the sixth. But Chiccino singled for her second hit and Rice followed with another single. Both runners moved up on a passed ball before Emily Darwin hit Miranda with a pitch to load the bases for Bree Hall. The sophomore added her name to the list of heroes by punching a 2-2 pitch into shallow right field for a two-run single.

Miranda retired the Bobcats in order in the top of the seventh, with Johnson gloving the final out. Miranda, who’ll move on to pitch at Cal State-Fullerton, scattered six hits, walked two and struck out eight. Just one of Benson’s runs was earned.

Payson managed just four hits off of Darwin but it proved to be enough.

Benson scored a run in the top of the first when Celina Wilharm reached on an infield error, stole second and stole third and came home when the throw to third couldn’t be secured and rolled far enough away for Wilharm to score.

But Payson tied it in the bottom of the inning when Chiccino doubled down the right field line, moved to third on Rice’s sacrifice bunt and scored on a passed ball.

Benson went ahead 2-1 in the fifth when Wilharm, who had three hits, singled to left and scored when the ball came out of center fielder Kaylee Boone’s glove after she hit the ground attempting to make a spectacular diving catch. Chiccino retrieved the ball but her throw to the plate was off the mark.

Both teams wore pink T-shirts, the ones they would have worn during the annual Gracie Lee Haught Classic where they and other teams all show their support in memory of the little girl who tragically lost her life in an accident in 2004. Pink was her favorite color.

But the AIA didn’t allow regular-season tournaments this season because of COVID-19 restrictions. The tournament was also canceled by the weather last year just before the pandemic led to the shutdown of all spring sports.

Benson players also wore pink. The Bobcats are the only team that’s participated in all of the GLH Classics along with Payson.

Miranda didn’t play in Payson’s loss at Benson because of a scheduling issue that required her to honor a prior commitment.

First-round action is at the top eight seeds at 10 a.m. on Saturday, May 8. The brackets will be announced on Thursday.

The Longhorns have one more chance to stake their claim to a first-round home game when they get a rematch with Snowflake at 6 p.m. on Tuesday, May 4.

The region game won’t change the 3A East standings but the Longhorns want to avenge their other loss, just like they have the other two.