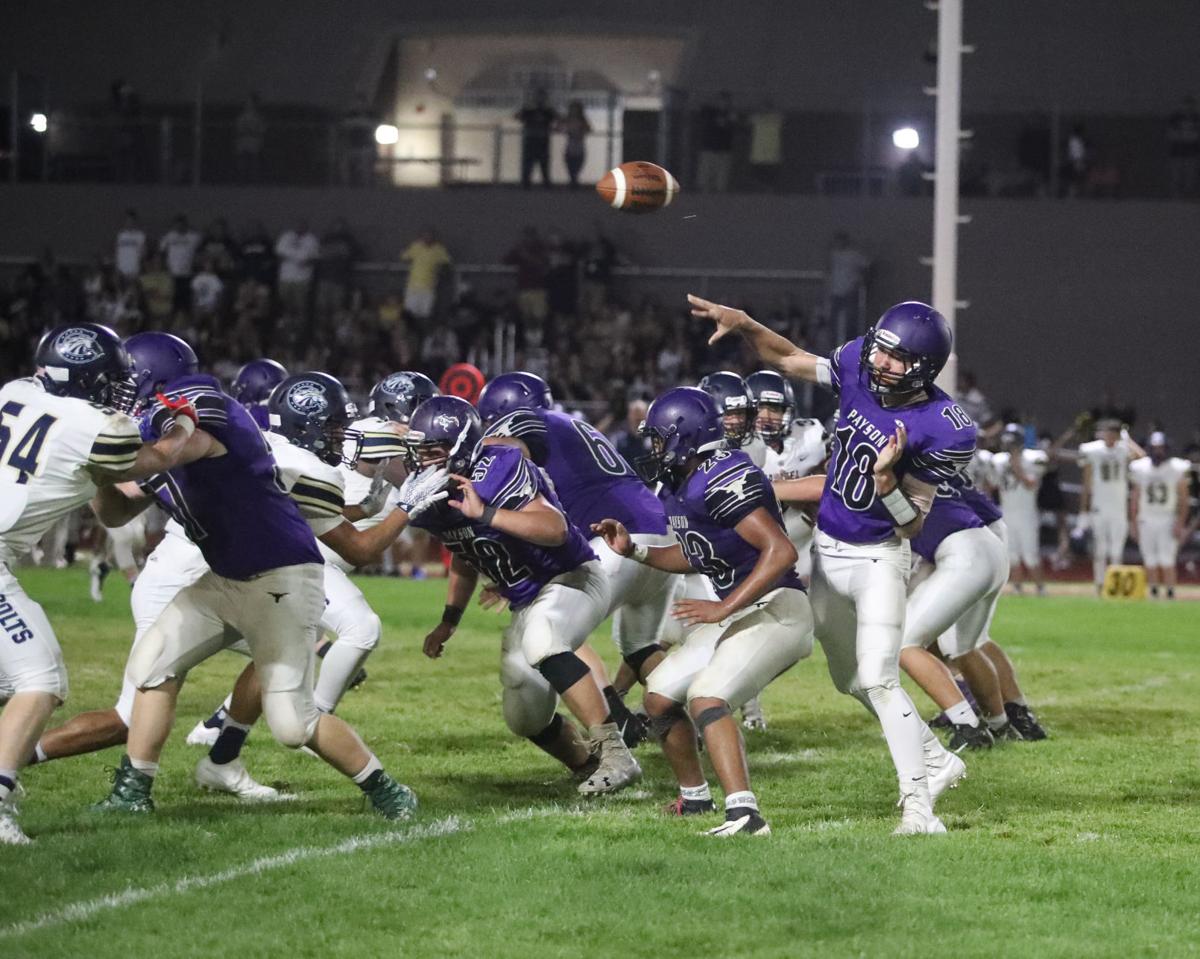 Payson quarterback Brock Davis gets good protection as he gets off a quick pass against Queen Creek Casteel on Friday night. Visit payson.com for game statistics, photos and a video. 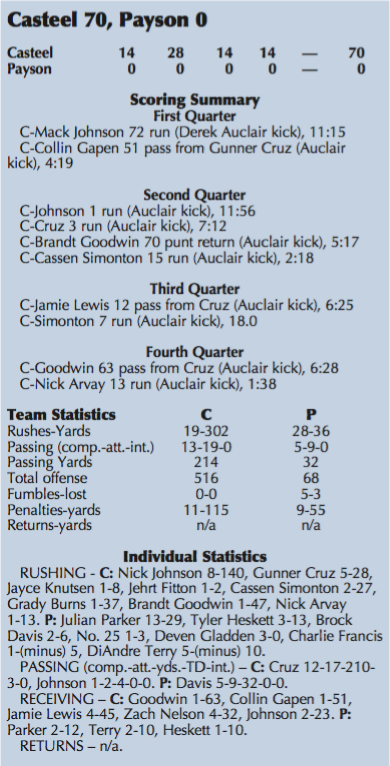 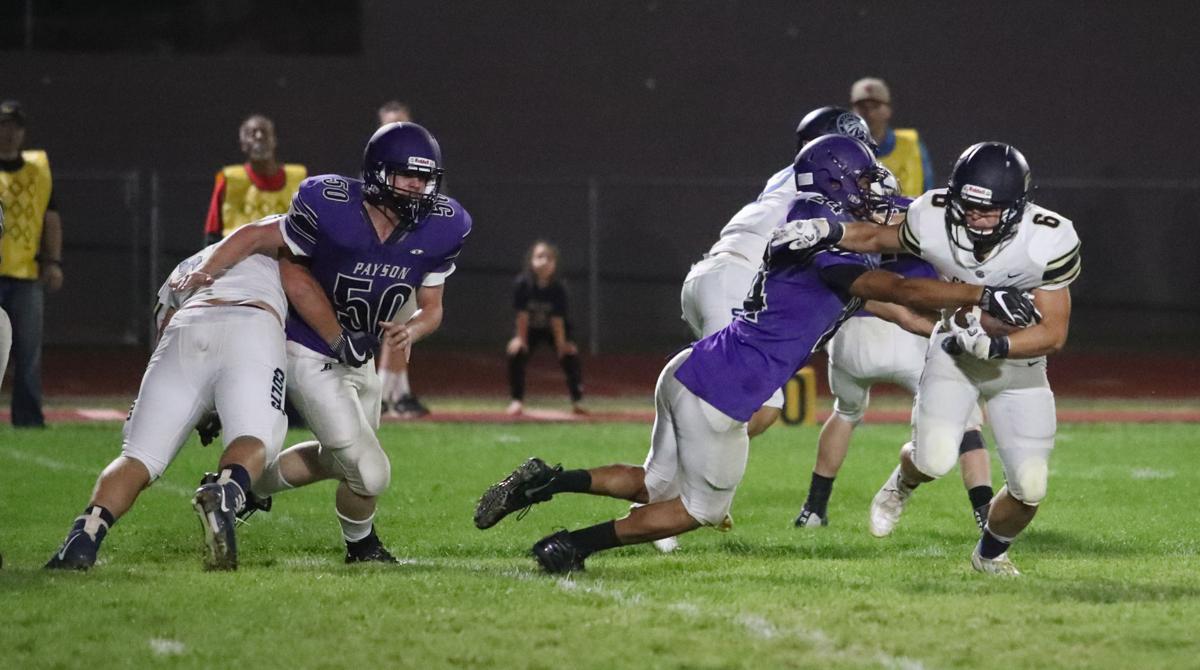 DiAndre Terry tries to rip the football from Queen Creek Casteel's Mack Johnson as another Payson defender gets around an offensive lineman. 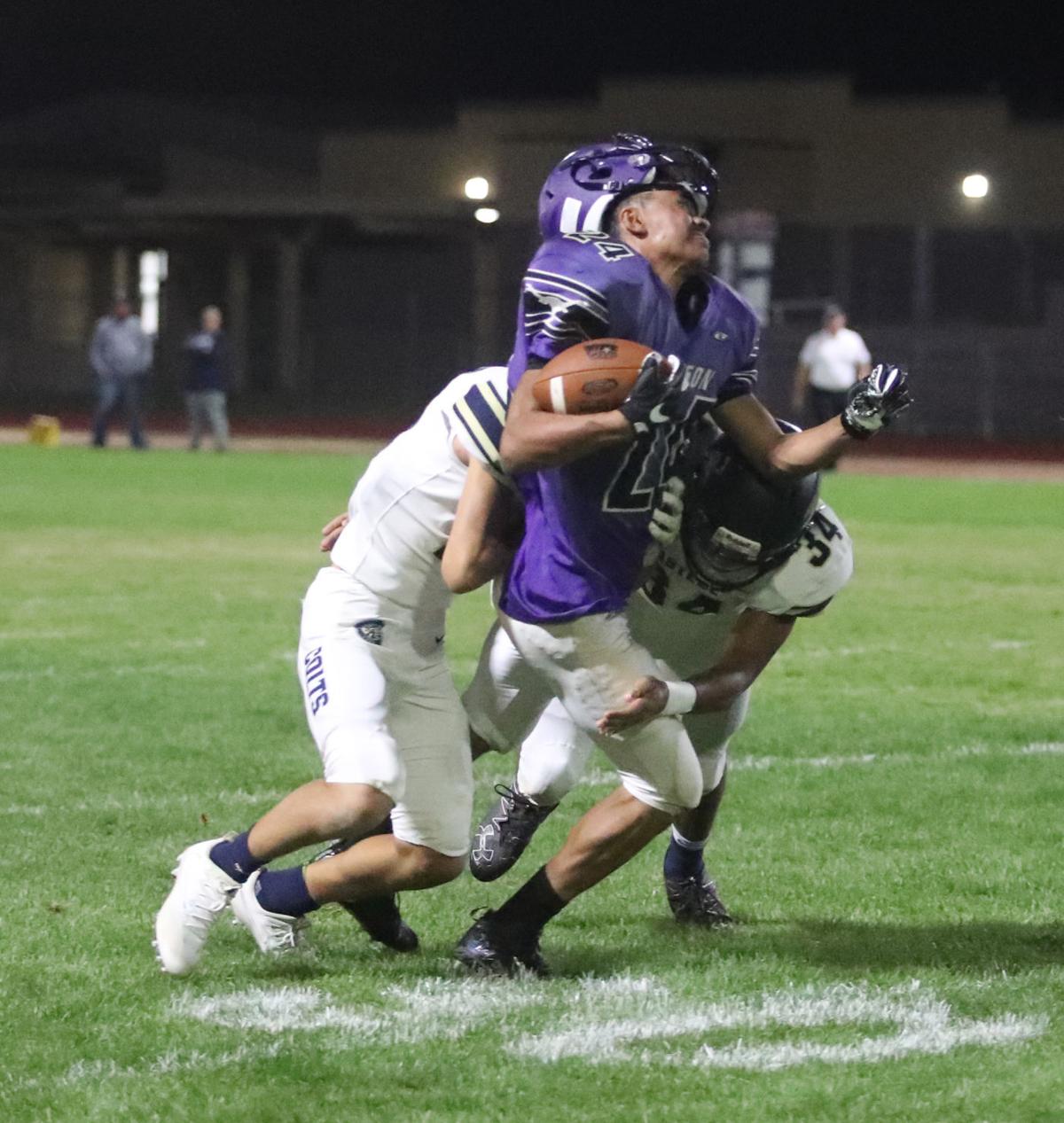 It was a total embarrassment.

Not for the Longhorns, mind you, but for the coaching staff of the visiting Colts.

When you keep your starters in late in a game you have no chance of losing and have 50 players standing on the sideline itching to get in, you should be ashamed of yourself.

How can you have your starting quarterback throw a 60-yard touchdown pass to make it 63-0 with 6:28 remaining?

Finally putting in another quarterback for your final possession and watching him run for a 13-yard TD to wrap up the scoring is fine. But changing your starter then was way too late.

It’s just proper coaching etiquette — pull your starters by the fourth quarter of blowout victories. And don’t throw the ball with a huge lead. You don’t need to take a knee on every snap, just hand it off. If their reserves still manage to score, so be it.

Head coach Spencer Stowers claims he wasn’t trying to run up the score, explaining he wanted to give his starters more than two quarters of playing time to help his team gain valuable experience. He probably said the same thing when his Colts rolled over Globe 71-0 a week earlier.

At 2-0 with two shutouts and 141 points scored, the Arizona Republic’s top-ranked 3A team certainly is an impressive football team.

But they are lacking in character, at least their head coach is. And he’s the person who’s supposed to lead by example.

The Colts are quickly becoming the most hated team in the state.

With the addition of a junior class this year the second-year varsity team is better than it was in a 26-14 win over Payson in the first home game in school history last year. The Longhorns were certainly better at this stage of last season, so the Colts had no opportunity to reveal their lack of class in that game. But there’s clear evidence from last year that this coach just doesn’t understand when enough is enough. The Colts won three games by at least 68 points last season, including a 72-0 trouncing of Phoenix North Pointe Prep. Maybe they’re trying to top that this year. It’s extremely difficult to have time to score 80 points in a game, but it appears that’s the goal. Well, they have eight more chances before the playoffs begin.

With an enrollment that’s expanded from about 800 students last year to approximately 1,200, the Colts hold a distinct advantage over most every team they’ll face this year. And they’re good. So they’re getting the chance to show their character, or lack of it most weeks.

Despite plenty of other options, Stowers kept his starters in way after coaches with an understanding of good sportsmanship would have sent in the subs.

The Colts clearly have the kind of talent and numbers to contend for the 3A state championship. But Stowers is lucky his quarterback or another starter didn’t get seriously injured playing late in a blowout victory.

There is no place in high school sports for this kind of coaching.

One of their players was ejected for a helmet-to-helmet hit on Charles Francis that left the Payson junior lying on the field for at least 10 minutes and teammates and spectators praying for him to escape serious injury. However, officials changed the ruling after reviewing the play at halftime, saying it did not meet the definition in the book for an ejection. They informed the coach at the start of the third quarter that the player was not ejected.

Fortunately, Francis was able to walk off the field with the assistance of defensive coordinator Bryan Burke and former Longhorns standout Atreyu Glasscock. He spent the rest of the game on the bench, which is an encouraging sign since he wasn’t immediately taken to the hospital.

Casteel may very well go on to win the state championship in its final season in Conference 3A before the second-year varsity program moves up to 4A or 5A next year with the addition of its first senior class.

Casteel dressed about 60 players for Friday’s game, about double the roughly 30 Longhorns who suited up. Payson has about 700 students.

Not playing more of those 60 players after jumping out to a 42-0 halftime lead makes no sense.

I wasn’t surprised when the game ended to see Payson head coach Jake Swartwood and his coaching staff walk off the field without going through the traditional postgame handshake as his players did. He wanted to make a statement that he had no respect for the Casteel coaching staff for their unsportsmanlike behavior.

“Casteel showed very little to no class by keeping their starting offense and quarterback in the game in the fourth quarter and throwing the ball when they’re already up by 50-plus points,” Swartwood said. “And I have no interest in engaging in after-the-game routines after coaching mistakes such as that.”

I don’t normally agree with coaches not shaking hands after the game. But this was not a normal game.

I’m not sure what it will take for Stowers and his staff to change their behavior.

Maybe Jake and his staff delivered a message he’ll hear.

What goes around comes around. One day, coach, you’ll be on the other end of a game like this facing a coach who’s clueless about integrity and decides to run up the score against your team. If you don’t realize what a big mistake you’ve been making every week by then, I hope that’s the moment you begin to understand the importance of good sportsmanship. I wonder if you’ll shake hands with the coach on the other side of the field that night.

I fear the Colts will continue this behavior the rest of the season and wind up winning the championship.

But I know a lot of Longhorns hoping karma pays them a visit somewhere down the playoff road.

Do you agree with Mayor Tom Morrissey's decision to require masks in Payson?